AUSTIN, Texas — Researchers from Amherst College and The University of Texas at Austin have described a new technique that might one day reveal in higher detail than ever before the composition and characteristics of the deep Earth.

There’s just one catch: The technique relies on a fifth force of nature (in addition to gravity, the weak and strong nuclear forces and electromagnetism) that has not yet been detected, but which some particle physicists think might exist. Physicists call this type of force a long-range spin-spin interaction. If it does exist, this exotic new force would connect matter at Earth’s surface with matter hundreds or even thousands of kilometers below, deep in Earth’s mantle. In other words, the building blocks of atoms—electrons, protons, and neutrons—separated over vast distances would “feel” each other’s presence. The way these particles interact could provide new information about the composition and characteristics of the mantle, which is poorly understood because of its inaccessibility. 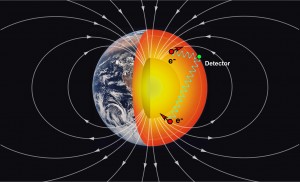 The picture depicts the long-range spin-spin interaction (blue wavy lines) in which the spin-sensitive detector on Earth’s surface interacts with geoelectrons (red dots) deep in Earth’s mantle. The arrows on the geoelectrons indicate their spin orientations, opposite that of Earth’s magnetic field lines (white arcs). Illustration by: Marc Airhart (University of Texas at Austin) and Steve Jacobsen (Northwestern University). (Click image for larger view)

“The most rewarding and surprising thing about this project was realizing that particle physics could actually be used to study the deep Earth,” says Jung-Fu “Afu” Lin, associate professor at The University of Texas at Austin’s Jackson School of Geosciences and co-author of the study appearing this week in the journal Science.

This new force could help settle a scientific quandary. When earth scientists have tried to model how factors such as iron concentration and physical and chemical properties of matter vary with depth — for example, using the way earthquake rumbles travel through the Earth or through laboratory experiments designed to mimic the intense temperatures and pressures of the deep Earth — they get different answers. The fifth force, assuming it exists, might help reconcile these conflicting lines of evidence.

Earth’s mantle is a thick geological layer sandwiched between the thin outer crust and central core, made up mostly of iron-bearing minerals. The atoms in these minerals and the subatomic particles making up the atoms have a property called spin. Spin can be thought of as an arrow that points in a particular direction. It is thought that Earth’s magnetic field causes some of the electrons in these mantle minerals to become slightly spin-polarized, meaning the directions in which they spin are no longer completely random, but have some preferred orientation. These electrons have been dubbed geoelectrons.

The goal with this project was to see whether the scientists could use the proposed long-range spin-spin interaction to detect the presence of these distant geoelectrons. 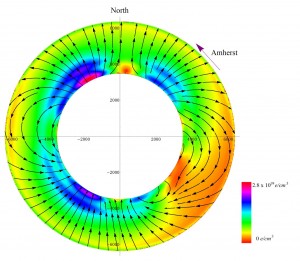 The polarized electron-spin density on a plane that contains Earth’s rotation axis and Amherst, Mass., generated by a computer simulation. The black arrows indicate only the direction of the electron spins, while the color shading of the plot indicates the magnitude of the polarized electron spin density. The density of the arrows on the plot is not meaningful. The component of the field into or out of the page is not shown. The electron spin density within the core (white central circle) is assumed to be zero. The violet arrow corresponds to the north orientation and location of the Amherst apparatus. The vertical axis is along Earth’s rotation axis, and the axis labels have units of kilometers. Image Credit: Daniel Ang and Larry Hunter (Amherst College). (Click image for larger view)

The researchers, led by Larry Hunter, professor of physics at Amherst College, first created a computer model of Earth’s interior to map the expected densities and spin directions of geoelectrons. The model was based in part on insights gained from Lin’s laboratory experiments that measure electron spins in minerals at the high temperatures and pressures of Earth’s interior. This map gave the researchers clues about the strength and orientations of interactions they might expect to detect in their specific laboratory location in Amherst, Mass.

Second, the researchers used a specially designed apparatus to search for interactions between geoelectrons deep in the mantle and subatomic particles at Earth’s surface. The team’s experiments essentially explored whether the spins of electrons, neutrons or protons in various laboratories might have a different energy, depending on the direction with respect to the Earth that they were pointing.

“We know, for example, that a magnet has a lower energy when it is oriented parallel to the geomagnetic field and it lines up with this particular direction — that is how a compass works,” explains Hunter. “Our experiments removed this magnetic interaction and looked to see if there might be some other interaction with our experimental spins. One interpretation of this ‘other’ interaction is that it could be a long-range interaction between the spins in our apparatus and the electron spins within the Earth, that have been aligned by the geomagnetic field. This is the long-range spin-spin interaction we were looking for.”

Although the apparatus was not able to detect any such interactions, the researchers could at least infer that such interactions, if they exist, must be incredibly weak — no more than a millionth of the strength of the gravitational attraction between the particles. That’s useful information as scientists now look for ways to build ever more sensitive instruments to search for the elusive fifth force.

“No one had previously thought about the possible interactions that might occur between the Earth’s spin-polarized electrons and precision laboratory spin-measurements,” says Hunter.

“If the long-range spin-spin interactions are discovered in future experiments, geoscientists can eventually use such information to reliably understand the geochemistry and geophysics of the planet’s interior,” says Lin.

Funding for this research was contributed by the National Science Foundation (grants PHY-0855465, PHY-1205824, EAR-1056670 and EAR-1053446), the Department of Energy’s Center for Energy Frontier Research in Extreme Environments (EFree), and the Carnegie/DOE Alliance Center (CDAC).

*Source: The University of Texas at Austin (Published on February 21, 2013)