Many people use tree ring records to see into the past. But redwoods – the iconic trees that are the world’s tallest living things – have so far proven too erratic in their growth patterns to help with reconstructing historic climate.

A University of Washington researcher has developed a way to use the trees as a window into coastal conditions, using oxygen and carbon atoms in the wood to detect fog and rainfall in previous seasons.

“This is really the first time that climate reconstruction has ever been done with redwoods,” said Jim Johnstone, who recently completed a postdoctoral position at the UW-based Joint Institute for the Study of the Atmosphere and the Ocean. He is corresponding author of a study published online Oct. 24 in the Journal of Geophysical Research-Biogeosciences.

While coastal redwoods are not the longest-lived trees on the West Coast, they do contain unique information about their foggy surroundings. 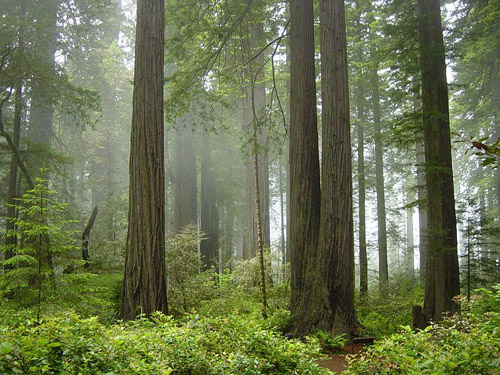 The new study used cores from Northern California coastal redwoods to trace climate back 50 years. Weather records from that period prove the method is accurate, suggesting it could be used to track conditions through the thousand or more years of the redwoods’ lifetime.

Tree-ring research, or dendrochronology, typically involves a detailed look at a cross-section of a tree trunk. But the rings of a redwood are uneven and don’t always fully encircle the tree, making it a poor candidate for anything except detecting historic fires.

The new paper uses a painstaking approach that’s more like processing ice cores. It uses the molecules captured in the wood to sample the atmosphere of the past.

Most oxygen in Earth’s atmosphere has an atomic mass of 16, making it O-16, but a small percentage of oxygen is the heavier O-18 isotope. When seawater evaporates off the ocean to form clouds, some drops fall as rain over the ocean, and more of the heavier O-18 molecules rain out. The remaining drops that fall on land thus have a higher proportion of the lighter O-16 molecules.

Fog, on the other hand, forms near shore and blows on land where it drips down through the branches until the trees use it like rainwater.

By looking at the proportion of O-16 and O-18 in the wood from each season, the team was able to measure the contribution of fog and rain. They looked at the spring growth, from April to June, as well as the fall growth, from August to October. Researchers also analyzed carbon atoms to measure the total amount of moisture in the air.

“We actually have two indicators that we can use in combination to determine if a particular summer was foggy with a little rain, foggy with a lot of rain, and various combinations of the two,” Johnstone said.

Related research by Johnstone shows that the amount of West Coast fog is closely tied to the surface temperature of the ocean, so redwoods may be able to tell us something about the long-term patterns of ocean change, such as the Pacific Decadal Oscillation. Understanding of the natural variability cycles could also help to better distinguish natural and human-caused climate change.

“It’s possible that the redwoods could give us direct indication of how that’s worked over longer periods,” Johnstone said. “This is just a piece that contributes to that understanding in a pretty unique place.”

Johnstone conducted the research as part of his doctoral work at the University of California, Berkeley, where he was advised by co-author Todd Dawson. The other co-author is John Roden at Southern Oregon University. The research was funded by the National Science Foundation.