A mutation as minute as swapping just one amino acid can completely change the target that a virus will bind to on a victim cell — potentially shifting what kind of cell and eventually what kind of organism a virus could infect.

PROVIDENCE, R.I. [Brown University] — In a new study published online in the journal PLoS Pathogens, an international team of scientists showed that by swapping a single amino acid they could change the sugar to which the human BK polyomavirus will binds on the surface of cells. The BK polyomavirus lost the ability to bind its usual target sugar and instead “preferred” the same sugar as its cousin SV40 polyomavirus, which is active in monkeys.

The researchers were working in cell cultures with safe pseudoviruses, which cannot spread, so they did not show that the pseudovirus changed its infectivity from one species to another, but the finding provides a novel demonstration of how easily the binding target of a virus can change as its structure mutates and evolves.

Different cells have different bindings targets on their surfaces. A change in a virus’s binding target preference can be a key step in changing how that virus would affect different cells in a victim — or move on to a different species.

“I think it’s one of the first, if not the first, times that a receptor switch of this nature has been identified,” said Brown University virologist Walter Atwood, a corresponding author of the paper published Oct. 10, 2013. “There are dozens of viruses that use these kinds of sugars as receptors. What we’re showing is that it doesn’t take much to convert from using one type of sugar to using another type of sugar. It helps us to understand evolutionarily how these viruses may adapt to a new host.” 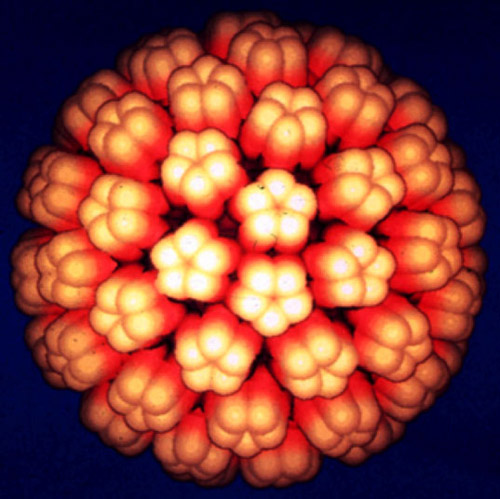 The binding sites on the surface of the of the BK polyomavirus, called capsomers, each have five monomers. Scientists found that changing just one amino acid in these monomers caused the virus to bind to an entirely different receptor on targeted cells than before. Image credit: Atwood lab/Brown University

Brown postdoctoral researcher Stacy-ann Allen, one of two lead authors on the paper, said the team learned of the single amino acid difference by comparing high-resolution structural models of the two polyomaviruses bound to their favorite sugars. Collaborators, including co-lead author Ursula Neu and co-correspondng author Thilo Stehle at the University of Tübingen in Germany, produced those models using nuclear magnetic resonance spectroscopy.

“We had the structures and sequences of both BK and SV40, and they are relatively similar in their amino acid identity,” Allen said. “So when you see minute differences between them, you can target these differences to ask whether this difference allows for different infection in different hosts.”

Sure enough, when Allen made the change at amino acid site 68 in the BK polyomavirus, it switched from binding the “ganglioside” sugar GD3 to binding with GM1.

Allen and colleagues tested this not only in cells in the lab, but also by dropping the viruses onto microarrays of binding target sugars.

And for even more confirmation, the Brown scientists sent the mutated BK viruses back to Germany for more NMR resolution.

“The NMR spectrum of the BK and the SV40 were identical,” Atwood said, “They thought they had mixed up the samples. They were identical in terms of their ability to bind to GM1, the monkey receptor.” 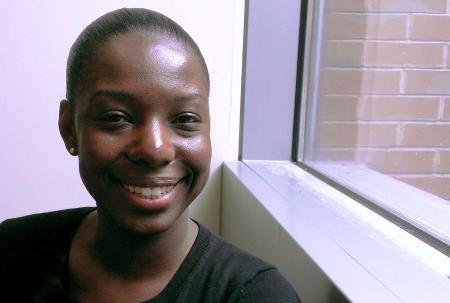 Stacy-ann Allen. When you know the structures and sequences of two viruses and see only minute differences, “you can target these differences to ask whether this difference allows for different infection in different hosts.” Image credit: David Orenstein/Brown University

It may take several steps beyond a switch of receptor preference for a virus to infect new cells in the body or entirely new species, but such a switch could be a key step in more viruses than just the polyomavirus family, the scientists said. Others seem to switch preferences fairly quickly.

“Prominent examples include different serotypes of adenoviruses, the canine and feline paroviruses, as well as avian, swine, and human influenza viruses,” they wrote in PLoS Pathogens.

In addition to Atwood, Allen, Neu, and Stihle, other authors on the paper are Barbel Blaum and Luisa Stroh of Tübingen; Yan Liu, Angelina Palma and Ten Fiezi of Imperial College London; Martin Frank of Biognos in Sweden; and Thomas Peters of the University of Lübeck in Germany.