Researchers from North Carolina State University, the University of North Carolina at Chapel Hill and Laser Zentrum Hannover have discovered that a naturally-occurring compound can be incorporated into three-dimensional (3-D) printing processes to create medical implants out of non-toxic polymers. The compound is riboflavin, which is better known as vitamin B2.

“This opens the door to a much wider range of biocompatible implant materials, which can be used to develop customized implant designs using 3-D printing technology,” says Dr. Roger Narayan, senior author of a paper describing the work and a professor in the joint biomedical engineering department at NC State and UNC-Chapel Hill.

The researchers in this study focused on a 3-D printing technique called two-photon polymerization, because this technique can be used to create small objects with detailed features – such as scaffolds for tissue engineering, microneedles or other implantable drug-delivery devices. 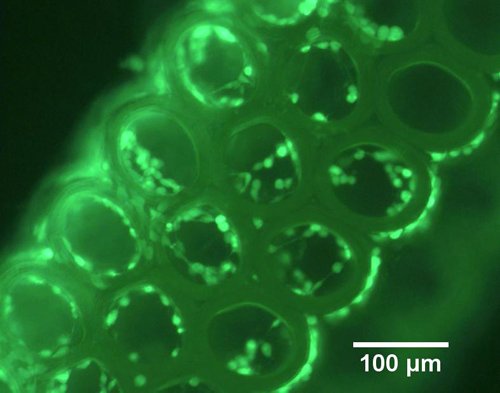 Two-photon polymerization has its drawbacks, however. Most chemicals mixed into the precursors to make them photoreactive are also toxic, which could be problematic if the structures are used in a medical implant or are in direct contact with the body.

But now researchers have determined that riboflavin can be mixed with a precursor material to make it photoreactive. And riboflavin is both nontoxic and biocompatible – it’s a vitamin found in everything from asparagus to cottage cheese.