AUSTIN, Texas — The painful, potentially deadly stings of bark scorpions are nothing more than a slight nuisance to grasshopper mice, which voraciously kill and consume their prey with ease. When stung, the mice briefly lick their paws and move in again for the kill.

The grasshopper mice are essentially numb to the pain, scientists have found, because the scorpion toxin acts as an analgesic rather than a pain stimulant.

The scientists published their research in Science.

Ashlee Rowe, lead author of the paper, previously discovered that grasshopper mice, which are native to the southwestern United States, are generally resistant to the bark scorpion toxin, which can kill other animals.

It is still unknown why the toxin is not lethal to the mice.

“This venom kills other mammals of similar size,” said Rowe, Michigan State University assistant professor of neuroscience and zoology. “The grasshopper mouse has developed the evolutionary equivalent of martial arts to use the scorpions’ greatest strength against them.” 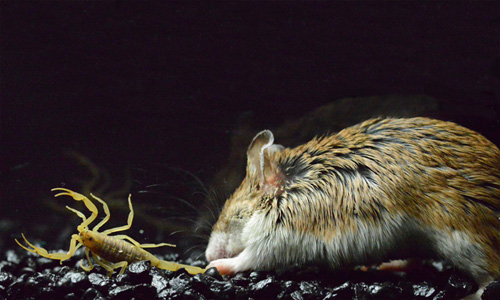 A grasshopper mouse attacks a bark scorpion. Researchers have discovered that the mouse feels little pain from the sting of the scorpion. Image credit: Ashlee Rowe.

Rowe, who conducted the research while at The University of Texas at Austin, and her colleagues ventured into the desert and collected scorpions and mice for their experiments.

“This seemed completely ridiculous,” said Harold Zakon, professor of neuroscience at The University of Texas at Austin. “One would think that the venom would at least cause a little more pain than the saline solution. This would mean that perhaps the toxin plays a role as an analgesic. This seemed very far out, but we wanted to test it anyway.”

Rowe and Zakon discovered that the bark scorpion toxin acts as an analgesic by binding to sodium channels in the mouse pain neurons, and this blocks the neuron from firing a pain signal to the brain.

Pain neurons have a couple of different sodium channels, called 1.7 and 1.8, and research has shown that when toxins bind to 1.7 channels, the channels open, sodium flows in and the pain neuron fires.

By sequencing the genes for both the 1.7 and 1.8 sodium channels, the scientists discovered that channel 1.8 in the grasshopper mice has amino acids different from mammals that are sensitive to bark scorpion stings, such as house mice, rats and humans. They then found that the scorpion toxin binds to one of these amino acids to block the activation of channel 1.8 and thus inhibit the pain response.

“Incredibly, there is one amino acid substitution that can totally alter the behavior of the toxin and block the channel,” said Zakon.

The riddle hasn’t been completely solved just yet, though, Rowe said.

“We know the region of the channel where this is taking place and the amino acids involved,” she said. “But there’s something else that’s playing a role, and that’s what I’m focusing on next.”

Some resistance to prey toxins in mammals has been found in other species. The mongoose, for example, is resistant to the cobra. And naked mole rats’ eyes do not burn in pain when carbon dioxide builds up in their underground tunnels.

This study, however, is the first to find that an amino acid substitution in sodium channel 1.8 can have an analgesic effect.

Rowe said studies such as this could someday help researchers target these sodium channels for the development of analgesic medications for humans.

Additional researchers contributing to this study include: Yucheng Xiao, associate faculty member, and Ted Cummins, professor of pharmacology and toxicology, at the Indiana University School of Medicine; Matthew Rowe, professor of zoology at Michigan State University.