Tania Roth studies what happens to the brain when stress occurs early in life, seeking to pinpoint how those kinds of bad experiences can cause molecular changes to DNA.

Now, by participating in a national consortium of researchers, the assistant professor of psychology at the University of Delaware is hoping to use her expertise to contribute to a better understanding of posttraumatic stress disorder (PTSD).

PTSD has gained attention in recent years because of its rates of occurrence among soldiers who served in wars in Iraq and Afghanistan; more than 200,000 returning combat troops have been diagnosed with the disorder. But, Roth noted, many cases also occur outside the military — among victims of violent crimes and survivors of serious car accidents, for example. 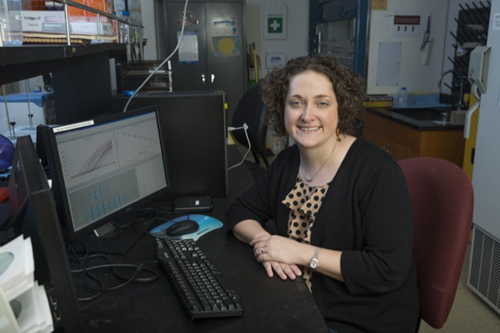 Draper Laboratory, a nonprofit research and development organization based in Cambridge, Mass., which created the PTSD consortium, estimates that 8 percent of Americans will suffer from the disorder at some point in their lives. The condition can lead to panic attacks, substance abuse, depression, suicide and medical problems including cardiovascular disease.

Roth is one of about 20 researchers involved in the group effort to find objective biomarkers that could be used to diagnose PTSD. Currently, the disorder is identified through patients’ reports of their symptoms and experiences.

“We know from animal models that stress does change the brain, so we know there must be a way to measure it objectively,” Roth said. “By looking at various biomarkers — hormone levels, genes, brain imaging — we hope to come up with a way to assist a psychiatrist or psychologist in making an assessment of PTSD. This wouldn’t replace the clinical assessments that are done now, but it could supplement them.”

Roth, who has been interested since graduate school in the effects of early-life experiences on the brain, works in the area of behavioral epigenetics, or the study of specific molecular modifications that change gene expression and produce short- and long-term effects on physiology and behavior. She uses a rodent model to investigate the relationship between environmental experiences and life-long patterns of gene expression and behavior. Roth’s work focuses on DNA methylation — a chemical change in the brain that is important for cell development and gene expression.

She began collaborating with David Diamond at the University of South Florida, who was researching PTSD, to investigate whether these interactions between genes and the environment play a role in the disorder. That work brought both Roth and Diamond into the Draper consortium.

“No one of us could do this alone,” Diamond said. “But collaboratively, we will be able to create a solution to one of the most expensive health care problems our nation is facing in both cost and human toll.”