Researchers at Michigan State University have discovered a protein that does its best work with one foot in the grave.

The study, which appears in the current issue of the Journal of Biological Chemistry, focuses on the nontraditional lifestyle of Retinoblastoma tumor suppressor proteins, which could lead to new ways to treat cancer.

“Retinoblastoma proteins are unique in that they use controlled destruction to do their jobs in a timely but restrained fashion,” said Liang Zhang, a lead author and MSU cell and molecular biology graduate student. “This is an unusual way for proteins to act.” 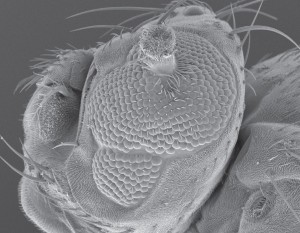 MSU researchers have discovered a protein that does its best work with one foot in the grave. Image courtesy of MSU.

As an organism grows, proteins essential for fueling its prosperity typically toe a tight line, performing their jobs at the right place and time. If these proteins go rogue, disasters such as cancer can result.

Retinoblastoma proteins, which could be labeled as rebellious ­as opposed to rogue, perform acts of valor rather than destruction. And just like fireworks, they save their best work for the finale. 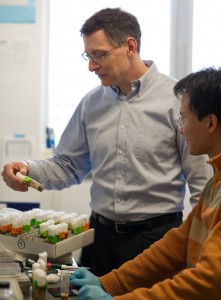 Proteins’ lifecycles end with degradation, and like most living things they become weaker and less efficient at their jobs near the end of their lives. For Retinoblastoma proteins, however, their destruction is linked to their ability to efficiently control excessive cell growth.

Using the fruit fly Drosophila, MSU researchers isolated the specific region that controls the protein’s ability to degrade. Strikingly, this is the same region the protein uses to hit its stride and exert its full power to suppress genes related to unrestrained cell growth. Other categories of genes, such as those linked to cell death, may not be influenced by this specific region that controls degradation. This sheds light on a single mechanism that controls both living and dying at the genetic level.

Identifying this mechanism in fruit flies could be beneficial to humans. David Arnosti, MSU biochemist and director of MSU’s Gene Expression in Disease Development initiative, noted the genetic similarities between humans and Drosophila, describing fruit flies as “resembling little people with wings.”

“By revealing the molecular details about the regulation of the fly Retinoblastoma protein, we can start to understand the possible roles of the human counterparts in cancer,” he said.

The research was a product of NIH-funded research between the laboratories of Arnosti and R. William Henry, MSU biochemist.