In colonial times, the Eastern wild turkey was abundant in Delaware. But by the late 1800s, wild turkeys were gone, eradicated by over-zealous market hunters and habitat destruction.

Usually, that’s the end of the story for a species.

Sometimes, however, species can be re-introduced to their original habitats. Such has been the case with the Eastern wild turkey, one of Delaware’s greatest conservation success stories, says Matt DiBona, a wildlife biologist with the Division of Fish and Wildlife in the state’s Department of Natural Resources and Environmental Control (DNREC).

In 1984, 34 Eastern wild turkeys from Pennsylvania, New Jersey and Vermont were given new homes in the woodlands of Sussex. In the 1990s, 100 wild turkeys from New York were released; in 2002 they were joined by another 33 birds from South Carolina and Virginia.

Throughout this period, turkeys in Sussex were captured and released further north to ensure distribution statewide.

This starter stock of 167 birds and their descendants have been prolific. “Today, Delaware’s wild turkey population is established and continues to spread,” says DiBona. “The population established so quickly that seven years after re-introduction we were able to offer a limited hunting season. We’ve continued to hold an annual four-week spring hunting season for gobblers.”

However, the Eastern wild turkey’s re-introduction to Delaware hasn’t been an unequivocal success story. About 20 years ago there was a population decline. It wasn’t widespread and numbers picked up after that. But Division of Fish and Wildlife officials realized the agency needs to better understand the population dynamics of wild turkeys. 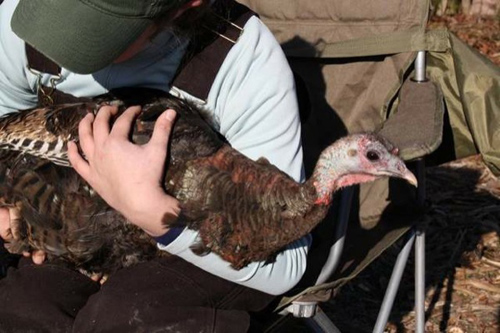 Three years ago, the Division of Fish and Wildlife teamed up with Jake Bowman, a University of Delaware associate professor of wildlife ecology, to get a better handle on potential limiting factors affecting turkey production. “This is especially important because the number of turkey hunters is continuing to increase each year,” notes DiBona. “We thought it prudent to do research on these birds now to help provide some context for our harvest data.”

“The research project focused on hen reproduction, including the number of eggs laid and the survival rate of the poults (the babies), to determine reasons for population decrease,” says Bowman.

But you can’t figure out how many eggs a particular hen laid if you can’t distinguish her from the other hens – or find her, for that matter. That’s where turkey backpacks come into the story. 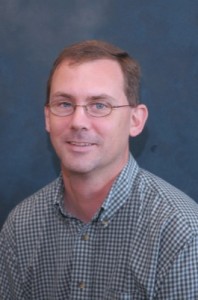 Seventy-six hens at Redden State Forest, near Georgetown, were equipped with little backpack transmitters. The transmitter, which is fastened under the hen’s wings with elastic cords, produces a radio frequency that can be detected up to a mile away.

During breeding season, Bowman’s grad students were at the state forest every day and at least several times a week other times of the year. Although Bowman’s teaching responsibilities kept him busy, at least once a week he participated in the fieldwork.

“You’re out there at all hours of the day and night, when it’s raining, when it’s hot,” he says. “But it’s great. I find research into native species such as the wild turkey more rewarding than study abroad trips I lead to places like Tanzania and Cambodia. There you’re just observing. But with research like this, you’re the one trying to find the answers.”

And Bowman and his team have found some of those answers. They’ve discovered that hens that nested on private land hatched more nests than those on public land, probably because of a difference in vegetation. They discovered that the average number of eggs per nest was eight, compared to the 10-14 eggs per nest seen in other states. Nesting success rates in Delaware are low compared to nearby states. In 2011 just 19 percent of the nests resulted in poults. The research team also discovered that fox and owl predation is a big problem, not only for the poults but for the mother hens.

There is good news to report, too. “Poult survival is greater in Delaware compared to other states, allowing for new birds to be recruited into the population,” says Bowman.

Although Bowman is wrapping up his project, the Division of Fish and Wildlife continues to track data in a variety of ways, including its seasonal Wild Turkey Survey.

“This is a citizen-scientist project; you don’t need to be a wildlife biologist to contribute,” says DiBona. “If you see wild turkeys on your drive to work or when you’re walking on a Sunday afternoon, we want to know about it.”

For example, Jason Beale, manager of Abbott’s Mill Nature Center, reported that he saw an adult hen with seven poults on Aug. 8. He’s participated in the survey for the past two years.

“I’ve lived in Delaware since 2006. I know that in 2011 and 2012 I saw more wild turkeys than in all the other years combined,” says Beale. “We see them in Lee Meadow here at Abbott’s Mill. Isaacs-Green Preserve is another good spot to see them.”

“Even when you don’t see them, you know they’re here,” adds Beale. “At overnight camps we can hear them gobble at dawn and dusk and we routinely see turkey tracks on the trails.”

To participate in the 2013 Wild Turkey Survey, contact Matt DiBona at 735-3600 or matthew.dibona@state.de.us.