Photo Proof: Super Stars of the Universe Have Humble Beginnings

ANN ARBOR, Mich.—The first close-up picture of a nascent super massive star and its surroundings has shown that the highest mass stars in the universe form just like their smaller counterparts. They are born from swirling disks of gas and dust, rather than from violent stellar collisions.

“How these high mass stars form has been a debate for 20 years,” said Stefan Kraus, a research fellow in the University of Michigan Department of Astronomy who is first author of a paper on the findings published July 15 in Nature.

The star they studied is only about 60,000 years old. The sun, by contrast, is about 4.6 billion years old.

The researchers used a technique called interferometry, which combined the light gathered by multiple separate telescopes to achieve the resolving power of an 85-meter telescope. For their observations, they used the Very Large Telescope Interferometer of the European Southern Observatory (ESO) in Chile. The resulting resolution is equivalent to picking out the head of a screw on the International Space Station from Earth, or more than 10 times the resolution possible with current visible-light telescopes in space, according to ESO. 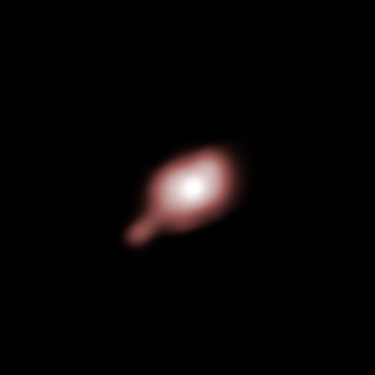 About the image above: Astronomers have obtained the first image of a dusty disc closely encircling a massive baby star, providing direct evidence that massive stars form in the same way as their smaller brethren—and closing an enduring debate. In order to discover and understand the properties of this disc, the astronomers employed European Southern Observatory’s Very Large Telescope Interferometer. Image credit: ESO/S. Kraus

The approach allowed them to essentially zoom in a nameless young star 10,000 light years away in the Centaurus constellation in the southern sky. They produced infrared images detailed enough to show the shape of a dissipating disk. These very young stars are still deeply embedded in their stellar nurseries and cannot be observed in visible light. However, infrared light can escape the dusty cocoon.

“With a 10-meter telescope, this star is just a point,” Kraus said. “With interferometry, we can resolve the disk. The disk structure is very similar to the one observed around young low-mass stars and that’s remarkable.”

High-mass stars such as this one are relatively rare in the universe. Only about one of every hundred newborn stars grows to more than 10 times the mass of the Sun. For the past two decades, theoreticians have struggled with serious questions about how these stars form. They understood that for low-mass stars, stellar growth requires the presence of a circumstellar disk.

But high-mass stars, in contrast, produce strong stellar winds and radiation pressure during their birth, which could halt disk formation. Therefore, some scientists proposed dramatic alternative processes, Kraus said, such as stellar merging. The new observations provide compelling evidence that even these giant stars form through disks. 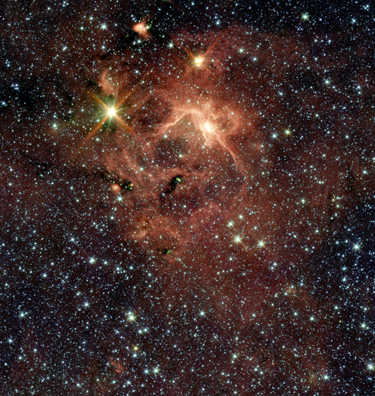 About the image above: The young star IRAS 13481-6124, as seen through the NASA Spitzer Space Telescope. Using a technique called interferometry and European Southern Observatory instruments and telescopes, astronomers were able to zoom in to observe the dusty disk closely encircling the star. Detection of this disk provides direct evidence that massive stars form in the same way as their smaller brethren—and closes an enduring debate. Image credit: ESO/Spitzer/NASA/JPL/S. Kraus

“All the material that we see around us is made of the products of a massive star that exploded in a supernova in our neighborhood a few tens of billions of years ago,” he said. “You need massive stars to produce the heavy elements from which ourselves our made.”

Using archived images from NASA’s Spitzer Space Telescope and observations with ESO’s APEX 12-metre sub-millimeter telescope in Chile, astronomers first detected a jet emanating from this star, hinting at the presence of a disk. They then confirmed the disk with their interferometric observations.

The paper is titled “A hot compact dust disk around a massive young stellar object.”

The research was funded in part by NASA.

1 comment on “Photo Proof: Super Stars of the Universe Have Humble Beginnings”