Complex organic compounds, including many important to life on Earth, were readily produced under conditions that likely prevailed in the primordial solar system. Scientists at the University of Chicago and NASA Ames Research Center came to this conclusion after linking computer simulations to laboratory experiments.

Fred Ciesla, assistant professor in geophysical sciences at UChicago, simulated the dynamics of the solar nebula, the cloud of gas and dust from which the sun and the planets formed. Although every dust particle within the nebula behaved differently, they all experienced the conditions needed for organics to form over a simulated million-year period. 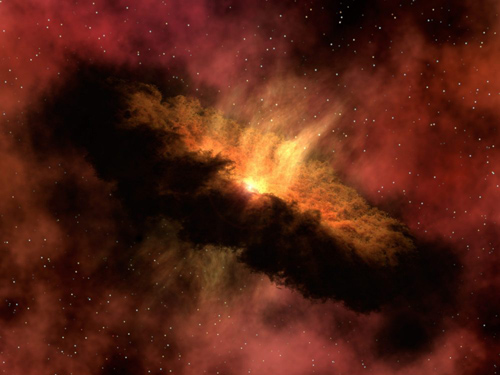 NASA’s Spitzer Space Telescope observed a fledgling solar system like the one depicted in this artist’s concept. New computer simulations at the University of Chicago show that turbulence lofts dust particles above the illuminated portion of the cloud, where they become exposed to high levels of ultraviolet light from nearby stars. UV irradiation was a key component in the production of complex organic molecules in the early solar system. Image courtesy of NASA/JPL-Caltech

“Whenever you make a new planetary system, these kinds of things should go on,” said Scott Sandford, a space science researcher at NASA Ames. “This potential to make organics and then dump them on the surfaces of any planet you make is probably a universal process.”

Although organic compounds are commonly found in meteorites and cometary samples, their origins presented a mystery. Now Ciesla and Sandford describe how the compounds possibly evolved in the March 29 edition of Science Express. How important a role these compounds may have played in giving rise to the origin of life remains poorly understood, however. 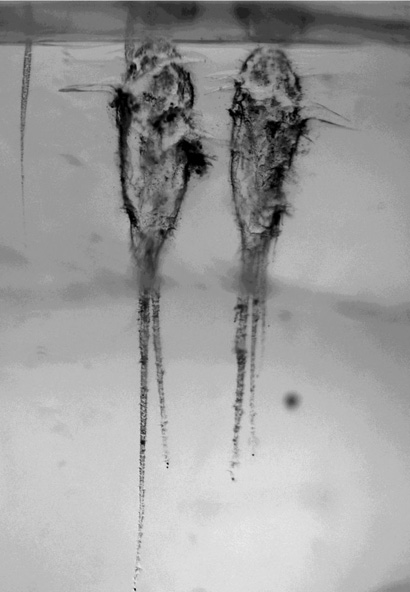 This image shows tracks caused by cometary particles collected in aerogel (“solid smoke”) and returned to Earth for study by the Stardust mission. Some of the impacted material can be seen at the ends of the tracks. These grains formed over 4.5 billion years ago when the solar system was forming from a disk of dust, gas and ice, which new computer simulations show would have been an ideal environment for the creation of organic compounds. Image courtesy of Scott Sandford/NASA Ames

Sandford has devoted many years of laboratory research to the chemical processes that occur when high-energy ultraviolet radiation bombards simple ices like those seen in space. “We’ve found that a surprisingly rich mixture of organics is made,” Sandford said.

These include molecules of biological interest, such as amino acids, nucleobases and amphiphiles, which make up the building blocks of proteins, RNA and DNA, and cellular membranes, respectively. Irradiated ices should have produced these same sorts of molecules during the formation of the solar system, he said.

But a question remained: Could icy grains traveling through the outer edges of the solar nebula, in temperatures as low as minus-405 degrees Fahrenheit (less than 30 Kelvin), become exposed to UV radiation from surrounding stars? 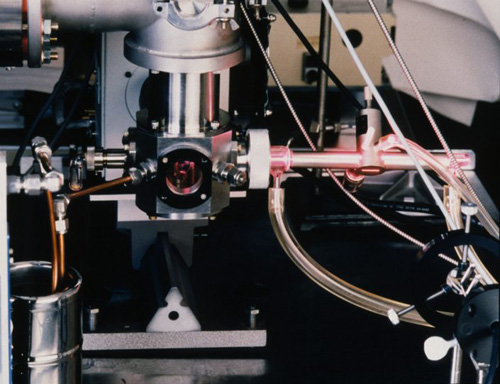 At NASA’s Ames Research Center, scientists simulate the environments found in space to study the kinds of chemical reactions that can happen there. The sample chamber shown here produces an environment of very low pressure (vacuum), low temperature (as low as 10 Kelvin/-441 degrees Fahrenheit) and high radiation. The cold sample shows through the window in the side of the chamber. The UV radiation is produced by a hydrogen lamp, which is the red glowing tube to the right of the chamber. Image courtesy of Scott Sandford/NASA Ames

Ciesla’s computer simulations reproduced the turbulent environment expected in the protoplanetary disk. This washing machine action mixed the particles throughout the nebula, and sometimes lofted them to high altitudes within the cloud, where they could become irradiated.

“Taking what we think we know about the dynamics of the outer solar nebula, it’s really hard for these ice particles not to spend at least part of their time where they’re going to be exposed to UV radiation,” Ciesla said. 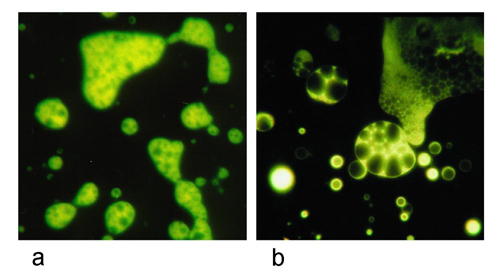 Primitive carbon-rich meteorites contain a class of organic compounds called amphiphiles which, when dissolved in water, spontaneously form membranes that can self-organize into hollow vesicles (right). Similar materials are produced when astrophysically relevant ices are irradiated with UV light and warmed and these too can form vesicles (left). Recent research suggests such molecules should have been abundantly produced in the disk of dust, gas and ice from which the solar system formed. Image courtesy of Scott Sandford/NASA Ames

The grains also moved in and out of warmer regions in the nebula. This completes the recipe for making organic compounds: ice, irradiation and warming.

“It was surprising how all these things just naturally fell out of the model,” Ciesla said. “It really did seem like this was a natural consequence of particle dynamics in the initial stage of planet formation.” 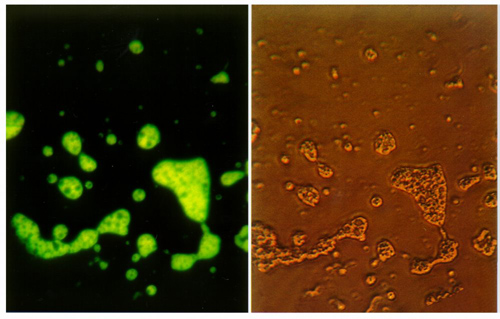 Laboratory simulations of the UV irradiation of astrophysical ices produce, among other things, a class of organic compounds called amphiphiles. When dissolved in water, amphiphiles spontaneously form membranes that can self-organize into hollow vesicles. Shown here are laboratory-produced vesicles illuminated under UV light (left) and visible light (right). New research suggests that such molecules should have been abundantly produced in the early solar system. Image courtesy of Scott Sandford/NASA Ames