In the most comprehensive study to date to examine the effects of soy on menopause, researchers have found that two daily servings of soy can reduce the frequency and severity of hot flashes by up to 26 percent, compared to a placebo.

The findings, published in Menopause: The Journal of the North American Menopause Association, reviewed 19 previous studies that examined more than 1,200 women.

Although the effectiveness of soy in alleviating hot flashes has been inconclusive, with some studies suggesting soy to be beneficial and others suggesting otherwise, much of the discrepancy is due to small sample sizes and inconsistent methodology, according to the authors.

“When you combine them all, we’ve found the overall effect is still positive,” said Melissa Melby, a medical anthropology professor at the University of Delaware and co-author of the study. 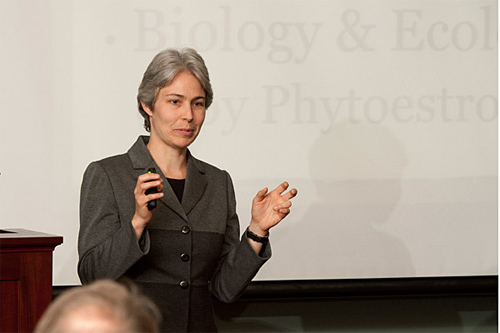 UD's Melissa Melby is co-author of a study that finds soy may offer an alternative to hormone therapy for hot flashes in menopause. Photo by Kathy F. Atkinson

Examining the impact of soy isoflavones, chemicals found in soy that exert a mild estrogen-like effect, Melby and her colleagues found:

Melby called the genistein result particularly notable because the compound is the primary isoflavone in soybeans and soy foods, suggesting that, “Eating soy foods, or using supplements derived from whole soybeans, may work better for women.”

The interest in soy and menopause stems from observational evidence in Japan, where researchers have found the low frequency of hot flashes in Japanese women might be attributed to the high soy consumption that often begins in utero and continues throughout their lifespan.

“Soy is probably more effective in these women,” Melby said. “But if you’re 50 and you’ve never touched soy, it’s not too late. We’ve found that it still helps.”