Of Avatars and Virtual Meetings

Craig Mundie, Microsoft’s chief research and strategy officer, brought news of Microsoft’s plans to merge the physical world with the digital word during an Oct. 6 lecture at the University of Toronto.

“The computer is being endowed with more and more human sensing-like capability,” said Mundie.  “We think this will be the predominant way people will use computers in the future.”

Imagine you are in a virtual meeting with a colleague on the other side of the globe. Your avatar is being generated in real time using a computer and Microsoft’s Kinect, a camera and microphone motion sensing input device that comes with the Xbox system.

The Kinect device works by tracking your body in your physical location and rendering a model of you in the virtual meeting space. Throughout the meeting your avatar speaks, moves and gestures as you do without requiring you to wear all sorts of sensors and gear.

Now, imagine adding capabilities such as translation or a programmable avatar that has access to a particular knowledge database, such as medicine, and this virtual environment can be used to create a waiting room or classroom in remote locations that have little or no access to healthcare or education. 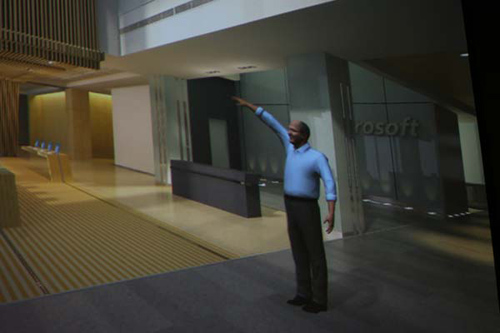 “All of this is not very far way,” said Mundie. “It’s a very exciting time to be working in the field.”

Mundie also shared information about a number of projects with audience, including modifications to Excel that will allow users to analyze and work with very large data sets. He gave demonstrations of the company’s work in 3D digital visualization, the Microsoft Phone 7 and Microsoft Tag.

Mundie chose the University of Toronto as one of the stops on his tour of campuses around the world.

“I really want to learn and understand what are the current issues and thoughts that exist on campuses around the world, listen to the young people and the faculty and administration of the schools,” Mundie told the capacity crowd at the Adel Sedra Lecture theatre at the Bahen Centre.

However, before launching into a discussion about the future of computing, Mundie took a few minutes to remember Steve Jobs, co-founder of Apple who had died the day before.

“I think when you look at what he achieved, it’s a real reminder of two different things. One is the influence a single individual can have,” said Mundie. “And, it’s just incredibly important to realize you can assemble technology in interesting ways that produce revolutionary effects.”