Scientists Project Changes in Rainfall Patterns for Next 30 Years

Scientists at the University of Hawaiʻi at Mānoa have projected an increased frequency of heavy rainfall events, but a decrease in rainfall intensity during the next 30 years (2011–2040) for the southern shoreline of Oʻahu, according to a recent study published in the Journal of Geophysical Research.

Chase Norton, a Meteorology Research Assistant at the School of Ocean and Earth Science and Technology (SOEST) at UH Mānoa, and colleagues (Professors Pao-Shin Chu and Thomas Schroeder) used a statistical model; rainfall data from rainfall gauges on Oahu, Hawaiʻi; and a suite of General Circulation Models (GCMs) from the Intergovernmental Panel on Climate Change (IPCC) to project future patterns of heavy rainfall events on Oʻahu. GCMs play a pivotal role in the understanding of climate change and associated local changes in weather. 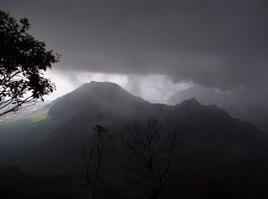 Heavy rainfall and flash floods are common in the Hawaiian Islands due to their steep terrain, rain–producing weather systems, and abundant moisture supply. They have caused multimillion dollars damage to homes, properties, roads, agriculture, and other sectors. Environmentally, heavy rainfall and runoff events in Hawaii, which are likely to cause slope and coastal erosion, pollutant discharges to the near shore marine environment, coral reef degradation, among others, are expected to change as Earth undergoes an unprecedented warming. Given the socioeconomic repercussions resulting from past storm events, it is of considerable interest to investigate changes in the frequency and intensity of heavy rainfall events in Hawaii, particularly for Oʻahu, as it is the most populous island in Hawaiʻi.

“The results presented in this study may benefit many agencies who are concerned with floods and relevant policy-making in the face of climate change,” said Chu, UH Mānoa Meteorology Professor, Hawaiʻi State Climate Office Director, and co-author of the study.  “For instance, changes in rainstorm intensity may be a serious consideration in aquifer management – as precipitation is the primary water source for streams and groundwater supply.”