Researchers at Yale University have developed a novel nanoparticle with promising applications in gene therapy, a type of medical treatment that addresses the root causes of diseases now typically treated for symptoms.

The advance could lead to new therapies for many forms of cancer, including brain tumors, as well as for cystic fibrosis and Huntington’s Disease. 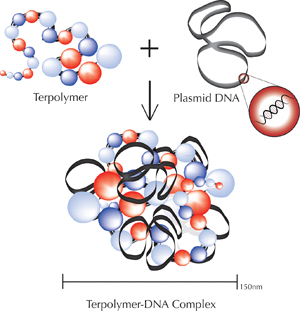 Yale researchers have developed a novel nanoparticle with promising applications in gene therapy. The advance could lead to new treatments for many forms of cancer, including brain tumors, as well as for cystic fibrosis and Huntington’s Disease. Image credit: Yale University

“The systems we developed could be used for any kind of gene therapy,” said W. Mark Saltzman, professor and chair of biomedical engineering at Yale and a principal investigator of a paper on these findings, published Dec. 4 online in the journal Nature Materials. “Using novel chemistry, we synthesized a new family of polymers and produced materials that are unlike any that have been used before.”

Saltzman and co-principal investigator Zhaozhong Jiang are both with Yale’s School of Engineering & Applied Science.

Safe and highly efficient, the new, non-viral particle acts like a virus by introducing a specific gene into diseased cells in order to kill or repair them.

The Yale team overcame the problem of excessive charge by making its nanoparticle more hydrophobic, or water-repellant, and thus less likely to form chemical bonds with water molecules. Specifically, the team incorporated safe, water-insoluble units into the polymer that generates the nanoparticles. This reduces the positive charge and increases stability. The result is an extremely safe mechanism for gene delivery that is more efficient than commercially available options.

“You can inject a lot of it into animals,” said Saltzman. “It produces efficient gene delivery, but doesn’t have any toxic effects.” 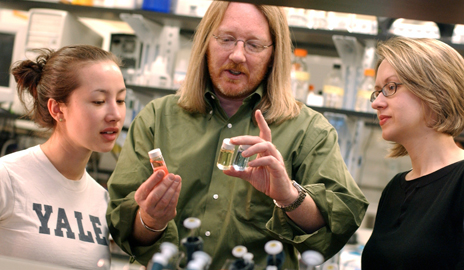 W. Mark Saltzman, center, is a principal investigator of a paper describing the development of the novel nanoparticle. Image credit: Yale University

The research team tested its nanoparticles both in vitro on cell culture and in vivo on a mouse tumor model.

Although the new materials can potentially be used for gene therapy in a wide variety of settings, Saltzman and his colleagues are particularly interested in using them in future research on treatments for brain tumors. Many experts believe that gene therapy is a promising approach for treating brain tumors, but prior research has been limited by the toxicity and low efficiency of the gene delivery materials.  This new work provides a potential solution to these prior problems.

Support for the research was provided by the National Institutes of Health, the Chicago Institute of Neurosurgery and Neuroresearch Foundation, the Voices Against Brain Cancer Foundation and the Yale Institute for Nanoscience and Quantum Engineering.