The Heart of The Plant

Palo Alto, CA — Food prices are soaring at the same time as the Earth’s population is nearing 9 billion. As a result the need for increased crop yields is extremely important. New research led by Carnegie’s Wolf Frommer into the system by which sugars are moved throughout a plant—from the leaves to the harvested portions and elsewhere—could be crucial for addressing this problem. Their work is published December 8 by Science Express.

Just as it’s necessary for the human body to move nutrients to all of the organs, it is vital for green plants to transport sugars to supply its various parts. In humans, this is the circulatory system’s job. But plants do not have a heart-like pump to move these vital energy sources. Instead, plants use a molecular pump. 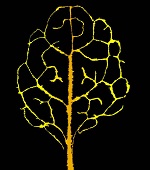 An image of the localization of the identified protein in the molecular pump in the vascalature of a plant leaf. Image credit: Carnegie Institution for Science

Twenty years ago, the Frommer team identified one of the key components of this molecular pump, which actively loads a sugar called sucrose into the plant’s veins, a tissue called phloem. But how the sucrose produced in the leaves via photosynthesis is delivered to the transporters that move it into the phloem has remained a mystery. Thus, a critical piece of the molecular pump was unknown–the protein that moves the sucrose to the inside of the plant’s leaf cell walls.

Frommer’s team included Carnegie’s Li-Qing Chen, the paper’s lead author, Xiao-Quing Qu, Bi-Huei Hou and Davide Sosso, as well as Sonia Osorio and Alisdair Fernie of the Max Planck Institute of Molecular Plant Physiology. In this new research they have identified the missing piece of the molecular pump system.

“Like engineers, we can now fine tune the pump components to address one of the major challenges for our future – namely, to increase the translocation of sugars towards seeds in order to increase crop yield,” Frommer said “The identification of these critical transporters is a major step towards developing strategies to ensure food supplies and keep food prices in check.”

What’s more, pests are abusing these transporters and using them to gain access to the plants sucrose pools. The identification of the role of these transporters in plant infections provides a new perspective on plant pathology and a totally new way of protecting pants from pathogens, further increasing crop yields and food security.

The identification of the function of this missing piece of the molecular pump involved in transporting sugar in plant makes it highly likely that the animal-cell version of this same protein fulfills a similar role in animals and humans. This would be a major breakthrough for diabetes and obesity research, since a yet unidentified transporter protein is responsible for essential steps in the movement of sugars from the intestine into the blood as well as for efflux from liver cells for maintenance of blood glucose levels.