Not Your Parents’ Chem Labs

As a college student, Michelle Driessen had an all-too-typical experience.

“I hated general chemistry,” she says. “I thought it was terribly boring.”

She had plenty of company. Experiments were all laid out in advance, and the goal seemed to be to get to a predetermined result without blowing up the glassware.

In the old days, “very few students appreciated the point of most general chemistry labs,” adds Driessen. “With cookbook chemistry, you couldn’t have anything go wrong or deviate [from what’s supposed to happen], but I find those things to be the most interesting part of science.” 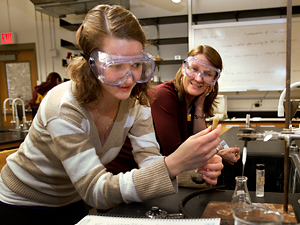 Today, Driessen is making sure University of Minnesota students learn a lot more from their freshman labs than just how to follow directions. An assistant professor, she holds a doctorate in chemistry and is director of general chemistry.

Since summer 2011, Driessen has led an overhaul of general chemistry lab experiments to let students figure out how to solve problems. Instead of simply answering questions, instructors may say, “Okay, you don’t know what that white compound is. Using the chemicals and equipment in this lab and what you know, how could you find out?”

An example from Driessen: “In the density lab, I’ll tell them, ‘Next week you get a small piece of plastic, and you have to figure out its density.’ We give them balances [scales] and solutions [fluids] with densities ranging from 0.8 to 1.2 grams per milliliter.” The lab also has graduated cylinders—cylindrical containers with the volume marked off at one-milliliter intervals.

Given these tools, could you measure the density of a pea-sized piece of plastic? See the end of this article for a solution.

Students have responded enthusiastically to the new approach.

“I prefer this to the more traditional cookbook methods because it’s more open-ended,” says student Josh Jansen. “I can derive my own conclusions instead of having to come to someone else’s.”

Students work in small teams, just as real scientists often do. They keep track of what they did, including false starts and wrong ideas they discarded, as they seek answers to problems.

“The students write up formal reports. They’re all different and hard to compare, but writing and synthesizing ideas helps them solidify concepts,” notes Driessen. “Certainly, this is a better stab at getting what science is about.”

Where organic was hardly green

Driessen persevered in chemistry because she found organic chemistry, which concerns the molecules of living things, much more fascinating than general (inorganic) chemistry. But organic chem has posed environmental problems, both in teaching labs and industry. Many organic molecules can’t engage in chemical reactions unless they are dissolved in solvents like benzene, carbon tetrachloride, or acetone.

But for the past 10 years, associate professor Jane Wissinger has been “greening” organic chemistry labs. 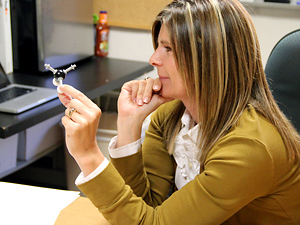 “The traditional way to make a lot of organic materials requires a lot of solvents or excess reagents [chemicals that undergo reactions],” says Wissinger, who is director of organic labs. “In green chemistry, we want to have as much of the reacting chemicals end up in the product as possible. Today, instead of using lots of reagents, we’re using catalysts.”

Catalysts make reactions go much faster, but they don’t get used up and so can often be reused.

“For example, organic chemistry students prepare a compound called a chalcone—a natural product being investigated as an anti-inflammatory—by grinding together two chemicals without the use of any solvent at all,” says Wissinger. “Then the chalcone is treated with the metal palladium as a catalyst and with hydrogen gas to discover what mystery product is formed.”

Students also produce camphor from its parent compound—called borneol—using good old table salt as a catalyst instead of the hazardous sodium bromide. And they use an ingeniously designed test tube to extract oil from cloves with liquid carbon dioxide instead of traditional solvents.

“I think it’s really cool that we’re learning about green chemistry in comparison to traditional methods,” says student Lindsay Nevalainen. “I think it offers a modern perspective on chemistry.”

And how’s this for modern: Wissinger is using a grant from the Minnesota Pollution Control Agency to collaborate with Marc Hillmyer, director of the U’s Center for Sustainable Polymers, to design an experiment where students can make plastics from renewable resources.

Many of the teaching assistants for organic labs take the green principles with them as they find jobs. For example, James Wollack, a former organic lab TA for Wissinger who earned a Ph.D. from the U, is now incorporating green chemistry into labs at the University of St. Catherine in St. Paul.

But for chemists, it isn’t easy being green. This is an important point, especially for students seeking careers in other fields.

“In my labs, only 20 percent of the students are chemistry or chemical engineering students,” says Wissinger. “It’s important to have everybody aware of the challenges the chemical industry faces. Chemists have to do this for sustainability and for our future.”