Scientists from the U.S. Department of Energy’s Lawrence Berkeley National Laboratory (Berkeley Lab) have identified tissue mechanisms that may influence a woman’s susceptibility or resistance to breast cancer after exposure to low-dose ionizing radiation, such as the levels used in full-body CT scans and radiotherapy.

The research could lead to new ways to identify women who have higher or lower risks of breast cancer from low-dose radiation. Such a predictive tool could help guide the treatment of cancer patients who may be better served by non-radiation therapies.

The findings also support the idea that a person’s genes play a big role in determining her risk of breast cancer from low-dose radiation. The current model for predicting cancer risk from ionizing radiation holds that risk is directly proportional to dose. But there’s a growing understanding that this linear relationship doesn’t apply at lower doses. Instead, the health effects of low-dose radiation may vary substantially among people depending on their genetic makeup.

The scientists, led by Andy Wyrobek of Berkeley Lab’s Life Sciences Division, report their research October 15 in the journal PLOS ONE. 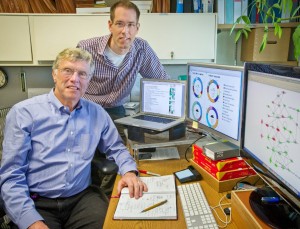 Andy Wyrobek (left) and Antoine Snijders are among a team of Berkeley Lab scientists that is exploring the connection between genetic differences, tissue mechanisms, and women's susceptibility to breast cancer after exposure to low-dose radiation. Image credit: Berkeley Lab

They studied mammary tissue from two strains of mice—one that is susceptible to radiation-induced mammary gland cancer and one that is resistant—before and after the mice were exposed to low-dose radiation.

The team then looked for differences between the two strains in how their genes turn on and off. They used a method that scans thousands of genes simultaneously. They found differences in genes that regulate tissue stress response, DNA repair, immune response, cellular proliferation, and other cellular and tissue mechanisms.

They also found that these differences carried over to breast cancer survivability in women. Breast cancer patients with gene expression profiles like the cancer-resistant mice (before radiation exposure) were more likely to survive eight years after diagnosis. Women with gene expression profiles like the cancer-sensitive mice were less likely to survive after eight years.

Based on this, the scientists believe the cellular and tissue mechanisms that control mice’s risk of mammary gland cancer from low-dose radiation are similar to the mechanisms that affect a woman’s chance of surviving breast cancer.

“Our studies of genetic differences in radiation sensitivity in mice, and individual variation in breast cancer survival in women, suggest that there are women who, because of their genes, have a higher risk of breast cancer when they’re exposed to low-dose radiation,” says Andy Wyrobek, who conducted the research with Antoine Snijders, Joe Gray, and several other Berkeley Lab scientists.

“This raises the possibility that we can use gene expression profiles to develop simple tests that screen for women who may be sensitive to low-dose radiation versus women who are resistant,” Snijders says.

Differences in how mice respond to low-dose radiation one month after exposure are revealed in these gene-interaction networks. The left network, from mice that are sensitive to radiation-induced cancer, shows that many genes that control cell division are up-regulated (as marked in red). The right network, from cancer-resistant mice, shows that many genes are down-regulated (as marked in green). Image credit: Berkeley Lab

The scientists first studied mice before radiation exposure. They found more than 130 genes that express differently in blood and mammary tissue samples of cancer-resistant mice compared to cancer-sensitive mice.

To determine if these differences also apply to people, the scientists mined human breast cancer “knowledge bases” that link the expression of patients’ tumor genes with their survival outcomes. They studied newly diagnosed women before they received radiation or chemical therapies. Women with gene expression levels like those of radiation-sensitive mice were less likely to survive after eight years. In contrast, women with expression levels like those of the resistant strain were more likely to survive the eight-year duration of the follow-up.

Next, gene expression analyses conducted a few hours after the end of low-dose exposure found changes in many genes in the mammary tissue of cancer-sensitive mice. Large numbers of genes that regulate their immune system were suppressed, while genes that regulate pubertal mammary gland development were turned on in error. In cancer-resistant mice, these genes showed only a small change in activity.

Analyses conducted one month after exposure yielded striking differences in the expression of a large set of genes that control cell proliferation. The cancer-sensitive mice had up-regulated many genes associated with cell division and cell renewal. The cancer-resistant mice had down-regulated these same genes below normal levels, which suggests they were able to activate tissue mechanisms that prevent cellular proliferation that can lead to cancer.

These differences again carried over to people. Breast cancer patients whose cell division and renewal genes were up-regulated like the cancer-sensitive mice didn’t survive as long as patients in which the same genes were suppressed.

“This research opens promising opportunities for developing blood tests that predict a woman’s risk for breast cancer, and which identify women who are susceptible to the cancer effects of low-dose radiation exposures,” says Wyrobek.

This research was supported by Berkeley Lab’s Laboratory Directed Research and Development fund and the Department of Energy’s Office of Science.