Mystery of the mutant polyomavirus

A new study shows that common mutant forms of the deadly JC polyomavirus are not responsible for the pathogen’s main attack, which causes a brain-damaging disease in immunocompromised patients called progressive multifocal leukoencephalopathy. But that finding raises the ominous question of what the mutants might be up to instead.

PROVIDENCE, R.I. [Brown University] — The JC polyomavirus is clearly opportunistic. It infects half the population but lethally destroys brain tissue only in immunocompromised patients — and it may be outright sneaky, too. Even as a new research paper allays fears that common mutant forms of the virus are the ones directly responsible for the disease’s main attack, that same finding raises new questions about what the mutants are doing instead.

Even if they are not the ones killing key brain cells, the mutants are up to some kind of no good, scientists suspect, because they are only found in the people who become sick with progressive multifocal leukoencephalopathy. PML sickens and usually kills one in 25 people with HIV-1 or one in 500 who receive a certain treatment for multiple sclerosis. The mutants appear plentiful in the blood and cerebral spinal fluid of sick patients, but in healthy carriers, the virus never mutates or spreads to the brain.

“The thinking in the field has been that these mutants possibly represent the pathogenic form of the virus,” said Walter Atwood, a Brown University biologist and co-corresponding author on the new paper published in the journal mBio. “But there is no evidence that these things interact with the known receptors that are required for infection. This is the first report to show that, in fact, they are not infectious. But they may contribute to disease in ways we don’t yet understand.” 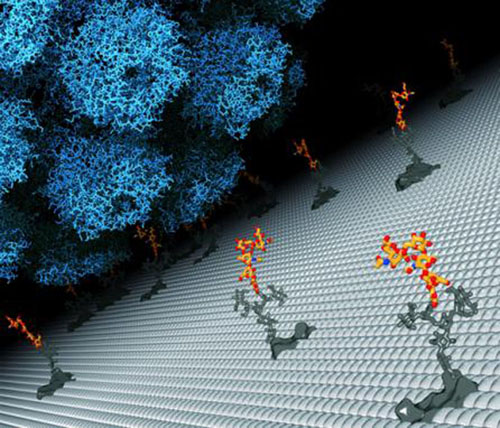 Mysterious mutants. Even if they are not the ones killing key brain cells, mutant JC polyomaviruses are up to some kind of no good. They are only found in the brains of people who become sick with progressive multifocal leukoencephalopathy. Image credit: Ursula Neu/Tübingen University

The mutant forms of the virus, the paper’s authors from Brown University and University of Tübingen hypothesize, might provide a grand diversion to help the main virus evade the immune system, or they could be attacking different cells than the main virus does in an as yet undiscovered way.

In the study, Atwood’s team, led by co-first authors Melissa Maginnis of Brown and Luisa Ströh of Tübingen, looked at common mutant strains both in a series of lab experiments and through direct structural investigations using x-ray crystallography. What they determined is that the mutants are unable to bind at the virus’s preferred site, a carbohydrate called LSTc, on the surface of both astrocytes and oligodendrocytes. Those two types of brain glial cells are the known targets of the virus. They produce myelin, a necessary sheathing for neurons, the message centers of the brain.

In the lab at Brown the researchers showed that the mutants are ostensibly harmless by infecting some glial cells with DNA from the virus’s normal form and some with DNA from several common mutants and culturing them all for 22 days. Only the normal, or “wild-type,” virus grew or spread at all.

Meanwhile the Tübingen scientists also resolved the crystal structures of three different mutant viruses and saw that even though the mutants overall had the same structure as the main virus, the sites at which they bind to LSTc all had local structural differences that either made binding impossible or much more difficult.

“It is a physical blocking,” said Ströh, who is now visiting Brown from Tübingen as part of an exchange program. “Introducing one change can physically block, or at least partially block, interaction with LSTc, but the protein itself is still folded correctly.”

To further rule out the chance that the mutant viruses could bind to and infect glial cells, the lab team then inserted normal and mutant polyomavirus proteins into pseudoviruses that could infect cells in culture even if they carried the mutations. Then they exposed several human brain cell types to the mutant and normal pseudoviruses. Only the pseudoviruses with normal DNA managed to infect the cells. The mutants still could not.

If they’re not infectious, what are they up to? Walter Atwood, Luisa Ströh, and Melissa Maginnis showed that mutant JC polyomaviruses aren’t conventionally infectious. “But they may contribute to disease in ways we don’t yet understand.” Image credit: Brown University

So what other role might the mutants play in attacking the brain? The study’s authors offer two main possibilities, although there are others as well. (The researchers acknowledge that their experiments with glial cells in the lab are not exactly the same as tracking actual infection — or non-infection — in the brain).

Atwood’s preferred hypothesis is that the mutants help the main form of the virus evade the patient’s ailing immune system.

“It’s not uncommon for viruses to accumulate mutations in their outer surfaces that alter antibody recognition,” Atwood said. “These altered surfaces are attacked by the immune system. So the virus is spitting out a bunch of mutant viruses to serve as a smokescreen to the immune system as if to say, ‘Attack all this garbage, but I can still go on to infect the next cell.’”

Another hypothesis, favored by Maginnis and Ströh, is that the mutants infect a different kind of cell in a way that does not require binding to LSTc.

“Perhaps they are infectious in endothelial cells,” Maginnis said. “The lack of binding to LSTc might allow it to spread more freely. For example, the mutant viruses might be able to spread cell to cell in a mechanism that doesn’t involve binding to receptors on the surface of cells, and perhaps this is how the virus crosses the blood-brain barrier.”

Whether they are distracting and evading the immune system, slipping into other cells and sneaking through the blood-brain barrier, or something else, the mutants remain a serious concern to scientists, physicians, and patients, because JC polyomavirus remains a killer on the loose.

In addition to Maginnis, Ströh, and Atwood, other authors are Gretchen Gee, Bethany O’Hara, and Aaron Derdowski of Brown, and Thilo Stehle of Tübingen and Vanderbilt University.

The National Institute of Neurological Disorders and Stroke funded the research with grants 5P01NS065719 and F32NS064870.