*Discovery could lead to treatments for muscular dystrophy and ALS*

COLUMBIA, Mo. – Researchers at the University of Missouri have identified a communication breakdown between nerves and muscles in mice that may provide new insight into the debilitating and fatal human disease known as spinal muscular atrophy (SMA).

“Critical communication occurs at the point where nerves and muscles ‘talk’ to each other. When this communication between nerves and muscles is disrupted, muscles do not work properly,” said Michael Garcia, associate professor of biological sciences in the College of Arts and Science and the Christopher S. Bond Life Sciences Center.  “In this study, we found that delivery of ‘the words’ a nerve uses to communicate with muscles was disrupted before they arrived at the nerve ending.”

This would be similar to the idea of someone opening their mouth to talk, but nothing comes out. The words are not there to come out, so no communication is transmitted to the other person. 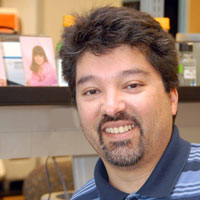 SMA is caused by a protein deficiency present in all cells, including motor neurons.  According to Garcia, this discovery also may shed light on other diseases involving motor neurons, including amyotrophic lateral sclerosis (ALS, or Lou Gehrig’s disease), and dysfunctions of the synapses, such as Duchenne Muscular Dystrophy.

SMA is characterized by progressive weakness and degeneration of skeletal muscles.  While a person’s intellect is unaffected, this progressive disease slowly robs the body of its ability to walk, stand, sit, and eventually move at all. Currently, no cure or effective treatment exists for SMA.

Results from this study are reported in the September 2011 issue of ACTA Neuropathology in a paper titled, “The spinal muscular atrophy mouse model, SMAD7, displays altered axonal transport without global neurofilament alterations.”