When You Really, Really Have to go: Study Wins Ig Nobel Prize

Past winners have included scientists who found that asthma symptoms can be treated with a roller coaster ride and veterinarians who reported cows with names give more milk than those without.

On Sept. 29 at Harvard University, Robert H. Pietrzak, assistant professor of psychiatry at the Yale University School of Medicine, joined this elite company as a co-winner of one of ten 2011 Ig Nobel Prizes honoring “science that makes people laugh and then makes them think.”

The scientific humor magazine Annals of Improbable Research recognized Pietrzak and his co-winners from Brown University, the University of Melbourne, and the firm CogState Ltd for their report last year that the extreme need to urinate creates cognitive difficulties equivalent to being fatigued or mildly impaired by alcohol. 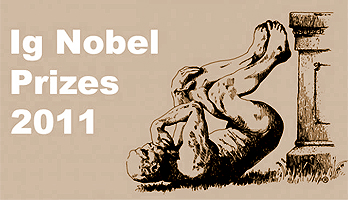 “Giving people lots of water and making them take tests while squirming in discomfort may seem a bit quirky, but the research helps us evaluate the methods used to measure cognitive change,” Pietrzak said

These methods are currently being applied to assess cognition in various neurologic and psychiatric illnesses, as well as to evaluate the cognitive effects of medications in clinical trials, he added

The parody of the Nobel Prize awards has become a popular entertainment event with actual Nobel laureates handing out the prizes.  If speakers drone on too long, a girl named Miss Sweety Poo yells: “Please stop, I’m bored.”

Other winners of the 21st Annual prize awards are listed at https://improbable.com/ig/.

Pietrzak and his colleagues’ article “The Effect of Acute Increase in Urge to Void on Cognitive Function in Healthy Adults” was published in 2010 in the journal Neurourology and Urodynamics and funded by CogState Ltd, a company with offices in Australia and New Haven, which is a global provider of cognitive testing products and services.

The study involved healthy adults who took part in an experiment in which they consumed 250 milliliters of water every 15 minutes. The researchers then administered standardized measures of cognitive function at hourly intervals. They found that having an extreme urge to void significantly impaired attention and working memory functions. The magnitude of this cognitive impairment was equivalent to that observed in healthy adults with a 0.05% blood alcohol concentration or those who are fatigued following 24 hours of sustained wakefulness.

The researchers noted “these cognitive functions returned to normal almost immediately after voiding.”