The Internet of Tomorrow: Faster, Better and Cheaper

*The UA, USC and other institutions are building the future of communications using light.*

With the rising demand for Internet access outstripping the existing Internet capacity, scientists are turning to optoelectronic technology – transmitting data using light. The technology is well-established but is still being developed in order to handle the increasing data loads that users require. 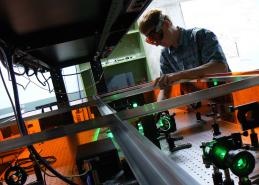 In 2008, the National Science Foundation gave a five-year, $18.5 million grant to establish an engineering research center that is based at the UA and unites it with USC and the other universities in a collaboration known as the Center for Integrated Access Networks, or CIAN.

CIAN’s goal is to solve the data crisis by bringing optoelectronic technology to its full potential.

“CIAN is aimed at transforming the Internet to a high-speed network that uses less energy, is more reliable so that it reconfigures itself around network impairments, is scalable to make it suitable for a growing number of end users, and is not too costly,” said Nasser Peyghambarian, chair of photonics and aasers in the College of Optical Sciences at the UA.

“The UA and USC and seven other university partners are working together on improving the reliability of the network as well as the network speed and cost,” he said. 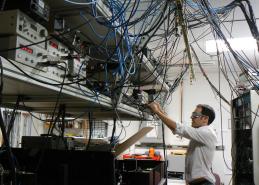 The Internet of the future will use light instead of electrical signals to transmit large amounts of data fast and reliably. (Photo: UA College of Optical Sciences)

“I can send 10 gigabits per second across the backbone of the national network,” Willner said. “The problem is, how do you get 10 gigabits to every home, every access point?”

Now in its fourth year, the nine-university collaboration has made important breakthroughs in transforming the way large amounts of data are transmitted. 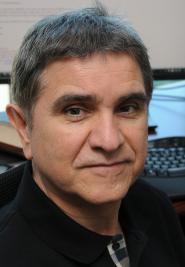 In a paper published earlier this year in Optics Communications, a team of researchers including Willner and lead author Hacene Mahieddine Chaouch, a graduate research assistant at the UA, developed three new methods of restoring degraded optical signals – a key hurdle to overcome when transmitting big chunks of data.

Willner said he hopes that one day, computer terminals will come equipped with chips that use these methods to clean up damaged data.

Said Peyghambarian: “The Internet continues to transform people’s lives, and collaborative projects like CIAN, allowed by NSF and industrial support, allows multiple schools around the world working together to push the boundaries of human knowledge.”