EAST LANSING, Mich. — Bacteria in hyenas’ scent glands may be the key controllers of communication.

The results, featured in the current issue of Scientific Reports, show a clear relationship between the diversity of hyena clans and the distinct microbial communities that reside in their scent glands, said Kevin Theis, the paper’s lead author and Michigan State University postdoctoral researcher.

“A critical component of every animal’s behavioral repertoire is an effective communication system,” said Theis, who co-authored the study with Kay Holekamp, MSU zoologist. “It is possible that without their bacteria, many animals couldn’t ‘say’ much at all.”

This is the first time that scientists have shown that different social groups of mammals possess different odor-producing bacterial communities. These communities produce unique chemical signatures, and the hyenas can distinguish among them by using their noses. 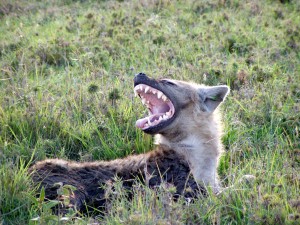 Past research has demonstrated important roles played by microbes in digestion and other bodily functions. It’s also widely known that most mammals use scent to signal a wide range of traits, including sex, age, reproductive status and group membership. This study details bacteria living in a mutually beneficial relationship with their hyena hosts. It also highlights the contribution of new DNA sequencing technologies showcasing the role good, symbiotic bacteria play in animal behavior.

On the grassy Kenyan plains, Theis gathered information about the bacterial types present in samples of paste, a sour-smelling secretion that hyenas deposit on grass stalks. Field samples were collected from hyenas’ scent pouches and analyzed using next-generation sequence technology back at MSU labs. The samples revealed a high degree of similarities, microbial speaking, between deposits left by members of the same clans. They also varied distinctly from paste left by hyenas from other clans.

“One benefit of sharing a common microbial community in their scent pouches would be in terms of job sharing when hyenas scent mark their territory,” Theis said. “Multiple members of the clan could more efficiently carry out the job and mark more territory.”

Furthermore, group-specific social odors could facilitate the recognition of social partners, thereby reducing rates of squabbles within clans, he added.

Future studies will dig deeper into the relationship between bacteria and host as well as understanding the scope of information being conveyed by the bacteria.

“The complex social lives of these animals may ultimately be reliant upon their unheralded symbiotic microbial communities,” Theis said. 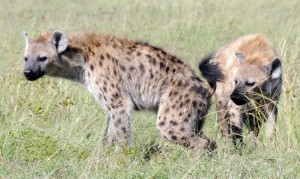 Theis gathered information about the bacterial types present in samples of paste, a sour-smelling secretion that hyenas deposit on grass stalks. Photo courtesy of MSU.

This research was funded in part by the National Science Foundation.