Delaware Geological Survey (DGS) scientists have uncovered hard proof of faults in northern Delaware, indicating the occurrence of earthquakes millions of years ago.

The geologic evidence turned up in sediment samples removed during a well-drilling project this summer from depths ranging 137 to 251 feet down in Smyrna and the Woodland Beach Wildlife Area.

“People have postulated that there are faults in this area,” DGS Senior Scientist Scott Andres said. “Now we have evidence of it.”

Geologists previously suspected the presence of faults due to variations in sediment layers that abruptly thicken between adjacent areas. The cause for these changes in depth and thickness, first noticed in the 1960s, has been the subject of speculation in many previous reports.

The new samples reveal markings directly caused by faulting, or the breakage and movement of rocks or sediments in response to stresses in the earth.

“When faulting occurs and people feel it, we call it an earthquake,” Andres said. 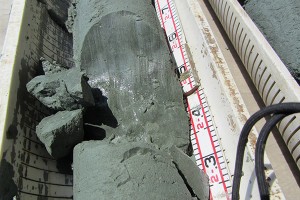 The fault surfaces are shiny, waxy mud, with flat to slightly wavy impressions, parallel grooves and step-like features. Together, the grooves and steps are known as “slickensides.”

The slickensides indicate that the material below the fault moved downward relative to the material above. There are no markers showing how far the sediments have moved, Andres said, which might have given insights into the magnitude of the earthquakes.

One fault zone occurs within muddy sediments of the Miocene-age Calvert Formation, just above a contact with the Eocene-age Piney Point Formation. Because evidence for faulting cannot be imprinted onto material until after deposition, the geologic record show the faulting occurred since deposition in the Miocene more than 15 million years ago.

The recent findings have alerted geologists to be on the lookout for similar features related to faulting and the release of pressure. The main focus of the coring project was to better understand the distribution of groundwater in southern New Castle and northern Kent counties for future utility planning.

“It was a surprise,” Andres said about finding the faults. “I had never seen it before and never expected to see anything like this.”

The sample sets were collected as part of the ongoing Delaware Groundwater Monitoring Network project, funded by a capital appropriation from the state of Delaware and conducted on behalf of the Governor’s Water Supply Coordinating Council. The project is a cooperative effort of the council, the Delaware Department of Natural Resources and Environmental Control and the Water Resources Center. Additional information can be found at this DGS website.

About the Delaware Geological Survey

DGS is a science-based, public service-driven state agency at the University of Delaware that conducts geologic and hydrologic research, service and exploration for the benefit of the citizens in the state. It is affiliated with the College of Earth, Ocean, and Environment.