EAST LANSING, Mich. — In a narrow, modest laboratory in Michigan State University’s Giltner Hall, students pore over African skeletons from the Middle Ages in an effort to make the bones speak.

Little is known about these Nubians, meaning the information collected by graduate and undergraduate students in MSU’s Forensic Anthropology and Bioarchaeology Program will help shed light on this unexplored culture.

“This is generally an unknown group of people, so what we get to do with the skeletal collection is really make the bones speak,” said Carolyn Hurst, a doctoral student in physical anthropology who is leading the lab this academic year.

The 409 skeletons – dating from the sixth to 15th centuries – were rescued several years ago from gravesites on Mis Island, located along the Nile River in present day Sudan, before the region became a dam. The collection is on loan to MSU from the prestigious British Museum. 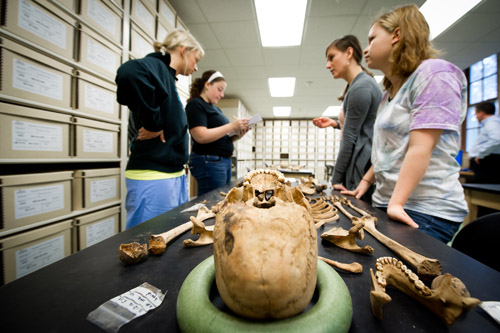 Students analyze a Nubian skeleton from the Middle Ages. More than 400 ancient skeletons from Africa are on loan to MSU from the British Museum. Photo by G.L. Kohuth

Four MSU graduate students helped in the excavation. Now, another group of students – both graduate-level and undergraduates – are analyzing the bones for clues into the ancient Nubians’ diets, health histories and lifestyles. (To read more about their ongoing discoveries, click here.)

Having direct access to a large, well-preserved set of ancient remains is rare for college students. The research experience provides a major advantage for MSU students looking to become professional anthropologists or forensic scientists. 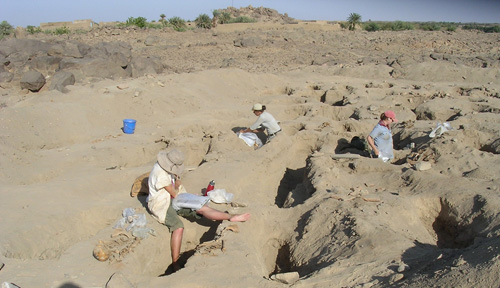 MSU students, from left, Lindsey Jenny, Tracey Tichnell and Cate Bird excavate graves in Sudan in 2007 to save the remains from a large dam that now covers the area. Contributed photo by Richard Watts

“There aren’t a lot of programs from across the world that have a collection like this,” said Todd Fenton, associate professor in the MSU Department of Anthropology and director of the Nubian bones project. “It gives our graduate students an amazing research platform and also provides exciting opportunities for our undergraduate students.”

For years, Fenton and his students have worked with personnel from the British Museum on excavations in Albania. In the mid-2000s, when the massive Merowe Dam was being built in an area known as the Fourth Cataract of the Nile River, Derek Welsby from the museum turned to Fenton for help in excavating the medieval Nubian remains.

Four MSU graduate students – Cate Bird, Lindsey Jenny, Tracey Tichnell and Andrea Clowes – traveled to Sudan to assist with the three-month excavation in early 2007. The work was undertaken by the Sudan Archaeological Research Society in collaboration with the British Museum. 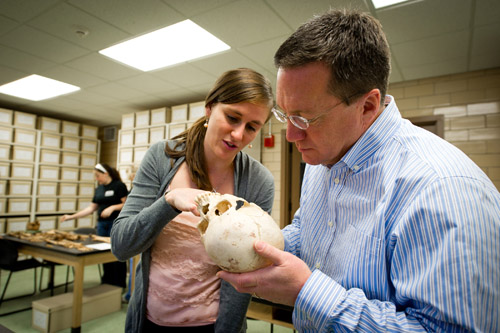 Under the brutal African sun, the MSU students, with help from museum fieldworkers and Sudanese citizens, carefully removed the skeletons from their burial sites, conducted a preliminary analysis of the bones, then boxed them up and shipped them to the British Museum in London.

“I jumped at the opportunity to go to Sudan and see a region of the world that’s not very accessible,” said Bird, a doctoral student in anthropology. “We usually just see bones in the laboratory. To be able to have such a hand in excavating them and making sure they were handled properly and cared for was important to me.”

The skeletons remained at the museum until May 2010, when they came to MSU through a five-year loan, which can be renewed. 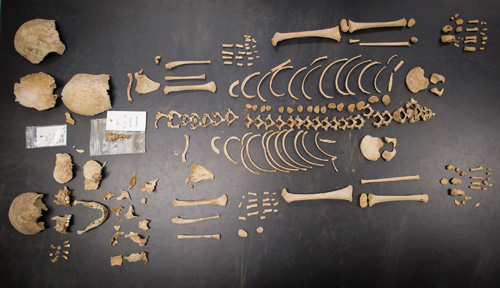 A Nubian skeleton laid out on a table at Giltner Hall. Photo by G.L. Kohuth

After cleaning and cataloguing the skeletons, a group of students spent the first academic year studying the adult skeletons. That project – led by Angela Soler, who recently earned her doctorate in anthropology – included analyzing the bones and teeth to determine dietary habits, sex, approximate age and evidence of illness or trauma.

The information collected is entered into a database run by the British Museum, which is analyzing another set of remains from Mis Island.

“We were extremely pleased to team up with MSU because of the unbridled enthusiasm of both Dr. Fenton and his students,” said Welsby, assistant keeper in the British Museum’s Department of Ancient Egypt and Sudan. “This is an ideal scenario in that we get the basic skeletal report to integrate into our final report on all aspects of the work at the Fourth Cataract while the students get the raw material to study.” 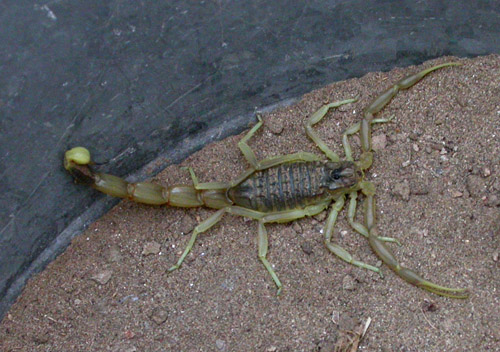 The students frequently encountered the deadly yellow scorpion (including this one, captured in a bucket). The scorpions often hid under freshly excavated remains, so the students learned to carefully lift bones so as not to be stung by rogue tails. Image credit: Michigan State University

Margaret Zywicki, a senior anthropology major from metro Detroit, worked in the Giltner Hall lab from the beginning – “when the bones were in boxes covered with dirt” – and is now applying to graduate schools.

“I had no experience with bones before, so by working here I’ve gotten extensive experience that most undergraduates don’t get,” Zywicki said. “And now that I’m applying to graduate schools I have that experience on my resume and that’s something that should really catch their attention.”

This year, the students, led by Hurst, are studying the child and adolescent skeletons. 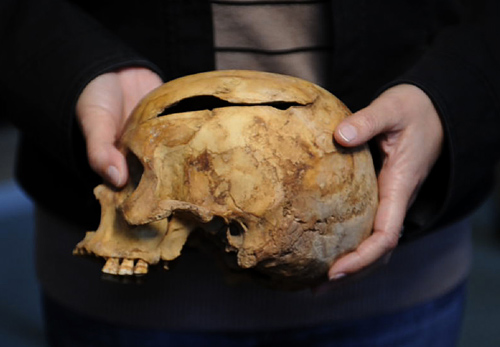 Angela Soler holds a Nubian skull that was cut open, possibly by a sword. Soler, who recently earned her Ph.D. in anthropology from MSU, led the bones lab in 2010-11 and wrote her dissertation on the adult skeletons. Photo by G.L. Kohuth

Kailey Shelton, a junior from Maryland, is enjoying the project so much she decided to pursue a bachelor’s degree in anthropology to go along with her history major.

“It’s so neat to see the physical remains of something that’s a thousand years old,” Shelton said. “It’s the idea that something from so long ago is right here in front of me, and I’m able to tell something about that person from it.

“As clichéd as it is, it’s where history comes alive, and that’s always been the thing that excites me the most.”