AUSTIN, Texas — Intersections of the future will not need stop lights or stop signs, but will look like a somewhat chaotic flow of driverless, autonomous cars slipping past one another as they are managed by a virtual traffic controller, says computer scientist Peter Stone.

“A future where sitting in the backseat of the car reading our newspaper while it drives us effortlessly through city streets and intersections is not that far away,” says Stone, a professor of computer science at The University of Texas at Austin. 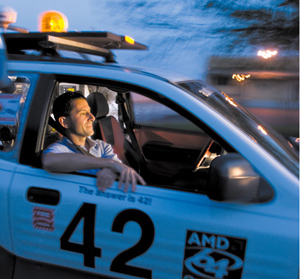 Peter Stone rides in Marvin, the autonomous car designed by he and his students. Photo by Wyatt McSpadden

Stone’s research focuses on creating artificially intelligent (AI) computing systems, and he is developing some of the systems that are needed to make autonomous driving a reality. For example, Stone and his students created an autonomous car, named Marvin, in cooperation with Austin Robot Technology that competed in the 2007 DARPA Urban Challenge competition.

Stone presented his research Saturday on autonomous intersection management at the American Association for the Advancement of Science (AAAS) annual meeting in Vancouver, British Columbia.

“Computers can already fly a passenger jet much like a trained human pilot, but people still face the dangerous task of driving automobiles,” he says. “Vehicles are being developed that will be able to handle most of the driving tasks themselves. But once autonomous vehicles become popular, we need to coordinate those vehicles on the streets.”

To that end, Stone is developing virtual intersection systems that will make auto travel safer and faster.

In his newest system, AI driver agents (the autonomous vehicles) “call ahead” and reserve space and a time at an intersection. Then an arbiter agent, called an “intersection manager,” approves the request, and the vehicles move through. There is little stopped traffic.

For now, the action takes place mainly as a simulation on a computer, or with a single real car (for example, Marvin) interacting with many other simulated cars. But Stone says the day is near when we’ll start seeing autonomous vehicles on the streets, and the benefits of controlling the cars – and traffic – will be realized.