Yale scientists have discovered the molecular pathway by which maternally inherited deafness appears to occur: Mitochondrial DNA mutations trigger a signaling cascade, resulting in programmed cell death. The study is in the Feb. 17 issue of Cell.

Mitochondria are cellular structures that function as “cellular power plants” because they generate most of the cell’s supply of energy. They contain DNA inherited from one’s mother. Mitochondria determine whether a cell lives or dies via the process of programmed cell death, or apoptosis. 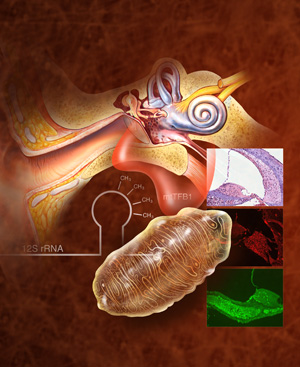 The Yale scientists focused on a specific mitochondrial DNA mutation that causes maternally inherited deafness. The mutation occurs in a gene that codes for RNA in mitochondrial ribosomes, which generate proteins required for cellular respiration. The team found that cell lines containing this mutation are prone to cell death not directly due to the mutation, but rather because it enhanced a normal chemical modification of the RNA called methylation, which regulates ribosome assembly.

“Our lab had previously discovered that overexpression of the enzyme responsible for this methylation could cause cell death, even in cells without the deafness mutation,” said corresponding author Gerald S. Shadel, professor of pathology and genetics at Yale School of Medicine. “But when the researchers overexpressed the enzyme in mice to mimic the effects of the mutation,” he said, “we were astonished to discover that the animals progressively lost their hearing, reflecting how such disease would develop due to a known pathogenic human mitochondrial DNA mutation. This new mouse model will be instrumental in understanding genetic and environmental factors known to impact mitochondrial disease pathology.

The researchers found that reactive oxygen molecules produced by diseased mitochondria are what trigger events leading to a cell death-inducing gene expression program. By genetically depleting the protein ultimately responsible for activating this programmed cell death response, they were able to restore normal hearing to the mice.

The study not only sheds light on inherited deafness in humans, but possibly also age-related hearing loss and other human diseases. First author Nuno Raimundo, a postdoctoral associate in pathology, said, “Mitochondrial diseases are complicated because different tissues are affected in often unpredictable ways. Defining the molecular mechanism underlying death of only a specific subset of cells in the inner ear is a major step toward unraveling this complexity.”

This study was supported by grants from the National Institutes of Health.