Higher education, a jewel of American society and an engine of its economy, is under threat, and if the nation is to remain competitive the financial model must be overhauled, says a new book.

Authors of Financing American Higher Education in the Era of Globalization say reforming the model will take a long-term, top-level coalition composed of the president, the nation’s governors, college and K-12 leaders, and leaders in the business community. 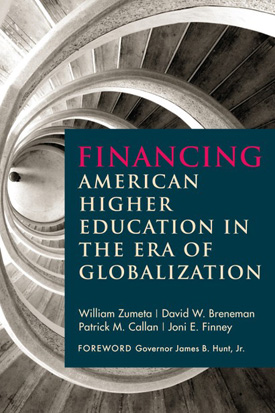 “The U.S. system is failing because the financing model doesn’t work anymore, and if nothing is done, the country will fall irretrievably behind in the education that drives new ideas, new technology and thus the economy in an increasingly competitive global context,” said William Zumeta, a professor of public policy and higher education at the University of Washington’s Evans School of Public Affairs. He’s lead author of the book, published Feb. 21 by Harvard Education Press.

Zumeta and his colleagues say financial models must encourage access to higher education and graduation because that is the only way to get more highly trained workers.

To begin, the authors say, needy students, many of whom belong to fast-growing ethnic groups underrepresented in colleges, must be convinced that college is a realistic goal. Zumeta said early commitment programs like Washington’s College Bound scholarship make sense.

He and his co-authors say the country should devote more policy attention to the types of institutions that educate most undergraduate students. For example, as part of his 2013 budget, President Obama proposed an $8 billion Community College Career Fund with a goal of 2 million workers trained for jobs in high-demand industries.

“This is the sort of attention to broad-access institutions that we need,” Zumeta said.

But that’s only part of the equation. In aggregate, inflation-adjusted terms, state support of higher education is substantially lower per student than in the 1980s. Students and their families are being forced to pay more of the costs. 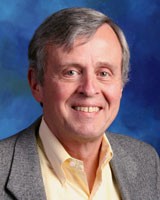 Zumeta and his colleagues say student aid policies must be redesigned so they stop encouraging states to let tuition spiral upward as state support falls, pricing many families out of the college market and leading to dropouts. In late January, Obama proposed a financial aid overhaul that for the first time would tie colleges’ eligibility for campus-based aid programs to success in improving value and affordability for students.  But, Zumeta said, the president overlooked the key intermediary role played by state budgetary decisions. And both Obama proposals require congressional approval.

Attention also needs to be focused on graduation rates, the authors say. Limited state support for higher education needs to provide incentives for both enrollment and graduation, which has not been done in the past. Less than 60 percent of Caucasian students finish college, members of fast-growing ethnic groups (especially Hispanics) have much lower graduation rates, and completion rates for those beginning at two-year colleges are quite low. In 2020, when the economy will be even more knowledge-based, the workforce could be less educated than in 2000 – and it could include a substantial number of people without even a high school diploma. By comparison, nine countries, including Finland, Poland and Slovakia, now best the U.S. in postsecondary degree attainment rates, whereas the U.S. was second just 10 years ago.

Along with overhauling financing arrangements and encouraging students and their families to prepare for college, new ways to provide access are necessary, say the authors. Online courses are one way; credibly certifying skills and knowledge gained outside of traditional schools could be another. All post-secondary preparation need not occur in traditional colleges.

But it still gets down to money. Without demonstrated societal returns in the form of degrees in demand, say Zumeta and his colleagues, hard-pressed politicians and taxpayers won’t shell out more for higher education. Also, to win more taxpayer support, the entire educational system needs to become more visibly efficient.  This means creating better alignment between K-12 and higher education, and providing hard data on policies and methods that improve learning and degree attainment. Better data and new K-16 data systems make such improvements both possible and demonstrable.

All of this is important, the authors say, because higher education generates ideas that lead to new processes and products that drive the economy. But more basically, such education enables people to understand interlinked technical and cultural systems and thereby compete globally.

To construct a new model, the authors say, the nation requires a coalition of well-informed, influential leaders determined to change financing of higher education and bring the public along. The Obama ideas for sharply increasing degree attainment make a great deal of sense, Zumeta said, but the model for higher education needs a top-level coalition focused on complete overhaul of access, affordability and attainment, regardless of who is in the White House.

In his foreword to the book, former North Carolina Gov. James B. Hunt said, “The issues raised in this volume challenge America to realign college finance with core public values. This is a critical 21st century agenda for higher education and public policy.”