Sequencing, splicing and expressing DNA may seem to be the quintessence of cutting-edge science—indeed DNA manipulation has revolutionized fields such as biofuels, chemicals and medicine. But in fact, the actual process can still be tedious and labor-intensive, something Lawrence Berkeley National Laboratory (Berkeley Lab) scientist Nathan Hillson learned the hard way.

After struggling for two days to design a protocol to put together a genetic circuit with 10 pieces of DNA—using a spreadsheet as his primary tool—he was dismayed to discover that an outside company could have done the whole thing, including parts and labor, for lower cost than him ordering the oligonucleotides himself. “I learned two things: one, I never wanted to go through that process again, and two, it’s extremely important to do the cost-effectiveness calculation,” said Hillson, a biochemist who also directs the synthetic biology program at the Berkeley Lab-led Joint BioEnergy Institute (JBEI). “So that was the genesis of the j5 software. This is the perfect thing to teach a computer to do.”

The j5 software package, which has attracted users from more than 250 institutions worldwide since it was made available last year, is now the basis for the latest startup to emerge from JBEI, a Department of Energy research center established in 2007 to pursue breakthroughs in the production of cellulosic biofuels. By building on j5 and adding modules for commercial users, TeselaGen Biotechnology, founded by Hillson and two partners, says it will significantly reduce the time and cost involved with DNA synthesis and cloning, a multibillion-dollar market.

“It’s like AutoCAD for biology,” said TeselaGen co-founder and CEO Mike Fero. “Modern cloning is a computational problem. We are the missing informatic piece to making modern scarless DNA assembly methods a reality for the majority of biologists. Otherwise it’s a small cadre of people who can do it.”

Recombinant DNA assemblies are critical tools in a number of scientific pursuits: for understanding how cells are altered in diseases such as cancer, for building better antibiotics, for converting plant biomass to biofuels and for basic scientific understanding of cellular pathways. Standard cloning techniques have been in use for 40 years and are still the industry standard.

“Our biggest competition is traditional cloning, or inertia,” said Fero, who was a particle physicist for 10 years before pursuing a career in biotech. “We have to make it so easy people will happily switch to the newer methods.” 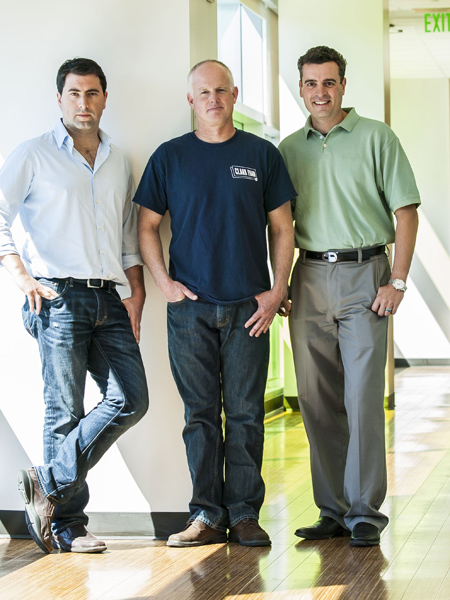 TeselaGen licensed j5 from Berkeley Lab, the lead institutional partner of JBEI, and currently has more than 100 scientists and engineers from large industrial and pharmaceutical companies in private beta.

“We are so pleased with the startup of TeselaGen, based on a deceptively simple idea but clearly providing a solution to a very difficult problem,” said Cheryl Fragiadakis, director of technology transfer at Berkeley Lab. “It is a great example as well of a company coming out of our JBEI activities. The Lab’s Tech Transfer encourages and supports entrepreneurial ventures, providing education and networking for our scientists, as a great way to get technologies out for the benefit of society.”

The cloud-based software not only designs DNA construction protocols, it will compare methods to determine the one that is most cost-effective, weighing, for example, if it is cheaper to outsource a portion of the DNA construction. The more complex the task, the more time and money the program can save. The greatest savings are with combinatorial libraries, collections of hundreds to millions of related DNA assemblies, each with a different combination of genes or parts that perform similar functions in different organisms.

For example, simple construction of a metabolic pathway that takes two and a half weeks and costs $1,400 using traditional cloning can be cut down to two weeks and less than half the cost with j5. A more complex task of constructing a combinatorial protein library (with 243 constructs) would drop from $122,000 and 11 months with traditional cloning to under $30,000 and 1.5 months with j5. The same task using direct DNA synthesis would cost $538,000 and take 2.3 months.

There are other DNA assembly programs, but Hillson says none of them offer the cost-effectiveness calculation. Plus, other programs are not capable of combinatorial design without leaving “scars,” or uncontrolled sequences inserted between parts in the final assembly.

J5 remains available from Berkeley Lab to academic and noncommercial users under a no-cost license agreement. It is also currently being used by JBEI scientists, allowing them to pursue some research projects that would not have been possible before. “Many projects you just can’t design by hand,” said Hillson. “So j5 is enabling bigger scales of science or research than could have been accomplished before.”

TeselaGen is enhancing j5 in several ways: in addition to creating a ISO27001-compliant secure cloud-based infrastructure for commercial users, it is redesigning the front-end user interface, developing a module that will send “build” instructions to a robot and creating a final module that will allow users to optimize the final design after it has been tested.

“The basic paradigm is design, build, test,” said Fero. “However, something you can do in biology that is not typically done in engineering is to evolve your design using some measure of fitness, like biofuel titer or molecule stability. Understanding that fitness landscape is where an iterative combinatorial approach is so valuable. It’s like trying to find the highest point in San Francisco—you could go check the elevation of every square centimeter, but you might be better off at a lower resolution, checking every square kilometer at first. Then, hone in on the top of Mt. Davidson in subsequent rounds of finer and finer grained checks”

Fero says TeselaGen may be the first company to offer such a capability for large molecule (biologic drugs) optimization and biological pathway optimization.

TeselaGen is funded primarily by Fero and another co-founder, Eduardo Abeliuk, who has a doctorate from Stanford University in Electrical Engineering, has published research articles in molecular biology journals and is also a successful entrepreneur. The three founders met at Stanford while pursuing advanced studies in biology and genomics. The company has two U.S. National Science Foundation SBIR (Small Business Innovation Research) grants and is looking for strategic partners and investors. It is located in the QB3/PharmChem Digital Health Garage incubator space in San Francisco’s Mission Bay.

“JBEI is an amazing place,” Fero said. “It’s developing in a publicly accessible way the same kind of infrastructure that is closed at some other companies. We want to put JBEI in a box and enable a whole new generation of synthetic biology-based companies to build biofuels, biochemicals and biologics more cheaply.”