Duplex-sequencing Method Could Lead to Better Cancer Detection and Treatment

During an ice climbing trip to the Canadian Rockies last Christmas, two young researchers from the University of Washington, Drs. Michael Schmitt and Jesse Salk, talked about a simple but powerful idea to get better results when looking at cancer cells. If they could reduce the error rate in DNA sequencing, then researchers could better pinpoint which cells are mutating.

This improvement could lead to early diagnosis of cancer and a better treatment plan once researchers knew which cells were resistant to chemotherapy.

The idea was to sequence both strands of DNA. If they saw a mutation in one strand but not the other, they would recognize it as error from sequencing and not a true mutation.

Their results, published online in the Proceedings of the National Academy of Sciences in August, are getting wide accolades.

“If its power is confirmed, duplex sequencing will likely improve our understanding of the clonal substructure of human cancers, modify the catalog of rare mutations, help to pinpoint mechanisms of mutation generation, and potentially identify mutator phenotypes,” wrote Christopher Klein, with the Experimental Medicine and Therapy Research group at the University of Regensburg, in an accompanying editorial. “Eventually, it may open doors to clinical applications in which diagnostic accuracy is the sine qua non for ethical treatment decisions.

“Based on our estimates, we appear to have improved the accuracy of sequencing by 10 million-fold or more,” said Schmitt, the lead author of the paper, “Detection of ultra-rare mutations by next-generation sequencing.” Schmitt, a postdoctoral fellow in the Loeb lab, added, “This theoretically makes it possible to sequence the entire genome of a cell without a single error.” The genome of a cell is 6 billion nucleotides. 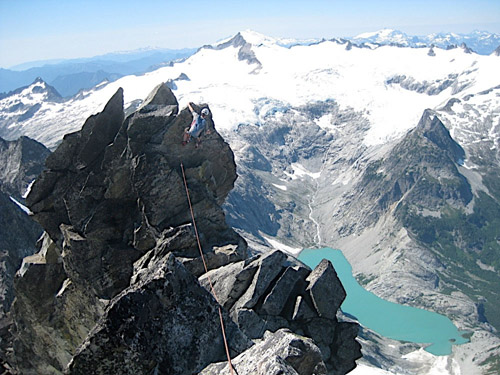 Michael Schmitt and Jesse Salk came up with the idea for the duplex-sequencing method while on a flight to an ice climbing expedition. Image credit: University of Washington

The UW researchers are eager to use this approach to test Loeb’s mutator phenotype hypothesis proposed in 1974. The idea, considered radical at the time, surmises that the mutation rate in the early stages of tumor development is greater than that of normal cells. This could explain how some cancers spread and become resistant to chemotherapies so quickly. If researchers could see which cells are mutating faster, then they could potentially detect cancer cells sooner at a more easily treatable stage.

Loeb said this theory was accepted by just a minute percentage of the scientific community in 1974 and now probably about half.

“Pharmaceutical companies want to believe there is a magic bullet for treating cancer,” he said.

Rather than expecting a magic bullet, the realistic approach is to drastically slow down cancer progression to a point where a patient is more likely to die of something else, Loeb said. He said a cancer drug will kill some of the cells. but pre-existent mutant cells will start to multiply and spread.

Loeb said he will feel vindicated for his mutator phenotype hypothesis once a study looks at DNA from human tumors and normal tissues from the same individual using this new technology. If everything goes well, this duplex-sequencing technology could generate meaningful clinical information from patients in two to three years, he said. The first application could be looking at recurrent tumors.

Duplex sequencing evolved in 2005 with the advent of “next generation sequencing,” which allowed researchers to sequence billions of nucleotides at a time. The most direct means for finding pre-existing cancer cells is to sequence cancer cells and identify cancer-associated mutations. But with the substantial error rate in the original technology, there were too many false-positive findings.

Scott Kennedy, a researcher in the Loeb lab, had been testing a method to refine next generation sequencing called Safe-SeqS, published by Johns Hopkins University researchers last year. Schmitt started working on Safe-Seqs when he joined the lab as well. But they couldn’t get it to work.

“We kept getting really screwy numbers and mutation types that didn’t make any sense,” said Kennedy. “We finally figured out it was due to damaged DNA.”

Kennedy said he and Schmitt spent a significant amount of time discussing how to get around the problem, but didn’t have a solution. It was during a plane ride heading to an ice climbing trip last year that Schmitt and Salk came up with the duplex-sequencing approach. 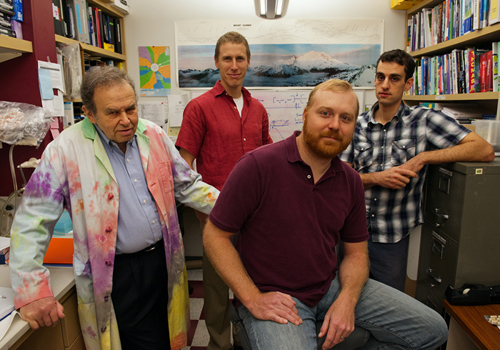 Some of the members of the Loeb lab who worked on the duplex sequencing: Dr. Lawrence Loeb, Scott Kennedy, Dr. Michael Schmitt, and Dr. Jesse Salk. Image credit: Mary Levin

Back in the lab, Schmitt and Kennedy started running experiments sequencing M13 data – a virus that infects bacteria – because they had a good idea what the mutation rate should be. The implementation of a relatively simple concept was quite complicated and involved writing a number of custom programs and analyzing extremely large data sets. Salk, while vacationing in Thailand and doing medical rotations in Washington and Idaho, kept in contact with them through email and Skype.

After only a matter of weeks, the UW researchers had their results. It worked. M13 has an established base substitution frequency of 3.0 x 10-6. Duplex sequencing measured a “nearly-identical” rate of 2.5 x 10-6, the researchers reported.

“It’s pretty remarkable just how quickly it all came together,” said Salk. “In science, very few ideas work as planned. One thing that I think surprised us was that no one had developed this before. The basic premise of the idea was so simple that we spent the better part of a day trying to come up with reasons why to wouldn’t work, thinking that we must have missed something obvious.”

For this new generation of scientists, all of whom are in their early 30s, coming up with an idea took leaving the lab.

“I think the best ideas come when you are doing things you enjoy,” said Salk, whose grandfather, Dr. Jonas Salk, a medical researcher and virologist, discovered and developed the first polio vaccine in 1955. “For me, creativity does not happen in a cubicle.”

Their work is described in a report on Genomeweb that refers to Polymerase Chain Reaction, a technology used for amplifying DNA sequences. “The duplex sequencing method uses 24-nucleotide-long tags split into two 12-nucleotide additions to each end of the DNA molecule, which the researchers calls a ‘duplex tag.’ The tags are incorporated into standard Illumina sequencing adapters. After tagging strands, the researchers PCR amplified them, yielding ‘families’ of molecules marked by a common tag. By grouping molecules that share a tag, the team could then compare sequences among them and eliminate any that didn’t show at least three duplicates with at least 90 percent sharing the same sequence. This step filtered out random errors introduced during PCR or sequencing.”