Through interactive content and thousands of images and historical anecdotes, the IBM THINK Exhibit app is filled with stories of progress, from space exploration to weather prediction and medical advances. It documents the roots of Big Data, from early charts, clocks and scales to microscopes and telescopes, from RFID chips and biomedical sensors in clothing to breath-sensor diabetes detectors.

· An interactive timeline that chronicles how the simple act of measurement has evolved since prehistoric times: measuring length in 2000 BC, time in 1657, the Earth’s rotation in 1851, and atoms in 1981. It traces the roots of modern technologies, from the abacus to the scanning tunneling microscope.

· An explanation of how maps have been used to track data, from early geographical charts to data visualizations.

· A section that chronicles how “models” have been used to understand the complex behaviors of our world – from the Wright Brothers’ plane prototype in 1903, to today’s airline mechanical parts simulations.

· A 10-minute HD film edited from footage shot on location in China, India, Indonesia, Russia, Thailand, Turkey and the U.S. with a new camera rig that captures imagery simultaneously on three video cameras. 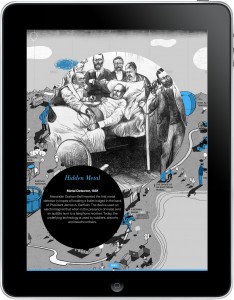 IBM THINK Exhibit App for Tablets Traces Ancient Roots of Modern Innovation. A page from IBM THINK, a free app for IPad and Android tablets that celebrates centuries of cience and tech innovations. It's is an "innovation time machine" that shows how early tools have evolved into modern advances that create healthier populations, greener energy and safer, less congested cities. Image credit: IBM

The app is inspired by IBM’s 2011 THINK pop-up exhibit at New York’s Lincoln Center, a 7,500-square foot interactive experience developed for the company’s Centennial. Visitors were immersed in a film and interactive experience across 40 oversized digital screens. Cited for its design, the THINK exhibit has been placed in the Museum of Modern Art’s permanent collection and received awards from the Industrial Designers Society of America, the Association of Independent Commercial Producers, and the Art Directors Club. Later this year, the exhibit will be installed at Walt Disney World’s EPCOT Center in Orlando, Fla.

Additionally, IBM will be working with the New York Hall of Science to create lesson plans for middle school teachers that integrate the IBM THINK Exhibit app. As part of IBM’s commitment to education, the company will help students better understand some of the scientific concepts behind THINK and inspire them to take innovative action that can improve their local communities. The lessons will be featured on Teachers TryScience a free web site that provides educators with high quality lessons linked with pedagogical and practical supports.

“The IBM THINK Exhibit app is designed for the ‘forward thinker’ in all of us and compels people to think about what it takes to make the world work better,” said Lee Green, IBM’s VP of Brand Experience and Strategic Design.

Earlier this year IBM released another tablet app for tech fans, Minds of Modern Mathematics, which reinvents the massive timeline of the history of math from 1000 AD to 1960 that was part of Mathematica: A World of Numbers…and Beyond, IBM’s 1964 World’s Fair exhibit designed by legendary duo Charles and Ray Eames. It offers biographies, milestones and images of artifacts culled from the Mathematica exhibit as well as a high-resolution image of the original timeline poster. The app was developed by IBM together with the Eames Office.

Making the world smarter is core to IBM’s technological innovation. As demand grows for Big Data analytics gathered from roads, power grids and other sources, IBM is working to make the world smarter — from the Jeopardy!-winning computer Watson that’s improving cancer diagnoses, to systems for forecasting weather and easing power consumption in cities around the world.