The long-sought Higgs boson—the particle that endows all elementary particles in the universe with mass—was elusive no longer when scientists at the CERN physics laboratory in Switzerland, discovered it last summer.

The July 4, 2012 announcement of the discovery appealed to both the general public and the media: Fifty-five media organizations and more than one billion television viewers made it an event that couldn’t be missed. Time even dubbed the Higgs boson “Particle of the Year.”

On Thursday, Feb. 7, the Higgs boson drew a local audience of 400 high school teachers, students and other curious parties to the Reva and David Logan Center for the Arts for a panel discussion called “Critical Mass: How the Higgs Boson Discovery Swept the World.” A few hundred virtual audience members in eight countries and 22 states also participated via webcast. The program was the first in a new, public speaker series that highlights the important research and discoveries taking place at the University of Chicago.

Although the elusive Higgs boson was discovered almost 5,000 miles away at CERN, scientists at the University of Chicago, Argonne National Laboratory and Fermi National Accelerator Laboratory played a major role in the research. The predictions of the Higgs boson’s mass and properties, made by theoretical physicists here, were very close to what was discovered. Experimentalists helped build and calibrate the gigantic machines that detected the presence of this elementary particle, and other scientists developed the computing power that managed and analyzed the enormous amount of data that came out of the experiments.

“The discovery of Higgs boson confirms the existence of the Higgs field, which gives mass to all fundamental particles,” said Marcela Carena, a theoretical physicist at Fermilab. “Without the Higgs field, the universe would be vastly different.” 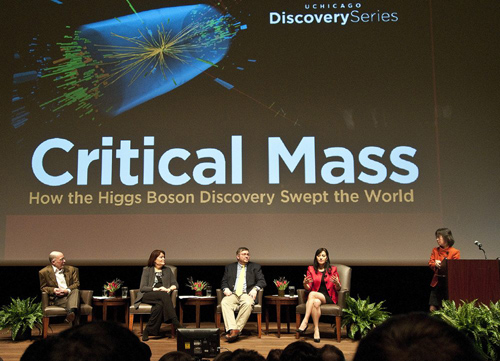 To find the tiny Higgs boson, it took a huge machine, the Large Hadron Collider, one of the most complex and sophisticated machines ever built. The machine’s accelerator is 17 miles in circumference, and one of its detectors is five-stories-tall. Parts of this detector were assembled at Argonne and shipped to CERN, piece by piece. The cargo was so precious that it was divided into many parts so less would be lost if one ship went down.

Why was the machine so expensive to build, was one of the many lively and provocative questions posed by moderator Young-Kee Kim, the Louis Block Professor in Physics, the Enrico Fermi Institute and the College, and deputy director of Fermilab.

“As we built, we had to invent and make new tools,” answered Mark Oreglia, professor in physics. “And everything was state-of-the-art.” 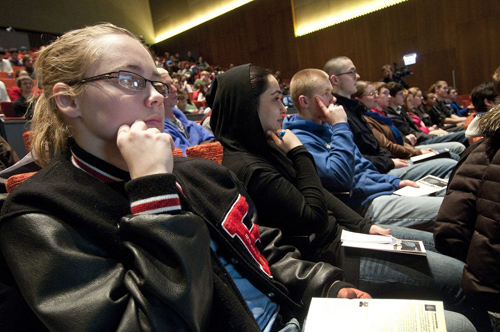 The University invited science teachers from several Chicago area high schools to attend three full-day workshops at Argonne, Fermilab and the University of Illinois to help them prepare their students for the culminating panel presentation at the Reva and David Logan Center for the Arts. Busloads of students and educators from Lockport Township, Oak Lawn Community High School, Pritzker College Prep and Rossville High School came to the Higgs boson event. Photo by Lloyd DeGrane

The panelists justified the costs, noting that the Large Hadron Collider will be used for a long time, and they stressed that there is still much to be done to understand Higgs boson’s properties. In addition, the machine could be used to discover other fundamental particles.

“Don’t get the impression that with the discovery of Higgs boson it’s all over,” said Donald Levy, Vice President for Research and for National Laboratories. “This is a big step—but one step as science moves on.”

The advancement of physics is not the only benefit derived from LCH and other accelerators. Indirect benefits include superconducting magnets and the imaging technology behind PET scanners. Also, particle beams are used for industrial welding and even to sterilize milk cartons.

“The protocol for communicating via the Internet was developed, in part, by scientists working at CERN, where groups larger than 500 scientists around the world needed a better way to share information,” added Patricia McBride, head of Fermilab’s Compact Muon Solenoid Center, a Large Hadron Collider detector collaboration of more than 3,500 people from around the world. 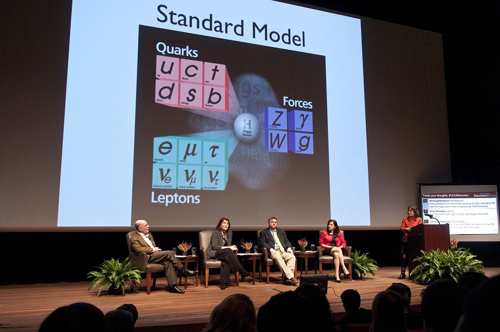 Panelists explain the science behind the Higgs particle, which underpins the so-called Standard Model upon which the modern study of physics is based. Photo by Lloyd DeGrane

Tom LeCompte, an Argonne physicist and former head of ATLAS (A Toroidal LHC Apparatus), the other large detector collaboration at LHC, surprised the audience by saying that the most important thing these labs and experiments produce is graduate students who go off and do things that might or might not have anything to do with high-energy physics.

“The real benefits coming out of this type of work—for society as a whole—are the people and the skills they develop doing this kind of research,” LeCompte said, citing former students who work on lightening arresters for aircraft, improve cell phone technologies and teach science.

The latter point was on target, as this UChicago Discovery Series program was oriented toward reaching Chicago area high school students and engaging their curiosity about science. The University sponsored three full-day workshops at Argonne, Fermilab and the University of Illinois to help teachers prepare students for the panel presentation. 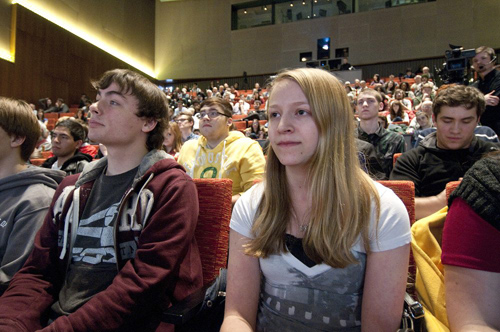 High school students from across the Chicago region, including some whose teachers participated in workshops to prepare students for the event, attended the discussion and commented on the panel in real time via Twitter. Photo by Lloyd DeGrane