Even in the same animal, not all bites are the same. A new study finds that because the force in a muscle depends on how much it is stretched, an animal’s bite force depends on the size of what it is biting. The finding has direct implications for ecology and evolution.

PROVIDENCE, R.I. [Brown University] — Many animals prefer food — snails, nuts, etc. — that must be cracked and crushed. Scientists have measured the maximum force of their impressive bites before, but a new study introduces a significant subtlety: bite force depends not only on the size and strength of the eater, but also the size of the eatee. That insight has important implications in the lives of predators and prey.

“Everybody measures bite force as one value,” said Nicholas Gidmark, a postdoctoral researcher in the Department of Ecology and Evolutionary Biology at Brown University and lead author of the new study published Feb. 14, 2013, in Biology Letters. “There’s a lot more nuance to it than that.”

The nuance comes from a well-understood phenomenon of physiology that had never before been measured in terms of a living animal’s bite force: The force a muscle can exert depends on how long that muscle gets preparing for the chomp. 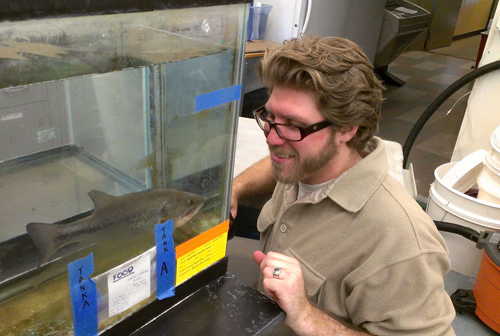 Big bite may not be best bite. Nicholas Gidmark tends a research subject. Bite force varies with morsel size. If a morsel is too large or too small, the jaw muscles do not move through their optimal length and may not crush it. A middle-size morsel is just right. Image credit: David Orenstein/Brown University

Gidmark and his co-authors hypothesized that the length-force relationship could have culinary consequences. For an individual animal, too much stretch (for a big piece of food) or too little stretch (for a small piece of food) would weaken the bite compared to the stretch required to crush an optimally sized morsel. To test this idea they conducted a series of experiments with black carp, which normally dine on fresh escargot and have conveniently simple jaws.

The stakes are quite high for the carp, which is why the study matters to their evolution as predators.

“You have to break a snail in order to eat it,” Gidmark said. “If you don’t have enough bite force to break that snail, you get nothing from it.”

The scientists started out by training carp of three different sizes to eat not snails but food-stuffed ceramic tubes, which had standardized and easily measured diameters and strength. Gidmark’s team had coated some of the tubes with various amounts of polyurethane to create a variety of strengths for each diameter. Tests with a piston-activated crushing device allowed them to measure how much force was required to crack them.

On each fish, the scientists then inserted tiny metal balls into strategic locations on the jaws to act as x-ray markers of jaw position and muscle length. Once the fish recovered from the implants, Gidmark and his colleauges methodically fed each one tubes of different diameters and strength. They recorded X-ray videos of the chewing and noted which tubes the fish could crush and which they could not.

After the feeding trials, the scientists then dissected the fish to make more direct measures of muscle force and muscle length. Keeping the jaw muscles alive, they stimulated them so that they would chomp down. The jaw, meanwhile, was connected to a force transducer that measured the bite.

Finally, Gidmark and his team fed the jaw bone position data into a 3-D animated computer model of the fish jaws. That gave the researchers an even richer set of measures of muscle stretch.

In all, what they found is that for each fish, bite force depended heavily on tube size and that bite force peaked at an optimal amount of muscle stretch. Too much or too little lengthening led to profound reductions in bite force. A stretch of either about 85 percent or 115 percent of the optimal value led to bite force that was only about half as strong as at the optimal stretch.

The strongest carp bite was about 700 Newtons, or 157 pounds, of force. That allowed the biggest carp to crush strong tubes that happened to be the right size, even when it couldn’t crush weaker tubes that were too big or too small.

“Successfully crushed intermediate-sized ‘prey’ were stronger than larger and smaller ‘prey’ that were uncrushable, indicating a performance optimum at intermediate prey sizes,” the authors wrote.

Were snails in an ecosystem’s population to begin growing larger or smaller, in other words, carp could gain or lose the ability to eat them. Small carp might have to stretch too far to crush bigger snails, for example, but larger carp might find that those larger snails had evolved right into their biting sweet spot.

“Depending on how prey is defending itself, whether it is getting big or strong or both, it will have an important impact on those relationships between predators and prey,” Gidmark said.

The muscle-length bite-strength relationship likely holds for humans, Gidmark said, but probably very few people depend on crushing hard, co-evolving foods for daily sustenance. Still, Gidmark said he is eager to determine how the findings might extend to other species and their ecology.

“There is variable bite-force with gape,” he said. “The implications of that are all over the place. This really sets the ground for a lot of cool ecology and predator-prey interaction studies.”

In addition to Gidmark, the study’s co-authors are Nicolai Konow, Eric LoPresti, and Elizabeth Brainerd.

Support for the research came from The American Society for Ichthyology and Herpetology, Sigma Xi, the W.M. Keck Foundation, the National Science Foundation (grant: 0840950) and the Bushnell Graduate Research and Education Fund.