*BizSpark One startup Soundtrckr lets listeners discover, play and share music on their terms — alongside their friends.*

REDMOND, Wash. — April 27, 2011 — Soundtrckr, a BizSpark One startup, mashes Internet radio with social networking and location-awareness to help users create a soundtrack for their lives.

Sometimes, opportunity presents itself when least expected. That’s what Daniele Calabrese, founder and CEO of Soundtrckr, discovered as he boarded a plane bound to Philadelphia from Madrid. Calabrese was launching a new concept in radio called Soundtrckr, a geo-social Internet music service. In its infancy, Soundtrckr just needed the right connections to take it to the heights Calabrese was convinced it could reach. He sat down and met his seat mate.

“I wanted to have a contact on Windows Phone 7,” he explains. “And I wound up sitting right next to one of the Windows Phone 7 platform advocates on the flight. We were immediately exchanging ideas and talking nonstop.”

Soundtrckr blends Internet radio with social networking and location-awareness. With it, people can play music they enjoy, find people nearby who are playing other types of music, and listen to their choices. Plus, they can connect with their friends and make new ones through a built-in chat feature.

“I looked at the growth of mobile devices along with the widespread availability of music in general,” Calabrese says. “And I thought, ‘why is there not a service that lets anyone create radio stations anywhere in the world and share them with others?’” 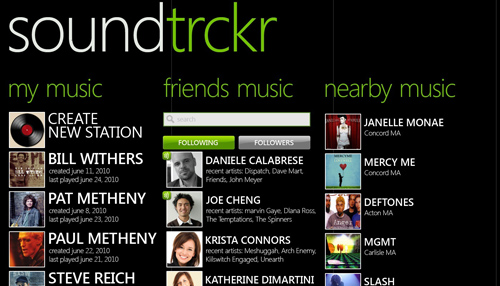 Soundtrckr lets users create their own radio stations and follow the music of friends and others nearby. Image credit: Microsoft

After Calabrese’s fortuitous airplane ride, the company joined Microsoft BizSpark, taking advantage of the software, support and visibility the program offers to startups. Soundrckr was then selected as part of the core group of 20 applications featured in the Windows Phone 7 launch in October 2010. After Calabrese’s year and a half of hard work and sleepless nights preparing for Soundtrckr’s own introduction to the marketplace, it went from zero users to more than 650,000 unique visitors in less than three months with the boost it received through the debut of Windows Phone 7.

The service is currently available in six different languages and 175 countries. Using MediaNet, Soundtrckr offers listeners access to more than 11 million music tracks, with 20,000 new ones added weekly. That song list easily outstrips its nearest competitor, Pandora, which claims an estimated 750,000 songs in its catalog.

The now burgeoning startup was inspired by Calabrese’s love of music and his global travels as an executive for World Bank. “It was very clear to me about three years ago that there was a new way to translate music radio into the digital space,” he says. “Radio has two fundamental features: It’s about where you are and what’s happening around you, and it’s about being tuned in to the same channels discovering music together with other listeners.”

“There is always a soundtrack to where you are and where you’ve been — so why not create a service that allows users to soundtrack their lives, discover music with their friends and share it with anyone else around them?”

Soundtrckr’s biggest challenge in the early days was just holding everything together as it moved toward fruition. “Strategy, technical execution at the product level, drawing a healthy user base, being responsive to feedback, maintaining business relationships and obtaining funding — everything was happening at the same time for us,” he explains.

There was the added but fundamental component of behavior modification to consider as Calabrese and his team conceptualized and built Soundtrckr. 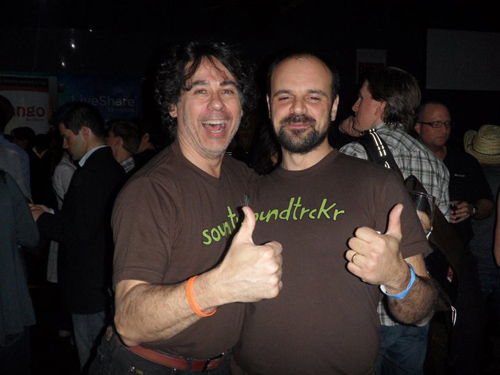 “We were taking a behavior that already exists — listening to the radio — and building social and geographic factors into it. We had to think about building Soundtrckr in a way that we could take existing radio-listening behaviors and guide people to new behaviors in which they would want to listen to music on their phone or computer and interact with others at the same time.”

Listeners sign in through their mobile devices (Windows Phone, iPhone, Nokia and Bada), type in the artist they want to hear, then let Soundtrckr do the rest. Type in “Adele,” for example, and Soundtrckr will play a few of her songs, then move to other artists in her bluesy genre, such as Amy Winehouse. As users select artists, Soundtrckr keeps track of them to create personalized “radio stations” that users can return to repeatedly.

In addition — and a key competitive distinction for Soundtrckr — listeners can see a list of the stations created by people nearby and by friends. A connection with Facebook and Twitter allows users to chat with one another as well.

The unique spelling of the company name plays on Soundtrckr’s multiple uses, says Calabrese. “It’s music, it’s tracking what you listen to, it’s sharing what other people are listening to and it’s connecting socially based on geography. It’s a bit of wordplay about tracking the sounds you enjoy.”

Calabrese has seen a few unexpected behaviors as people use Soundtrckr to connect with others. “Music is an icebreaker,” he explains. “When you decide to put your music on a map, anybody around you can discover what you’re listening to and make determinations about who you are.”

“When someone tunes into the artists you are playing in real time, they hear the same music. Open a chat, and a communication line begins between all the users in that channel. We’re definitely seeing the emergence of flirting using Soundtrckr’s music as an icebreaker, like they would in a nightclub.”

The difference from a nightclub, Calabrese points out, is that people can tune in and connect any time of day from anywhere using Soundtrckr.

Soundtrckr is currently a free service that lets users purchase individual songs, but Calabrese has several long-term strategies to ensure Soundtrckr is a profitable business. “Starting soon, we’ll be adding some ticketing options in cooperation with Songkick to help listeners learn about concerts and additional activities based on their music preferences,” he says. “From a business perspective, that opens up relationships with ticket vendors, concert promoters and the like. We are very focused on nailing that component.

“Radio is a form of discovery, and the Internet helps facilitate that,” he says. “There’s an interesting play, too, for Soundtrckr in terms of helping to launch artists, connecting them with fans, virally distributing their music and keeping track of all the data about how their music is being played.”

Calabrese points to the serendipitous seating arrangement on his overseas flight as a key transition point for Soundtrckr. “I knew that Soundtrckr needed to exist on multiple platforms to reach people everywhere and grow quickly. Connecting with Microsoft gave us the break we needed to then reach out to other partners like Nokia, Samsung, Google and Apple and show them what Soundtrckr could do.”

Using Windows Azure, Microsoft’s cloud platform, allows Calabrese to provide listeners with the ability to instantly search the catalog of 1 million artists, and have their search typos corrected and predictive artist selections suggested for them.

He promises that users will see even more innovation in the coming months, including integration with the Internet Explorer 9 pinned site feature, which allows quick and easy access to the music player as well as top stations from friends and people nearby. “Plus, we’ll be bringing the experience of Soundtrckr to slate PC products and we plan to integrate it into Xbox later this year.”

“Soundtrckr is all about discovering music,” says Calabrese. “It’s not about a DJ who controls the programming. With Soundtrckr, people play, discover and share music with their friends — the listeners are in control.”