In a room in the basement of Hillhouse Avenue, 18 Yale students have spent the past 12 weeks transforming gears, wing nuts and sprockets into energy solutions for farmers working thousands of miles away in sub-Saharan Africa.

The class, called “Appropriate Technology for the Developing World,” was inspired by a trip that faculty member John Morrell took to Africa in 2009 with an international team of scientists, after learning that African farmers often earn just $1 to $2 a day.

With limited or no access to the power grid and no money for large farm equipment like tractors, the farmers, the team realized, could boost their productivity and earnings if they could use everyday items like bicycles and motorbikes to power flour mills, fans and water pumps. But coming up with solutions that work in the context of the developing world is about much more than simply producing energy.

“These aren’t just technological problems,” explains Morrell, assistant professor of mechanical engineering. “There are a lot of different factors involved. There are cultural, political and socioeconomic influences at play.” 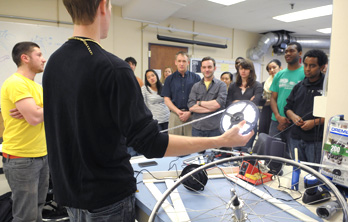 Joseph Belter describes how a few minutes of bicycle pedaling could produce enough energy to power a string of LED lights, which could replace several kerosene lamps. African farmers typically spend up to one third of their earnings on power, Belter says. Image credit: Yale University.

To address all those different aspects of the challenge, Morrell wanted to create a class made up of different kinds of students. The 18 enrolled in this year’s inaugural course include sophomores to graduate students majoring in fields from engineering to economics to political science.

Some have firsthand experience with the developing world and its unique needs and challenges, such as Harrison Leaf, a master’s student in the School of Forestry & Environmental Studies, who founded an NGO in Kenya called AccessWind.

Leaf knows that any potential solutions the students come up with in the classroom must be easy and inexpensive to implement in the real world if they are to stand a chance of actually being adopted by the farmers. “We’re trying to tap into existing infrastructure, not push new stuff on them,” he says.

Like all of the engineering projects the students have developed over the past three months, the project Leaf is working on centers on a universal power coupling — a four-inch cylindrical device that is made up of several sprockets and that the class hopes might transform the way African farmers generate power. The idea is that the universal power interface (or “UP” for short), will allow the farmers to transfer mechanical energy from a variety of available power sources to a host of different devices.

For instance, Leaf is working on an interface that would let farmers pedal on a bicycle — which are very common in Africa — for maybe 20 minutes in order to provide enough power to a string of LED lights that would let their children read a book at night. The mechanical energy that’s generated (and converted into electricity with a simple alternator) could be stored in car batteries, Leaf says, which many families already own but which often require hours-long bus rides to charging stations. This way, families could generate and store their own energy at home, which would be available whenever and for whatever purpose it’s needed, he notes.

Another project would let farmers convert energy from cars or motorbikes — which can travel from farm to farm — into electricity to use for any number of applications requiring more power, such as shelling corn, milling flour or powering fans to dry cassava, a local crop that must be processed within 48 hours of harvest. If farmers can dry the cassava and mill it into flour, it’s much more profitable than in its natural form.

Taking into account those kinds of economic considerations is the focus of another team in the class — the only non-engineering team — that focuses on commercialization. They deal with the economic practicalities of how the technology being developed can best be put into practice. The team calculated, for instance, that fresh cassava is worth only 2 to 4 cents per pound, while cassava flour is worth anywhere from 80 cents to $1.30. Working together, the teams come up with the simplest solutions that can have the most impact on the lives of sub-Saharan Africans.

Joseph Zinter, who co-teaches the class with Morrell, is a biomechanical engineering graduate student, who grew up with a machinist father and has always loved “tearing things apart.” He developed the first UP coupling specifically for the class. He hopes the device will become the standard for transferring mechanical power, just like power outlets and plugs have become the standard coupling for providing electricity to just about every electrically powered device. If designers can assume a standard coupling, then they can create and invent devices to work with that coupling, which will be less expensive and more flexible than making dedicated, single-function devices. In some cases, the farmer will need only one engine on his farm — which could be his motorbike or that of a neighbor — to power multiple machines.

Zinter, who hopes to go into teaching, helped Morrell come up with a flexible format for the class, which is unlike anything that has been taught before at Yale. With such different backgrounds, it’s partially up to the students to decide what they want to get out of the class, so students who wanted to acquire technical skills could do that, while others interested in the commercialization aspect could focus on those issues.

“We’re used to teaching one type of student, or one thing to many students,” Zinter said. “But in this class, we don’t expect every student to learn the same thing.”

Zinter, Morrell and the students of ME 491 don’t want the learning to end in the classroom. They want to secure funding that will allow them to travel to Africa this summer so they can test their innovations in a real-world context with the people who, they hope, will one day benefit from them.

The “Appropriate Technology for the Developing World” class will present their projects during a special event on Thursday, April 28, from 5 to 7 p.m in Rm. 101 of Linsly Chittenden Hall, 63 High St. The event is open to the public.

This article is written by: Suzanne Taylor Muzzin.