Anti-Helium Discovered in the Heart of STAR

Eighteen examples of the heaviest antiparticle ever found, the nucleus of antihelium-4, have been made in the STAR experiment at RHIC, the Relativistic Heavy Ion Collider at the U.S. Department of Energy’s Brookhaven National Laboratory.

“The STAR experiment is uniquely capable of finding antihelium‑4,” says the STAR experiment’s spokesperson, Nu Xu, of the Nuclear Science Division (NSD) at Lawrence Berkeley National Laboratory (Berkeley Lab). “STAR already holds the record for massive antiparticles, last year having identified the anti-hypertriton, which contains three constituent antiparticles. With four antinucleons, antihelium-4 is produced at a rate a thousand times lower yet. To identify the 18 examples required sifting through the debris of a billion gold-gold collisions.”

Collisions of energetic gold nuclei inside STAR briefly recreate conditions in the hot, dense early universe only millionths of a second after the big bang. Since equal amounts of matter and antimatter were created in the big bang they should have completely annihilated one another, but for reasons still not understood, only ordinary matter seems to have survived. Today this excess matter forms all of the visible universe we know. 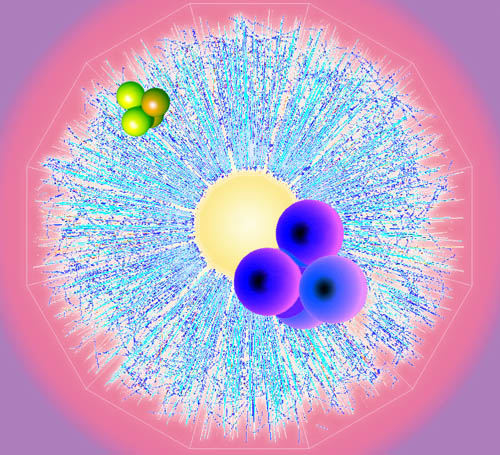 Roughly equal amounts of matter and antimatter are created in the collision of energetic gold nuclei, but because the fireball expands and cools quickly, antimatter can survive long enough to be detected. An ordinary helium-4 nucleus (background) is here matched by a nucleus of antihelium-4 (foreground). Image credit: STAR Collaboration and Lawrence Berkeley National Laboratory

Roughly equal amounts of matter and antimatter are also produced in heavy-ion (gold nuclei) collisions at RHIC. The resulting fireballs expand and cool quickly, so the antimatter can avoid annihilation long enough to be detected in the Time Projection Chamber at the heart of STAR.

Ordinary nuclei of helium atoms consist of two protons and two neutrons. Called alpha particles when emitted in radioactive decays, they were found in this form by Ernest Rutherford well over a century ago. The nucleus of antihelium-4 (the anti-alpha) contains two antiprotons bound with two antineutrons.

The most common antiparticles are generally the least massive, because it takes less energy to create them. Carl Anderson was the first to find an antiparticle, the antielectron (positron), in cosmic ray debris 1932. The antiproton (the nucleus of antihydrogen) and the antineutron were created at Berkeley Lab’s Bevatron in the 1950s. Antideuteron nuclei (“anti-heavy-hydrogen,” made of an antiproton and an antineutron) were created in accelerators at Brookhaven and CERN in the 1960s.

Each extra nucleon (called a baryon) increases the particle’s baryon number, and in the STAR collisions every increase in baryon number decreases the rate of yield roughly a thousand times. The nuclei of the antihelium isotope with only one neutron (antihelium-3) has been made in accelerators since 1970; the STAR experiment produces many of these antiparticles, having baryon number 3. The antihelium nucleus with baryon number 4, just announced by STAR based on 16 examples identified in 2010 and two examples from an earlier run, contains the most nucleons of any antiparticle ever detected. 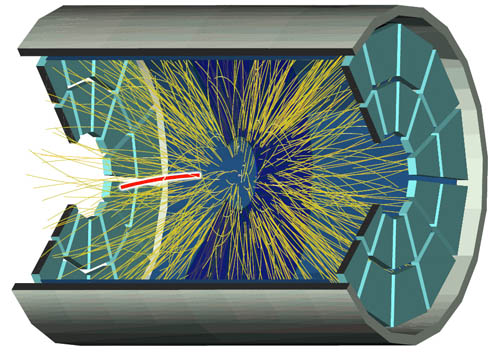 The track of an antihelium-4 nucleus, highlighted in red, appears in a myriad of tracks produced by a gold-gold collision inside the STAR detector at RHIC. STAR’s Time Projection Chamber measures the momentum and mass of the collision events, which are sifted to select particles with specific characteristics. Image credit: STAR Collaboration

“It’s likely that antihelium will be the heaviest antiparticle seen in an accelerator for some time to come,” says STAR Collaboration member Xiangming Sun of Berkeley Lab’s NSD. “After antihelium the next stable antimatter nucleus would be antilithium, and the production rate for antilithium in an accelerator is expected to be well over two million times less than for antihelium.”

NSD’s Maxim Naglis adds, “Finding even one example of antilithium would be a stroke of luck, and would probably require a breakthrough in accelerator technology.”

If antihelium made by accelerators is rare, and heavier antiparticles rarer still, what of searching for these particles in space? The Alpha Magnetic Spectrometer (AMS) experiment, scheduled to be launched on one of the last space-shuttle missions to the International Space Station, is an instrument designed to do just that. A principal part of its mission is to hunt for distant galaxies made entirely of antimatter.

“Collisions among cosmic rays near Earth can produce antimatter particles, but the odds of these collisions producing an intact antihelium nucleus are so vanishingly small that finding even one would strongly suggest that it had drifted to Earth from a distant region of the universe dominated by antimatter,” explains Hans Georg Ritter of Berkeley Lab’s NSD. “Antimatter doesn’t look any different from ordinary matter, but AMS finding just one antihelium nucleus would suggest that some of the galaxies we see are antimatter galaxies.”

Meanwhile the STAR experiment at RHIC, which has shown that antihelium does indeed exist, is likely to hold the world record for finding the heaviest particle of antimatter for the foreseeable future.

“Observation of the antimatter helium-4 nucleus,” by the over 300 members of the STAR Collaboration, representing 54 institutions in 12 countries (H. Agakishiev et al), appears in Nature, online at https://www.nature.com/nature and at https://arxiv.org/abs/1103.3312 . This work was supported by the DOE Office of Science.

For more about the discovery of the antihelium-4 nucleus, read the Brookhaven press release at https://www.bnl.gov/bnlweb/pubaf/pr/PR_display.asp?prID=1259 .

STAR’s Time Projector Chamber is a cylinder filled with dilute gas and placed in a uniform (solenoidal) magnetic field (STAR stands for Solenoidal Tracker at RHIC). Charged particles created in beam collisions ionize the gas as they streak through it; how much the trails bend in the magnetic field reveals their momentum. Detecting antihelium also depends on measuring particle mass, which can be learned from how much energy the particles lose in flight and how long it takes them to reach the sides of the cylinder.

A series of “event triggers” picks out particles matching the specifications of those the researchers are looking for. The data generated by STAR travel to the National Energy Research Scientific Computing Center (NERSC), managed by Berkeley Lab, via DOE’s high-bandwidth Energy Sciences Network (ESnet).

Time projection chambers were invented by David Nygren of Berkeley Lab’s Physics Division and are used at accelerators around the world; the time-projection-chamber principle inspired the original proposals for the STAR experiment within Berkeley Lab’s NSD. STAR’s Time Projection Chamber was designed by NSD’s Howard Wieman, built by Berkeley Lab physicists and engineers, and shipped to Brookhaven on a C-5 cargo plane.

The installation of a large time-of-flight detector in 2009 added measurement capabilities to STAR that were vital to the identification of antihelium-4. It was constructed jointly by U.S. and Chinese institutions and jointly funded by DOE’s Office of Science and the National Natural Science Foundation of China, China’s Ministry of Science and Technology, and the Chinese Academy of Sciences.

Lawrence Berkeley National Laboratory addresses the world’s most pressing scientific challenges by advancing sustainable energy, protecting human health, creating new materials, and revealing the origin and fate of the universe. Founded in 1931, Berkeley Lab’s scientific expertise has been recognized with 12 Nobel prizes. The University of California manages Berkeley Lab for the U.S. Department of Energy’s Office of Science. For more, visit https://www.lbl.gov/ .

One of ten national laboratories overseen and primarily funded by the Office of Science of the U.S. Department of Energy (DOE), Brookhaven National Laboratory conducts research in the physical, biomedical, and environmental sciences, as well as in energy technologies and national security. Visit Brookhaven Lab’s electronic newsroom for links, news archives, graphics, and more (https://www.bnl.gov/newsroom) or follow Brookhaven Lab on Twitter (https://twitter.com/BrookhavenLab).