Prey-tell: Why Right Whales Linger in the Gulf of Maine

As they might with most endangered animals, scientists consider the whereabouts and activities of right whales extremely important.  “It is helpful to know where they go, why they go there and what they do when they’re there,” says Mark F. Baumgartner of the biology department at the Woods Hole Oceanographic Institution (WHOI).

Baumgartner and his colleagues studied the behavior of right whales and sei whales—both endangered species of baleen whales—in the waters of the Gulf of Maine to the east of Nantucket. They found that the location, the length of stay, and perhaps the very abundance of the whales may be dependent on an interesting vertical migration pattern by the copepods on which the whales feed. It seems to be a case, he said, of “how the behavior of the prey influences the behavior of the whales.”

The algae-eating copepod, Calanus finmarchicus, appears to migrate up and down in the water column to avoid being eaten by predators such as herring and sand lance. Since these fish need to see their prey in order to feed, copepods often remain at depths where sunlight will not penetrate during the daytime. Under cover of night, they leave this deep, dark refuge, swim to the surface, and feed on algae in relative safety. 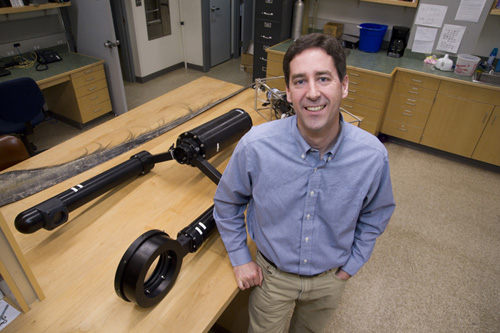 Mark Baumgartner in his lab. On the bench behind him is a video plankton recorder (the black instrument), an underwater microscope that takes close-up digital photographs of copepods in the ocean, and a piece of baleen, a part of the complicated filtering apparatus that whales use to strain plankton from the water. Image credit: Tom Kleindinst, Woods Hole Oceanographic Institution

In turn, this pattern, the scientists report in a recent issue of the journal Marine Ecology Progress Series, has a “dramatic impact” on the behavior and whereabouts of the whales. They found that right whales, which are capable of feeding at depths of 450 to 600 feet below the surface, continued to stay in the area and feed on copepods deep in the water column during the day. The sei whales, on the other hand, were “significantly less abundant” when the copepods displayed vertical migration. Unlike the right whales, the sei whales probably cannot feed at depth during the day, so they may leave the area in search of better feeding conditions elsewhere.

For reasons not well understood, the critically endangered right whale is vulnerable to being hit by ships while at the surface. Baumgartner points out that nighttime may prove particularly dangerous for right whales as they feed on copepods that have migrated to the surface, yet captains piloting ships in the dark have no way to see and avoid the whales. 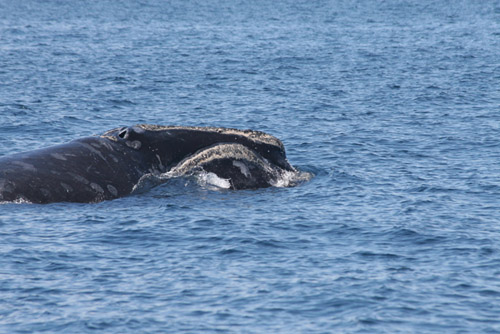 A North Atlantic right whale head, with blowholes and roughened patches of skin called callosities clearly visible on the top of the head. Callosities can also be seen on the side of the head; these are actually at the margin of the whale's lower lip, which covers most of the side of the whale's head. Image credit: Mark Baumgartner's lab, Woods Hole Oceanographic Institution

“Our study also helps us understand why right whales stick around in this area, from about mid April to mid June,” Baumgartner said. Because of their ability to feed below the surface, “they are able to out-compete the herring” for food, he said.

At the same time, the herring and sand lance, by inducing the copepods’ vertical migration behavior, “are likely influencing the distribution and abundance of sei whales” in that area, the researchers report. However, since the sei whale population numbers in the thousands, Baumgartner said their tendency to go elsewhere to look for food is not as great a concern as it would be for the right whale. 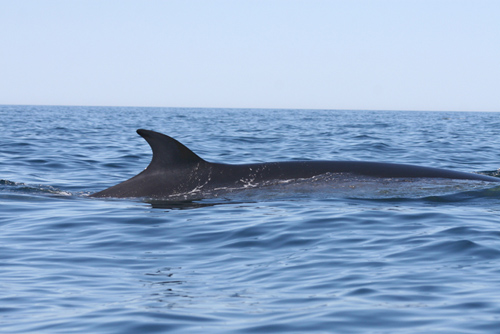 A sei whale photographed in the Great South Channel between Nantucket and Georges Bank. Pronounced "say," this whale gets its name from the Norwegian word for pollack because both the fish and the whales typically appear in Norwegian waters around the same time each year. Sei whales can grow up to 60 feet long, so most above-water photographs like this are of only a part of the body, in this case, the dorsal fin. Image credit: Amalia Aruda, Woods Hole Oceanographic Institution

“The good news is that the recovery of herring stocks is not going to be a problem for the right whale population,” Baumgartner said. “The bad news is that if the right whales are feeding at the surface at night, they are at greater risk for ship strikes than we had thought earlier.”

Baumgartner was joined in the study by Nadine S.J. Lysiak of WHOI and researchers from UMass Boston and the NOAA Northeast Fisheries Science Center in Woods Hole. 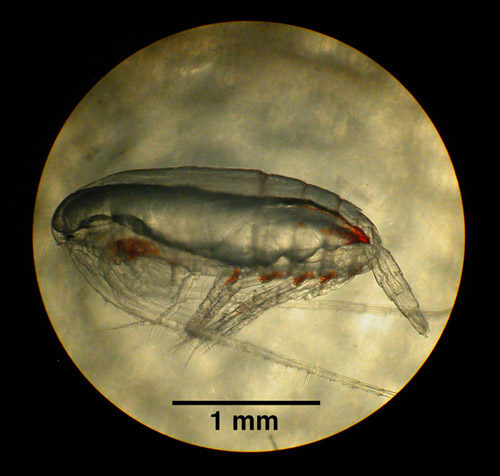 An image of Calanus finmarchicus, the species of tiny crustacean that practices vertical migration and is preferred by North Atlantic right whales. Although small, these crustacean are high in fat content, making them a very nutritious meal. Scientists estimate a right whale must eat 1-2 billion of these crustaceans every day. Image credit: Mark Baumgartner, Woods Hole Oceanographic Institution

Funding was provided by NOAA, the Office of Naval Research, the WHOI Ocean Life Institute, and the WHOI John E. and Anne W. Sawyer Endowed Fund.