Like urban bike-sharing programs everywhere, Chicago’s Divvy must contend with a key problem: due to commuting patterns, some bike stations empty out fast while others fill up quickly, leaving no space for more drop-offs.

But such urban problems can be addressed with socially minded computer science, as a group of 50 Chicago high school students learned recently during a daylong conference at the University of Chicago.

The event, called the “Chicago: City of Big Data” High School Hackathon, showed students how to solve neighborhood challenges, from crime to potholes, through the use of data sets available for free through the City of Chicago Data Portal, launched in 2012. The conference, a joint initiative of UChicago and Argonne National Laboratory, was organized by the Computation Institute and took place at the Searle Chemical Laboratory on campus.

“This is what computers were made for, to solve problems,” said William Woods, a senior at Lindblom Math and Science Academy in the West Englewood neighborhood. Woods, 18, said he was drawn to computers at a young age and wants to pursue computer science as a career. “This is totally what I want to do,” he said. 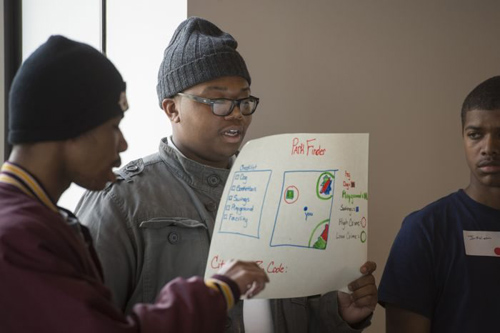 Students explain their data projects at the conclusion of the University of Chicago Computation Institute’s High School Hackathon, held at the Searle Chemistry Laboratory on campus. Photo by Robert Kozloff

Students from nearby Kenwood Academy, South Shore International College Preparatory High School and the University of Chicago Charter School’s Woodlawn campus joined Woods, as they share a similar fascination with computer science and its problem-solving potential.

“We were really excited about bringing students into contact with these ideas, enabling them to see data as an empowering tool that can be used to help find solutions to everyday challenges urban areas face,” said Shaz Rasul, director of the University of Chicago’s Neighborhood Schools Program, part of the Office for Civic Engagement. Rasul’s program seeks to create partnerships between local schools and University students, staff and faculty. “It’s great to see the creativity and ingenuity that the high school students bring,” he added.

The Hackathon partnered with the Data Science for Social Good Fellowship, a University of Chicago program funded by Google Chairman Eric Schmidt that brought 40 undergraduate and graduate students with backgrounds in computer science, statistics, public policy and social science to Chicago last summer to explore how societal problems might be solved with the creative use of data.

“We looked for applicants who were interested in using their data and analytics skills to help society, to do something that would make an impact,” said Rayid Ghani, research director of the Computation Institute’s Urban Center for Computation and Data and chief data scientist with the Obama for America campaign in 2012. 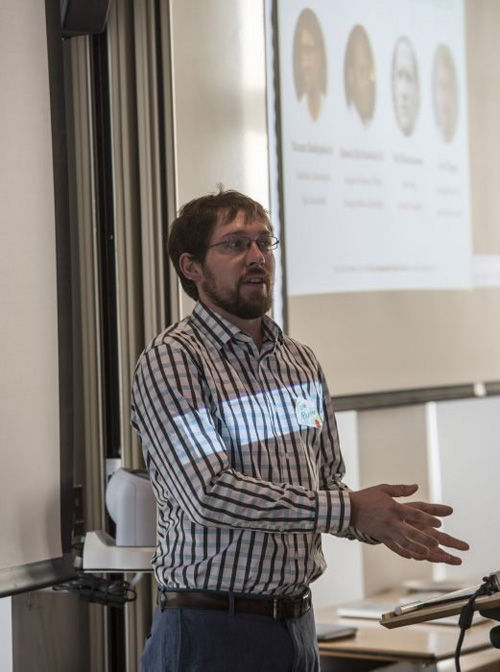 Mentor and data scientist Tom Plagge talks with students during the Hackathon. Photo by Robert Kozloff

Some of the fellowship’s mentors and fellows were on hand Thursday to discuss how they used complex data to improve city services, such as streetlight maintenance and public transit. In the case of the Divvy program, they explained how data analysis could predict how many bikes will likely be at specific stations, which can help direct the blue Divvy trucks that carry bikes from full stations to racks that will need more bikes.

The speakers also challenged the students to identify their own problems and come up with solutions.

Tom Plagge, who served as a “mentor” in the DSSG program last summer, led a break-out session in which he encouraged students to think about how violent crime, particularly gang violence, could be predicted—and possibly prevented—through better police response. “What data points could we look at to investigate when a clash might happen?” he asked the group.

Students concluded that if more community members reported when and where new graffiti cropped up, it could help police to better intervene. But convincing neighbors to make reports is a whole other matter, raising a host of questions about anonymity, police-community relations, and what some students described as a pervasive despair that the violence will never end.

“People will not report something if they think it will be a waste of time,” said 14-year-old Nina Henderson, a freshman at South Shore International College Preparatory High School, who said she has lost several cousins to gun violence. “We need to come up with solutions that will help everybody who lives in these crime situations.”

Data is a good place to start, she added. By the end of the day, Henderson and other students had brainstormed local problems and presented applications that would solve them—from an app that tracks crime rates near parks, to an analysis of pothole repairs and response times in neighborhoods based on income level.

“I think the students have gotten some valuable insight into what digging into the data is all about,” said Michael Page, director of recruitment in the Career and Technical Education program at South Shore International College Preparatory High School. “They’ve seen how important that is and how it can translate into their college careers.”

The Hackathon was sponsored by the Office of the Vice President for Research and for National Laboratories; Alumni Relations and Development; the Computation Institute; the Urban Center for Computation and Data; and the Computer Science Department. It was the partner event to the “Chicago: City of Big Data” panel discussion held on Nov. 20 at the Logan Center for the Arts Performance Hall.