Specific area of the brain linked to anxiety disorders in youth

Anxiety disorders are common in children and adolescents, affecting up to 25 percent of the youth population. Anxiety causes distress and functional impairment and, if left untreated, can result in bad grades, problems at home and increased rates of psychiatric disorders in adulthood.

These risks constitute a significant public health burden, and they underscore the importance of continued efforts to understand the cause and course of the disorder. 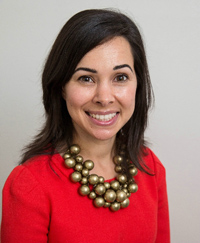 Tara Peris, assistant professor of psychiatry at the Semel Institute for Neuroscience and Human Behavior at UCLA. Image credit: University of California

Now researchers at UCLA have shown that teenagers with anxiety disorders show increased activity in a specific part of the brain, the medial prefrontal cortex, when they are interpreting a situation negatively. The results appear in the current online edition of the journal Biology of Mood and Anxiety Disorders.

For the study, 16 teenagers with anxiety disorders and 15 non-anxious teens underwent functional MRI while being shown pictures of people with a neutral look on their face. The faces were paired with either of two sentences: one that was viewed as neutral (“She is watching a presentation”) and one that might be viewed as more intimidating (“She is about to give a presentation”).

Teenagers without anxiety disorders were unaffected by the context when they interpreted the faces. But those with anxiety disorders often found neutral faces more threatening when they were presented in an “anxiety-provoking” situation — one in which they might feel judged by peers. This was not a great surprise. But when researchers measured brain activity in these situations, they found increased activity in the medial prefrontal cortex.

“We know that the medial prefrontal cortex plays a role in social and emotional processes, and it is an area of the brain that is still developing through childhood and adolescence, so it was a natural candidate for examination,” said co-author Tara Peris, an assistant professor of psychiatry at the Semel Institute for Neuroscience and Human Behavior at UCLA. “The role this area of the brain plays is of particular interest, then, given prior research that implicates it in inferring what another person is feeling.”

This is among the first studies, Peris said, aimed at understanding how anxious youths make sense of neutral stimuli and the conditions under which their brains might elicit heightened patterns of activation. Further research is needed to examine more definitively the role of this part of the brain in adolescent anxiety and the extent to which it may serve as a biomarker for illness.

Adriana Galván, a UCLA assistant professor of psychology in the UCLA College of Letters and Science, was co-author of the study.

Funding for the study was provided by a Brain and Behavior Research Foundation Young Investigator Award and by the National Institutes of Mental Health (K23 MH085058), the National Science Foundation (BCS 0963750) and UCLA institutional funds.