Every spring in the United States, bees pollinate crops valued at about $14 billion.

A Michigan State University professor and a team of scientists are using a five-year, $8.6 million grant from the United States Department of Agriculture to keep this winged workforce operating efficiently.

Almonds, strawberries, apples, cherries, blueberries, raspberries, watermelon, cucumbers and more depend on bees to help maximize yields. But with wild honey bee populations decimated by varroa mites and other threats, farmers are dependent on beekeepers to deliver managed colonies of honey bees during peak pollination to ensure their flowers are pollinated.

In some areas of North America, however, there aren’t enough bees to go around – wild or managed.

“In a typical blueberry field for example, there can be around 10 million flowers that need to be pollinated,” said Rufus Isaacs, MSU entomologist and project director. “Because of the combination of dense flowers and a short time window, growers need lots of bees to get the job done.” 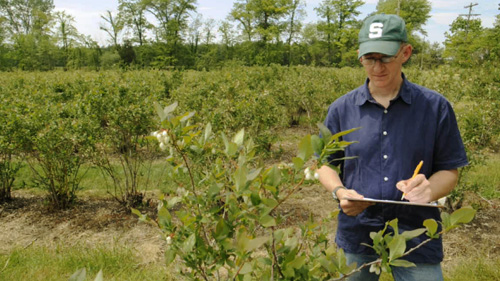 Currently, honey bees pollinate 80 to 90 percent of Michigan’s blueberries. Even though they shoulder the largest portion of the work, the long-term declines have some growers worried about the future ability to achieve crop pollination. Additionally, while they do have the high numbers, they are not the most efficient bees for pollinating blueberry. Some honey bees do forage for pollen, while others only gather nectar, which is taken back to the hive for honey production.

A more efficient flying farmhand is the larger bumble bee. By vibrating their wing muscles, they gather a dusty meal of pollen that sticks to their bellies and they carry that to the next flower. The bumble bees’ efficiency, and the fact that they are native to Michigan, has researchers interested in their potential.

“If we can learn how to increase wild bumble bee populations, they could be a great complementary workforce to the honey bees,” Rufus said.

Working with 12 other organizations in the U.S. and in Canada, the team is using the first year’s $1.7 million to gather baseline data. The Michigan team is in blueberry, cherry and apple farms counting the number and types of bees visiting crops, collecting specimens and measuring the effect of three levels of pollination.

Using electric toothbrushes, the blueberry team led by postdoctoral researcher Jason Gibbs collects pollen from other flowers, and adds it to the improved section. The toothbrush vibrations are similar to bumble bee gyrations. Once loosened, the pollen falls into a small dish, and is then painted on the open flowers in the pollen-added sections.

The team also is collecting data on many other native bees, such as mason, leafcutter, sweat, andrenid and mining bees, and learning about their contribution to pollination. In addition, scientists are investigating the best farm habitat suitable to build wild populations of pollinators.