In a new discovery reported in the Journal of Biological Chemistry, Brown University and Lifespan researchers show that in the brain cells of rats, obesity impedes the production of a hormone that curbs appetite and inspires calorie burning. The root cause appears to be a breakdown in the protein-processing mechanism of the cells. In the lab, the researchers showed they could fix the breakdown with drugs.

PROVIDENCE, R.I. [Brown University] — With obesity reaching epidemic levels in some parts of the world, scientists have only begun to understand why it is such a persistent condition. A study in the Journal of Biological Chemistry adds substantially to the story by reporting the discovery of a molecular chain of events in the brains of obese rats that undermined their ability to suppress appetite and to increase calorie burning.

It’s a vicious cycle, involving a breakdown in how brain cells process key proteins, that allows obesity to beget further obesity. But in a finding that might prove encouraging in the long term, the researchers at Brown University and Lifespan also found that they could intervene to break that cycle by fixing the core protein-processing problem.

Before the study, scientists knew that one mechanism in which obesity perpetuates itself was by causing resistance to leptin, a hormone that signals the brain about the status of fat in the body. But years ago senior author Eduardo A. Nillni, professor of medicine at Brown University and a researcher at Rhode Island Hospital, observed that after meals obese rats had a dearth of another key hormone — alpha-MSH — compared to rats of normal weight.

Alpha-MSH has two jobs in parts of the hypothalamus region of the brain. One is to suppress the activity of food-seeking brain cells. The second is to signal other brain cells to produce the hormone TRH, which prompts the thyroid gland to spur calorie burning activity in the body.

In the obese rats alpha-MSH was low, despite an abundance of leptin and despite normal levels of gene expression both for its biochemical precursor protein called pro-opiomelanocortin (POMC) and for a key enzyme called PC2 that processes POMC in brain cells. There had to be more to the story than just leptin, and it wasn’t a problem with expressing the needed genes. 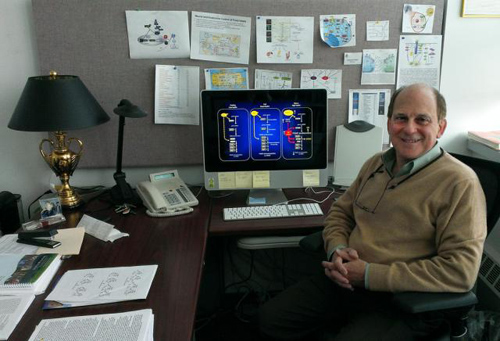 Eduardo A. Nillni. A complex set of neurochemical processes, newly unraveled, shows that obesity can sustain itself, impeding hormones that would curb appetite or increase the burn rate for calories. “This is so novel. Nobody ever looked at that.” Image credit: David Orenstein/Brown University

Nillni and his co-authors, including lead authors Isin Cakir and Nicole Cyr, conducted the new study to find out where the alpha-MSH deficit was coming from. Nillni said he suspected that the problem might lie in the brain cells’ mechanism for processing the POMC protein to make alpha-MSH.

To do their work, the team fed some rats a high-calorie diet and fed others a normal diet for 12 weeks. The overfed rats developed the condition of “diet-induced obesity.” The team then studied the hormone levels and brain cell physiology of the rats. They also tested their findings by experimenting with the biochemistry of key individual cells on the lab bench.

They found that in the obese rats, a key “machine” in the brain cells’ assembly line of protein-making, called the endoplasmic reticulum (ER), becomes stressed and overwhelmed. The overloaded ER apparently fumbles the proper handling of PC2, perhaps discarding it because it can’t be folded up properly. The PC2 levels they measured in obese rats, for example, were 53 percent lower than in normal rats. Alpha-MSH peptides were also barely more than half as abundant in obese rats as they were in healthy rats.

“In our study we showed that what actually prevents the production of more alpha-MSH peptide is that ER stress was decreasing the biosynthesis of POMC by affecting one key enzyme that is essential for the formation of alpha-MSH,” Nillni said. “This is so novel. Nobody ever looked at that.”

Novel as it was, the story — a stressed ER mishandles PC2, which leaves POMC unfolded, which impedes alpha-MSH production — needed experimental confirmation.

The team provided that confirmation in several ways: In obese rats they measured elevated levels of known markers of ER stress. They also purposely induced ER stress in cells using pharmacological agents and saw that both PC2 and Alpha-MSH levels dropped.

Similarly on the benchtop they took mouse neurons that produce PC2 and POMC and pretreated some with a similar chemical called PBA that prevents ER stress. They left others untreated. Then they induced ER stress in all the cells. Under that ER stress, those that had been pretreated with PBA produced about twice as much PC2 as those that had not.

Nillni cautioned that although his team found ways to restore PC2 and alpha-MSH by treating ER stress in living rats and individual cells, the agents used in the study are not readily applicable as medicines for treating obesity in humans. There could well be unknown and unwanted side effects, for example, and TUDCA is not approved for human use by the U.S. Food and Drug Administration.

But by laying out the exact mechanism responsible for why the brains of the obese rats failed to curb appetite or spur greater calorie burning, Nillni said, the study points drug makers to several opportunities where they can intervene to break this new, vicious cycle that helps obesity to perpetuate itself.

“Understanding the central control of energy-regulating neuropeptides during diet-induced obesity is important for the identification of therapeutic targets to prevent and or mitigate obesity pathology,” the authors wrote.

In addition to Nillni, Cakir and Cyr, other authors of the paper are Mario Perello, Bogdan Litvinov, Amparo Romero, and Ronald Stuart.

The National Institute of Diabetes and Digestive and Kidney Diseases supported the research with grant RO1 DK085916-01.