Acidifying oceans could dramatically impact the world’s squid species, according to a new study led by Woods Hole Oceanographic Institution (WHOI) researchers and just published online in the journal PLOS ONE. Because squid are both ecologically and commercially important, that impact may have far-reaching effects on the ocean environment and coastal economies, the researchers report.

“Squid are at the center of the ocean ecosystem—nearly all animals are eating or eaten by squid,” says WHOI biologist T. Aran Mooney, a co-author of the study. “So if anything happens to these guys, it has repercussions down the food chain and up the food chain.”

Research suggests that ocean acidification and its repercussions are the new norm. The world’s oceans have been steadily acidifying for the past hundred and fifty years, fueled by rising levels of carbon dioxide (CO2) in the atmosphere. Seawater absorbs some of this CO2,turning it into carbonic acid and other chemical byproducts that lower the pH of the water and make it more acidic. As CO2 levels continue to rise, the ocean’s acidity is projected to rise too, potentially affecting ocean-dwelling species in ways that researchers are still working to understand. 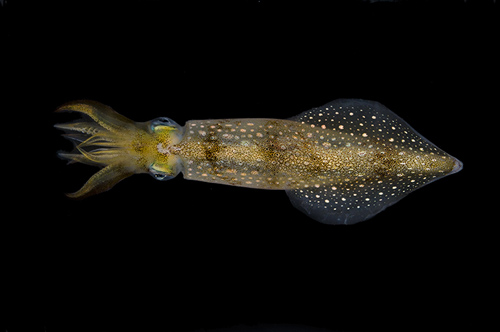 Mooney and his colleagues—lead author Max Kaplan, then an undergraduate student from the University of St. Andrews in the U.K. and now a WHOI graduate student, and WHOI scientists Daniel McCorkle and Anne Cohen—decided to study the impact of acidifying seawater on squid. Over the summer of 2011, Mooney and Kaplan gathered male and female Atlantic longfin squid (Loligo pealeii) from the waters of Vineyard Sound and transported them to a holding tank in the WHOI Environmental Systems Laboratory. When these squid mated and the females laid their egg capsules—each of which can contain 200 to 300 fertilized eggs—the researchers transferred some of the capsules to one of two smaller tanks filled with Vineyard Sound seawater.

These two smaller tanks represented two environments: today’s ocean, and the more acidic oceans of the future. One was continuously exposed to air pumped in from outside, to simulate the ocean’s current interaction with the atmosphere. The other received air enriched with higher CO2 levels that made the seawater about three times more acidic, a level of acidity that models predict will be widespread a hundred years from now.

The researchers watched as the eggs hatched and the squid began to develop in each of the two tanks, and measured their time to hatching, body length and other parameters as they grew.

“Amazingly, we found effects or changes in all those parameters,” Mooney says. “Animals raised in high CO2 took longer to develop, which is a big deal when you’re basically this egg mass on the bottom of the ocean and fish can just pop along and eat you.” 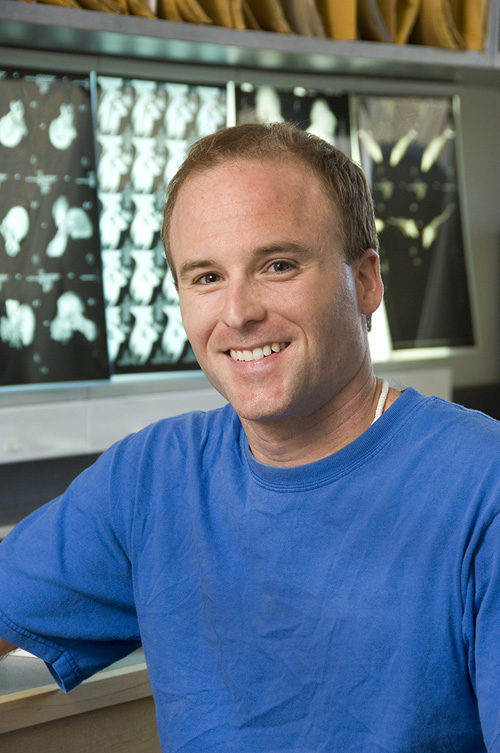 “Squid are at the center of the ocean ecosystem—nearly all animals are eating or eaten by squid,” says WHOI biologist T. Aran Mooney, a co-author of the study. Image credit: Tom Kleindinst, Woods Hole Oceanographic Institution

Squid reared in more acidic seawater were also 5 percent smaller on average, the team reports, and they developed smaller and misshapen statoliths, which are organs made of carbonate crystals that enable the squid to orient themselves while swimming. Earlier work has shown that squid with malformed statoliths may swim in circles or swim poorly, which leaves them likely to die when they can’t escape predators or catch their prey.

“That means the animal probably had a challenging time laying down those crystals,” he says. “It doesn’t look like they can do that in a very orderly or standard fashion in high CO2 because the acidified conditions keep dissolving the calcium carbonate as the animals are trying to lay it down.”

The results suggest that squid are vulnerable to the acidic conditions that higher CO2 levels create, and may face greater challenges to survival as the ocean acidifies than researchers anticipated.

“The fact that we found an impact in everything we measured was pretty astounding,” Mooney says. “That means that squid, this keystone species, might be really impacted by the environment that we’re changing, and that’s going to have ramifications down the line.” 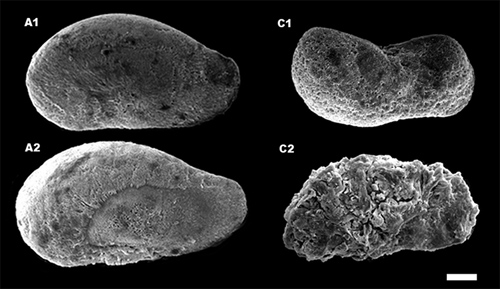 Squid raised in normal (left) and more acidic conditions (right) developed distinctly different statoliths, which are organs that help squid balance and orient themselves as they swim. Among squid reared in more acidic conditions, statoliths were smaller, more porous and degraded, which would likely result in less-than-ideal movement and a lower chance of survival in the wild, Mooney says. Image credit: Max Kaplan, Woods Hole Oceanographic Institution

Those ramifications could include significant changes to the ocean ecosystem, where squid play a vital role, as well as economic losses. Squid are a key food source for many commercially important fish, including tuna and hake, and are themselves a valuable commodity: In 2011 alone, U.S. fishermen harvested more than 300 million pounds of squid with a value of more than $100 million.

Mooney and his colleagues are planning additional studies to better understand how squid may fare in changing ocean conditions. Future experiments may look at a range of different levels of acidity, to determine which levels squid can and can’t tolerate, and at the effects of temperature changes, as seawater is also expected to warm in the coming century. The researchers also hope to observe and measure behavioral differences in squid reared in more acidic seawater to form a clearer picture of how the animals’ lives may shift as the ocean around them changes.

The research was funded by a WHOI Student Summer Fellowship and WHOI/MIT Joint Program, the Penzance Endowed Fund, the John E. and Anne W. Sawyer Endowed Fund and by grants from the National Science Foundation and the NOAA Sea Grant program.