CAMBRIDGE, MA – 24 Jun 2013: The search for more versatile and less expensive materials for solar energy received a boost today as Harvard launched a free database that catalogues the suitability of 2.3 million organic, carbon compounds for converting sunlight into electricity.

Harvard’s Clean Energy project — which screened the molecules using World Community Grid, an IBM-managed virtual supercomputer that harnesses the surplus computer power donated by volunteers — is believed to be the most extensive investigation of quantum chemicals ever performed.

Scientists can now use Harvard’s resource — www.molecularspace.org — to continue investigating the most promising candidates.  It can be used to help advance the development of organic semiconductors, new materials, and ultimately, electricity-generating devices such as solar cells. 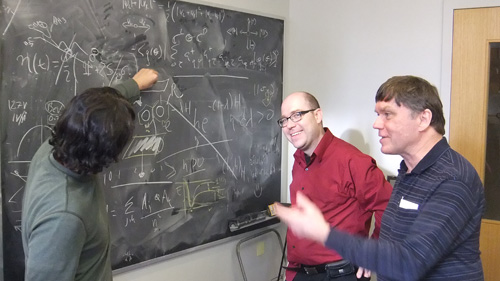 Approximately 1,000 of the molecular structures that were characterized in Harvard’s research show a potential to convert 11% or more of captured sunlight into electricity, while 35,000 may achieve an efficiency of 10% or more.  Most organic cells explored to date only convert 4% to 5% of sunlight into electricity. While solar energy materials that use silicon provide about 15% efficiency, they are more expensive to produce.

Organic solar cells offer more possibilities than those made with traditional materials like silicon.  For example, carbon-based materials can be as cheaply manufactured on a massive scale with the same technology that currently produces plastic bags — making them useful to remote and impoverished populations.  Versions of organic solar cells could be coated, painted, or sprayed on roofs, windows and walls, and can be thin and light enough to be applied to ultraportable devices.

The news was welcomed by the White House Office of Science and Technology Policy, which has previously featured the Harvard Clean Energy Project and IBM World Community Grid in its Materials Genome Initiative (MGI).  The MGI was launched by President Obama in June 2011 as part of a broader effort to create new jobs, solve societal challenges, and enhance America’s global competitiveness by bolstering the U.S. advanced manufacturing enterprise and accelerating, in particular, the field of materials science. The Initiative seeks to cut in half the time it takes to get from the discovery of new materials to their commercialization, while reducing costs — in part through greater sharing of basic materials data and analyses through collaborative processes such as the one engaged in by Harvard and IBM.

“Whether we’re talking about high-efficiency, high-temperature jet engines, solar cells that generate electricity as inexpensively as coal, wind turbines that use magnets free of rare-earth elements, or the biocompatibility of replacement joints and implants, materials matter,” said Dr. Cyrus Wadia, Assistant Director for Clean Energy and Materials R&D in the White House Office of Science and Technology Policy. “The Materials Genome Initiative is catalyzing important collaborative advances from industry, academia, and the Federal Government, so that together we can secure the nation’s future as a leader in this critical technological domain.” 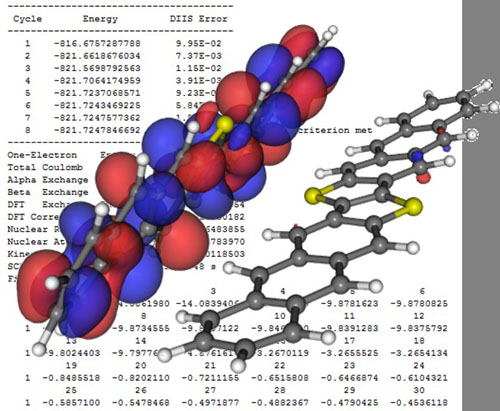 A Bright Idea. IBM’s World Community Grid made it possible for the Harvard Clean Energy Project to conduct the most extensive investigation of quantum chemicals ever performed. This has yielded information on millions of new organic compounds, some of which can one day be developed into low cost, highly efficient solar cells. Harvard is open sourcing the information it compiled on these compounds, which scientists are invited to continue investigating. Image courtesy of Harvard Clean Energy Project.

Opening Harvard’s CEPDB database to the public and scientific community reflects the collaborative spirit with which the research has been performed — with the surplus computing power donated by organizations and individuals to researchers through World Community Grid.  To date, World Community Grid has provided the Clean Energy Project with the equivalent of a single PC performing scientific calculations for 17,000 years.

“We are glad to be releasing the data computed by the volunteers from IBM’s World Community Grid to the public. Our first analysis of the data has been submitted for publication, but now with all the data readily available online in MolecularSpace.org, many others around the world can further analyze it to accelerate discovery,” said Alán Aspuru-Guzik, Professor of Chemistry at Harvard University and leader of the Clean Energy Project, who blogged about the project on CitizenIBM.

The Clean Energy Project — partially funded by the US Department of Energy — is the latest in a series of projects made possible and publicly available by World Community Grid.  For instance, the Human Proteome Folding project run by New York University’s Center for Comparative Functional Genomics published the structure predictions for many thousands of proteins, which can help scientists understand their functions and potentially lead to cures for diseases. 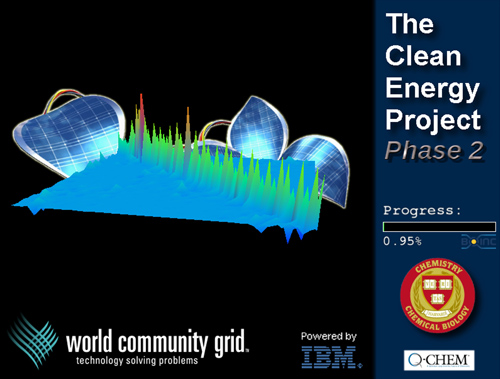 A Bright Idea. IBM’s World Community Grid made it possible for the Harvard Clean Energy Project to conduct the most extensive investigation of quantum chemicals ever performed. This has yielded information on millions of new organic compounds, some of which can one day be developed into low cost, highly efficient solar cells. Harvard is open sourcing the information it compiled on these compounds, which scientists are invited to continue investigating. Image courtesy of Harvard Clean Energy Project. Image credit: IBM

World Community Grid, created and managed by IBM, provides computing power to scientists by harnessing the unused cycle time of volunteers’ computers.  Participants get involved by downloading software to their Windows, Mac or Linux computer that runs when they take breaks or work on lightweight computer tasks.  The software receives, completes, and returns small computational assignments to scientists.

The resource is welcomed by researchers who don’t have the funds or dedicated access to powerful supercomputers that can accelerate their simulations and experiments.   It has been used to facilitate research into clean energy, clean water and healthy foodstuffs, as well as cures for cancer, AIDS, malaria and other diseases.

More than 2.3 million computers used by over 600,000 people and institutions from 80 countries have contributed power for projects on World Community Grid over the last nine years.  The result is one of the fastest virtual supercomputers on the planet, advancing scientific work by hundreds of years.  By 2013, at least 22 projects were up and running or had been completed as part of World Community Grid. Since its inception, the project has provided research scientists with the equivalent of more than 750,000 years of computing at no cost to them.

World Community Grid runs on the Berkeley Open Infrastructure for Network Computing (BOINC) platform, developed at the University of California, Berkeley, and supported by the National Science Foundation.