The potential of gene therapy to boost heart muscle function was explored in a recent University of Washington animal study. The findings suggest that it might be possible to use this approach to treat patients whose hearts have been weakened by heart attacks and other heart conditions.

Michael Regnier, UW professor and vice chair of bioengineering, Charles Murry, director of the Center for Cardiovascular Biology and co-director of the Institute for Stem Cell and Regenerative Medicine, and Sarah Nowakowski, a UW graduate student in bioengineering, led the study. The findings appeared online March 25 in the Proceedings of the National Academy of Sciences. 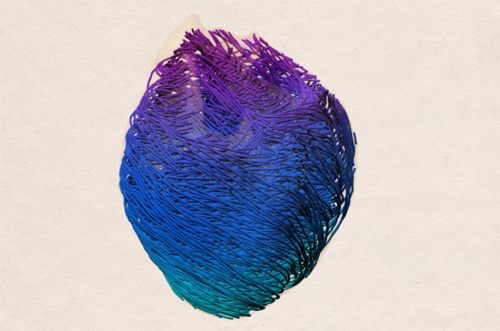 Normally, muscle contraction is powered by a molecule, the nucleotide called adenosine-5′-triphosphate, or ATP. Other naturally occurring nucleotides can also power muscle contraction, but in most cases they have proven to be less effective than ATP.

In an earlier study of isolated muscle, however, Regnier, Murry and their colleagues had found that one naturally occurring molecule, called 2 deoxy-ATP, or dATP, was actually more effective than ATP in powering muscle contraction.  dATP  increased both the speed and force of the contraction, at least over the short-term. 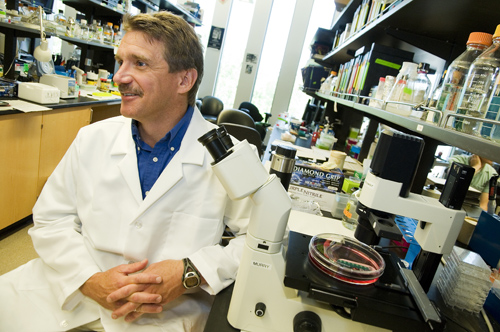 In the new study, the researchers wanted to see whether this effect could be sustained. To do this, they used genetic engineering to create a strain of mice whose cells produced higher-than-normal levels of an enzyme called ribonucleotide reductase. This enzyme converts the precursor of  ATP, adenosine-5’-diphosphate or ADP, to dADP, which, in turn, is rapidly converted to dATP.

“This fundamental discovery, that dATP can act as a ‘super-fuel’ for the contractile machinery of the heart, or myofilaments, opens up the possibility to treat a variety of heart failure conditions,” Regnier, an established investigator of the American Heart Association, said. “An exciting aspect of this study and our ongoing work is that a relatively small increase in dATP in the heart cells has a big effect on heart performance.” 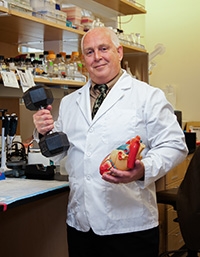 Dr. Michael Regnier holds a model of a heart in one hand, and a hand weight in another. Image credit: University of Washington

The researchers found that increased production of the enzyme ribonucleotide reductase increased the concentration of dATP within heart cells approximately tenfold. Even though this level was still less than one to two percent of the cell’s total pool of ATP, the increase led to a sustained improvement in heart muscle function. The genetically engineered hearts contracted more quickly and with greater force.

“It looks as though we may have stumbled on an important pathway that nature uses to regulate heart contractility,” Murry added. “The same pathway that heart cells use to make the building blocks for DNA during embryonic growth makes dATP to supercharge contraction when the adult heart is mechanically stressed.”

Importantly, the elevated dATP effect was achieved without imposing additional metabolic demands on the cells. That observation suggests that the modification would not harm the cell’s functioning over the long-term.

The study’s findings, the authors write, suggest that treatments that elevate dATP levels in heart cells may prove to be an effective treatment for heart failure.

The work was supported by grants from the National Institutes of Health and the National Science Foundation Graduate Research Fellowship Program.