The next generation of computers promises far greater power and faster processing speeds than today’s silicon-based based machines. These “quantum computers” — so called because they would harness the unique quantum mechanical properties of atomic particles — could draw their computing power from a collection of super-cooled molecules.

But chilling molecules to a fraction of a degree above absolute zero, the temperature at which they can be manipulated to store and transmit data, has proven to be a difficult challenge for scientists.

Now, UCLA physicists have pioneered a new technique that combines two traditional atomic cooling technologies and brings normally springy molecules to a frozen standstill. Their research is published March 28 in the journal Nature.

“Scientists have been trying to cool molecules for a decade and have succeeded with only a few special molecules,” said Eric Hudson, a UCLA assistant professor of physics and the paper’s senior author. “Our technique is a completely different approach to the problem — it is a lot easier to implement than the other techniques and should work with hundreds of different molecules.” 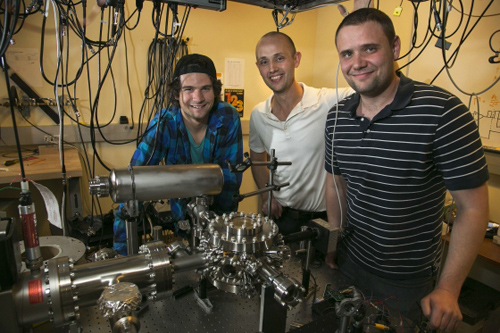 Previous attempts to create ultracold molecules were only effective with one or two specific kinds. Creating a method that can be used with many different molecules would be a major step forward because it is difficult to say which materials might be used in quantum computers or other future applications, Hudson said.

By immersing charged barium chloride molecules in an ultracold cloud of calcium atoms, Hudson and his colleagues are able to prevent most of the molecules from vibrating and rotating. Halting the molecules is a necessary hurdle to overcome before they can be used to store information like a traditional computer does.

“The goal is to build a computer that doesn’t work with zeros and ones, but with quantum mechanical objects,” Hudson said. “A quantum computer could crack any code created by a classical computer and transmit information perfectly securely.”

Hudson’s experiment makes molecules extremely cold under highly controlled conditions to reveal the quantum mechanical properties that are hidden under normal circumstances. At room temperature, molecules rocket around, bouncing into each other and exchanging energy. Any information a scientist attempted to store in such a chaotic system would quickly become gibberish.

“We isolate these molecular systems in a vacuum, effectively levitating them in the middle of nothing,” Hudson said. “This removes them from the rest of the world that wants to make them classical.”

The quantum mechanical world of subatomic particles deviates from the classical world that we observe with the naked eye because according to quantum mechanics, electrons can only exist at specific energy levels. In a quantum computer made of a collection of single atoms, information might be stored by boosting some atomic electrons to higher energy levels while leaving others at lower energy states. However, these atomic energy states are not stable enough to reliably preserve data, Hudson said.

“One of the challenges with atoms is that their energy states are very easily influenced by the outside world,” Hudson said. “You make this beautiful quantum state, but then the outside world tries to destroy that information.”

Despite applications for quantum computing and other industries, cooling molecules to extremely low temperatures has proved a challenge. Even the simplest molecule composed of only two atoms is a far more complex system than a single atom. Each molecule vibrates and rotates like a miniature whirling slinky, and all of that movement must be stilled so that the molecule can lose energy and cool down.

To solve the ultracold molecule conundrum, Hudson and his group first created a floating cloud of calcium atoms corralled by incoming laser beams from all directions. This magneto-optical trap keeps the atoms stationary as it cools them to nearly absolute zero. They then use specialized rods with high, oscillating voltages as part of an ion trap to confine a cloud of positively-charged barium chloride molecules within the ultracold ball of calcium atoms to complete the cooling process.

For the vibrating, energetic molecules to lose heat, they must spend a significant amount of time in contact with the surrounding ultracold atom cloud. Hudson and his colleagues used barium chloride ions, molecules missing one electron, because charged molecules are easier to trap and cool than their neutral counterparts. The use of molecular ions is an essential innovation because previous efforts have demonstrated that neutral molecules ricochet off ultracold atoms without sufficient heat transfer.

“When a molecular ion and a neutral atom get close together they get in tight and bang off each other a bunch before the ion goes away,” Hudson said. “When they collide like that it is very easy for the energy in one to go to the other.”

While magneto-optical and ion traps are not new to the world of molecular physics, Hudson and his colleagues became the first group to combine these methods to create a cloud of ultracold molecules. This paper is the result of over four years of work spent designing, building, and testing their experiment.

“These two different technologies earned Nobel prizes for the scientists who developed them, but there wasn’t really a body of knowledge about how to put these two procedures together,” Hudson said.

The research is funded by the Army Research Office and the National Science Foundation.