In last great age of warmth, CO2 at work — but hardly alone

Warming patterns during Earth’s last period of prolonged global warmth differed dramatically from modern temperature patterns, according to new research by a Yale University scientist and colleagues. Cloud feedbacks, ocean mixing, or other dynamic factors must have played a greater role in Pliocene warming than commonly recognized, the scientists argue, and these must be accounted for in order to make meaningful predictions about Earth’s future climate.

In a paper published April 4 in the journal Nature, Yale climate scientist Alexey Fedorov and colleagues compile records of sea surface temperatures going back five million years, to the early Pliocene. These records reveal a world with fairly uniform warm temperatures in the whole of the Tropics prior to 4 million years ago — a significant scenario that typical climate model simulations fail to show.

“If we want to understand our future climate, we have to be able to understand climate of the past,” said Fedorov, a professor of oceanic and atmospheric sciences at Yale and one of the paper’s principal authors. “The Pliocene epoch attracts particular attention because of similar CO2 levels to what we have had over the last few decades, but its climate was markedly different in several important ways. Still, if we’re able to simulate the early Pliocene climate, we will be more confident in our ability to predict future climate change.”

Warm and temperate, the Pliocene is widely viewed as a potential analog for a future hot Earth. Using chemical fingerprints in ocean sediments to estimate sea surface temperatures, the researchers describe long-term climate trends from the early Pliocene to the present, comparing and contrasting that ancient climate with today’s.

The Pliocene Earth had the same maximum temperature as now and a similar concentration of atmospheric CO2, but the waters in the Tropics (off the coast of Peru, for example) were much warmer than now, resembling modern El Niño conditions. (There was little or no east-west temperature variation along the equator.) Temperature differences between high latitudes and the Tropics were also much smaller. 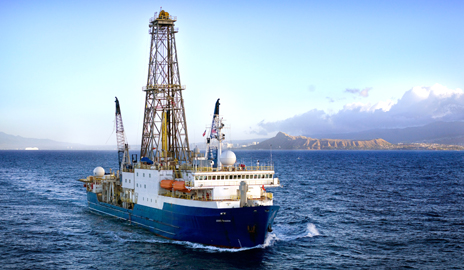 Records of sea surface temperatures going back five million years reveal a world with fairly uniform warm temperatures in the Tropics prior to four million years ago. The JOIDES Resolution, a scientific drilling ship, is the primary way scientists get samples from past geologic periods. (Photo by William Crawford, IODP-USIO).

Kira Lawrence of Lafayette College, also a principal author, said: “While existing data suggest that the climate forcing [factors controlling climate] during the Pliocene was marginally different, the broad temperature patterns during the Pliocene were different in a fundamental way. As a community, we have been focused on changes in the global mean temperature; what our study demonstrates is the potential for climate patterns to be markedly different in a world that is not that much warmer than today’s.”

Previous attempts to explain Pliocene climate have emphasized tectonic changes in Indonesia and Central America. But accounting for this in climate models still results in a conflict with actual temperature patterns.

Several dynamic factors have been proposed to explain the warm temperature patterns during the Pliocene. These include ocean mixing in subtropical waters (perhaps due to widespread hurricanes) and diminished cloud reflectivity (perhaps due to a different aerosol composition), which would tend to warm the ocean. When combined in models with higher levels of CO2, these help replicate conditions of the warm Pliocene Earth. But so far these factors have not been included in climate models used to make future projections. A better understanding of what caused the Pliocene climate, with its nearly uniform tropical ocean temperatures, will increase confidence in the fidelity of the models, researchers said.

Said co-author Chris Brierley, a former Yale postdoctoral researcher now at University College London, “I’m worried that we can’t discount a possible future that has a vast pool of warm water covering the tropics, and the nasty changes in the atmospheric circulation and rainfall changes that would go along with that.”

The paper is titled “Patterns and mechanisms of early Pliocene warmth.”