Berkeley Lab-led team explores a way to create biofuels, minus the photosynthesis

Is there a new path to biofuels hiding in a handful of dirt? Lawrence Berkeley National Laboratory (Berkeley Lab) biologist Steve Singer leads a group that wants to find out. They’re exploring whether a common soil bacterium can be engineered to produce liquid transportation fuels much more efficiently than the ways in which advanced biofuels are made today.

The scientists are working with a bacterium called Ralstonia eutropha. It naturally uses hydrogen as an energy source to convert CO2 into various organic compounds.

The group hopes to capitalize on the bacteria’s capabilities and tweak it to produce advanced biofuels that are drop-in replacements for diesel and jet fuel. The process would be powered only by hydrogen and electricity from renewable sources such as solar or wind.

The goal is a biofuel—or electrofuel, as this new approach is called—that doesn’t require photosynthesis. 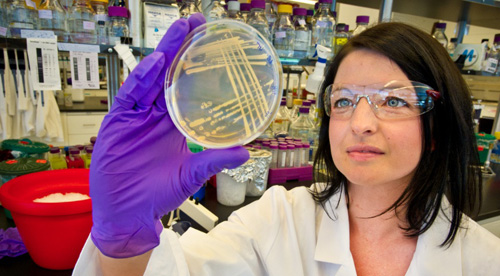 The road from petri dish to fuel pump starts here. Berkeley Lab's Jana Mueller is part of a team of scientists working to take a common soil bacterium and use it to create an efficient way to produce diesel and jet fuel. Image credit: Berkeley Lab

Why is this important? Most methods used to produce advanced biofuels, such as from biomass and algae, rely on photosynthesis. But it turns out that photosynthesis isn’t very efficient when it comes to making biofuel. Energy is lost as photons from the sun are converted to stored chemical energy in a plant, which is then converted to a fuel.

“We want to bypass photosynthesis by using a microbe that uses hydrogen and electricity to convert CO2 into a fuel,” he adds.

Widespread use of electrofuels would also reduce demands for land, water, and fertilizer that are traditionally required to produce biofuels.

That pretty much describes electrofuels. ARPA-E estimates the technology has the potential to be ten times more efficient than current biofuel production methods. But electrofuels are currently confined to lab-scale tests. A lot of obstacles must be overcome before you’ll see it at the pump.

Fortunately, research is underway. The Berkeley Lab project is one of thirteen electrofuel projects sponsored by ARPA-E. And earlier this year, ARPA-E issued a request for information focused on the commercialization of the technology. 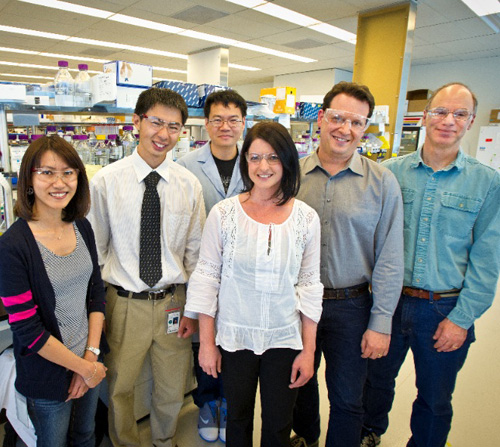 Team electrofuel: It takes a a lot of talent to determine what it takes to transform a soil microbe into a biofuel-making factory. From left, Jean Yeh, Peter Su, Changhao Bi, Jana Mueller, Steve Singer, and Harry Beller. Image credit: Berkeley Lab

Singer’s group includes scientists from Virginia-based Logos Technologies and the University of California at Berkeley. The project’s co-principal investigators are Harry Beller, Swapnil Chhabra, and Nathan Hillson, who are also with Berkeley Lab and JBEI; Chris Chang, a UC Berkeley chemist and a faculty scientist with Berkeley Lab’s Chemical Sciences Division; and Dan MacEachran of Logos Technologies.

The scientists chose to work with R. eutropha because the bacterium is well understood and it’s already used industrially to make bioplastics.

They’re creating engineered strains of the bacterium at JBEI, all aimed at improving its ability to produce hydrocarbons. This work involves re-routing metabolic pathways in the bacteria. It also involves adding pathways from other microorganisms, such as a pathway engineered in Escherichia coli to produce medium-chain methyl ketones, which are naturally occurring compounds that have cetane numbers similar to those of typical diesel fuel. 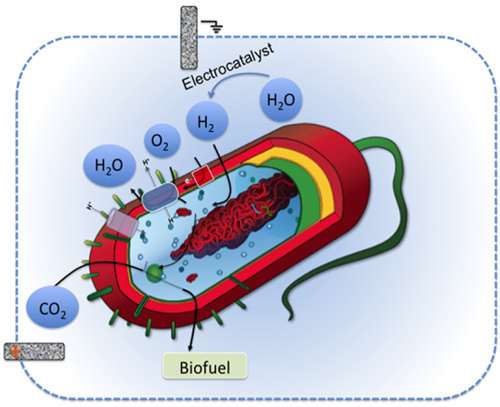 In both approaches, here's how the system would work: Electricity splits water into oxygen and hydrogen. The bacterium uses the hydrogen as an energy source to take in carbon dioxide and convert it to a biofuel, which it then emits. Image credit: Berkeley Lab

In the first approach, Logos Technologies is developing a two-liter bioelectrochemical reactor, which is a conventional fermentation vessel fitted with electrodes. The vessel starts with a mixture of bacteria, CO2, and water. Electricity splits the water into oxygen and hydrogen. The bacteria then use energy from the hydrogen to wrest carbon from CO2 and convert it to hydrocarbons, which migrate to the water’s surface. The scientists hope to skim the first batch of biofuel from the bioreactor in about one year.

In the second approach, the scientists want to transform the bacteria into self-reliant, biofuel-making machines. With help from Chris Chang, they’re developing ways to tether electrocatalysts to the bacteria’s surface. These catalysts use electricity to generate hydrogen in the presence of water.

The idea is to give the bacteria the ability to produce much of their own energy source. If the approach works, the only ingredients the bacteria will need to produce biofuel would be CO2, electricity, and water.

The scientists are now developing ways to attach these catalysts to electrodes and to the surface of the bacteria.

“We’re at the proof-of-principle stage in many ways with this research, but the concept has a lot of potential, so we’re eager to see where we can take this,” says Singer.