Handful of Heavyweight Trees Per Acre Are Forest Champs

Big trees three or more feet in diameter accounted for nearly half the biomass measured at a Yosemite National Park site, yet represented only 1 percent of the trees growing there.

This means just a few towering white fir, sugar pine and incense cedars per acre at the Yosemite site are disproportionately responsible for photosynthesis, converting carbon dioxide into plant tissue and sequestering that carbon in the forest, sometimes for centuries, according to James Lutz, a University of Washington research scientist in environmental and forest sciences. He’s lead author of a paper on the largest quantitative study yet of the importance of big trees in temperate forests being published online May 2 on PLoS ONE. 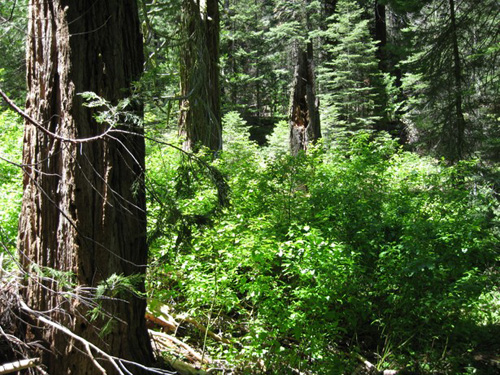 A handful of large-diameter trees per acre, such as these incense cedars, together with remains of big trees like the three-foot-wide white fir snag and downed debris account for half the forest biomass at a Yosemite National park study site. Image credit: J Lutz/U of Washington

In 2009, scientists including Lutz reported that the density of large-diameter trees declined nearly 25 percent between the 1930s and 1990s in Yosemite National Park, even though the area was never logged. Scientists including co-author Andrew Larson of the University of Montana, also have found notable numbers of large trees dying in similar areas across the West.

Because of this, scientists have been keen to study a plot large enough to detect forest ecosystem changes involving large trees, including the effects of climate variability and change, possible culprits in the declines, Lutz said.

The new 63-acre study site in the western part of Yosemite National Park is one of the largest, fully-mapped plots in the world and the largest old-growth plot in North America. The tally of what’s there, including the counting and tagging of 34,500 live trees, was done by citizen scientists, mainly undergraduate college students, led by Lutz, Larson, Mark Swanson of Washington State University and James Freund of the UW.

Included was all above-ground biomass such as live trees, snags, downed woody debris, litter and what’s called duff, the decaying plant matter on the ground under trees. Even when big trees die, they continue to dominate biomass in different ways. For example, 12 percent of standing snags were the remains of large-diameter trees, but still accounted for 60 percent of the total biomass of snags.

Live and dead biomass totaled 280 tons per acre (652 metric tons per hectare), a figure unmatched by any other forest in the Smithsonian Center for Tropical Forest Science network, a global network of 42 tropical and temperate forest plots including the one in Yosemite. 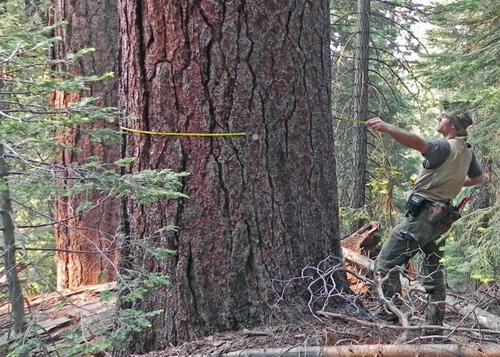 Trees in the western U.S. with trunks more than three feet across are typically at least 200 years old. Many forests that were heavily harvested in the 19th and 20th centuries, or those that are used as commercial forest lands today, don’t generally have large-diameter trees, snags or large wood on the ground.

One implication of the research is that land managers may want to pay more attention to existing big trees, the co-authors said. Last year in the Yosemite National Park, for example, managers planning to set fires to clear out overgrown brush and densely packed small trees first used data from the study plot to figure out how many large trees to protect.

“Before the fires were started, crews raked around some of the large trees so debris wouldn’t just sit and burn at the base of the tree and kill the cambium, the tissue under the bark that sustains trees,” Lutz said.

In some younger forests that lack big trees, citizens and land managers might want to consider fostering the growth of a few big-trunked trees, Lutz said.

Another finding from the new work is that forest models based either on scaling theory or competition theory, which are useful for younger, more uniform forests, fail to capture how and where large trees occur in forests.

“These trees started growing in the Little Ice Age,” Lutz said. “Current models can’t fully capture the hundreds of years of dynamic processes that have shaped them during their lifetimes.”

The research was funded by the Smithsonian Center for Tropical Forest Science.