As a stiff breeze sweeps across Staring Lake in suburban Minneapolis, a five-foot, antenna-sporting robotic boat plies the water in a back-and-forth pattern.

Today Isler, an associate professor of computer science at the University of Minnesota, and graduate students Pratap Tokekar and Josh Vander Hook have come to the lake to test the newer of the boats. Their mission: developing a new technology to track invasive fish.

The lake contains common carp fitted with tags that emit radio signals, each with a frequency unique to a particular fish. Eventually, both boats will be outfitted with antennas that pick up the signals. 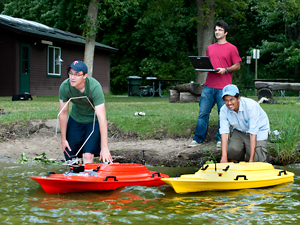 The idea behind the research is that radiotagged carp in a lake can give away a school’s position when they aggregate with other carp. Then fishermen can haul out hundreds to thousands of these “trash” fish, which are responsible for ruining many lakes by uprooting native plants.

Common carp can comprise the majority of the weight of fish in many lakes. Currently, they are the state’s most damaging invasive fish; however, the Asian carp now poses a rising threat and one day could conceivably be exploited using this approach.

“We have a search strategy to establish contact with the fish,” says Isler, a specialist in robotic sensing systems. Depending on factors like lake depth and the tags’ batteries, “the range can be from a few meters to hundreds of meters.”

The older of the two boats can already find fish, showing that the technology has potential for detecting and mapping tagged fish in a lake. When the two-boat system is mature, it will use triangulation to pinpoint targets in a coordinated fashion.

“This opens possibilities for new science—if we draw trajectories, biologists could study fish behavior,” Isler explains. “Also, such data can make it possible to study under which conditions carp move and aggregate. Our goal is to provide yearlong monitoring of fish.” (In winter, a wheeled robot will track the fish from the ice surface.)

Isler and his team work closely with Peter Sorensen, a professor in the Department of Fisheries, Wildlife and Conservation Biology, and his research team, who perform the tagging and test the system by planting tags in lakes. Sorensen’s group studies carp movement in and between lakes to get an idea of the scope of the problems Isler’s group will have to address. They also study this species’ effects on water quality, its physiology and ecology, and how it can be controlled with environmentally friendly techniques.

“We’re interested in questions such as when, where, and why common and Asian carp move and aggregate so we can predict their movements,” Sorensen says.

The boats will eventually run on solar power and thus be able to operate for long stretches. To utilize solar power, Isler’s group is studying how to autonomously build maps that show how well the solar array performs in various places.

“We have a sensor that measures real-time power from the array,” says computer science graduate student Patrick Plonski. “It associates these measurements of power with GPS position to build a map. Then we ask the system, ‘We want to go from here to here in such and such a time, what’s the best way to do it?’ Then the robot automatically does. For example, if you have shadows in your straight path from A to B, you might want to take a more circuitous route [to save battery power].”

“This becomes a subroutine for search and tracking algorithms,” Isler adds.

The team is now perfecting the coordination between the two boats. They must program the system to decide, given two boats and moving targets, which boat gets which task.

“We hope to test with two or more boats next summer at the Malheur National Wildlife Refuge in eastern Oregon,” Isler says. That’s a 100,000-acre lake, with connections to other lakes, so it will pose different challenges from Staring Lake.

But the algorithms Isler’s team is creating have implications beyond rounding up invasive fish.

“There’s no reason this can’t be used for search and rescue, detecting forest fires, emergency response, or all kinds of other things,” Isler says. “For example, if you had these around the planet, connected to the Internet, you could measure environmental parameters such as temperature with very high resolution.

“A lot of work that goes into these projects goes unnoticed. Sometimes, on a winter day, the group members have to go [out on a lake] and perform experiments. I want to acknowledge their hard work. Our work combines excellent theoretical research with field experiments. This is something I am proud of.”

This story is based on work supported by the National Science Foundation under Grant No. 1111638.