Hyenas that Think Outside the Box Solve Problems Faster

The study, published in the current issue of the Proceedings of the Royal Society B, presented steel puzzle boxes with raw meat inside to wild spotted hyenas in Kenya. To get the meat, the hyenas had to slide open a bolt latch. Even though most of the animals had many opportunities to open the box, only nine out of 62 hyenas succeeded. The successful hyenas tried more solutions, including biting, flipping or pushing the box, than the ones that failed, said MSU zoology graduate student Sarah Benson-Amram.

Another requirement for success was not being afraid to approach new things. The wild hyenas had never seen a steel puzzle box before. And those hyenas that quickly contacted the box when they first saw it were more successful solving the problem than those hyenas that were slower to approach it. Although contacting unknown objects can be quite dangerous for wild animals, this research shows that risk-taking also has some benefits.

Surprisingly, one trait that did not necessarily lead to victory was persistence, said Benson-Amram.

“While those who gave up quickly were more likely to fail, some hyenas that spent more time with the puzzle box appeared to get stuck in a rut and would often try the same solutions over and over again,” she said. 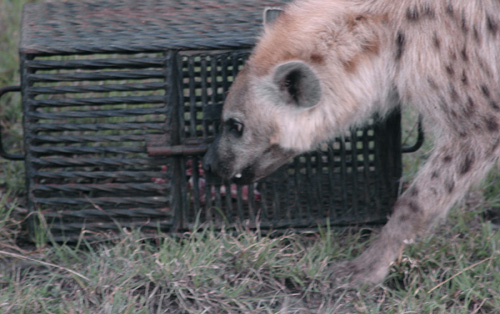 MSU researchers show that hyenas must think out of the box to solve puzzles. Photo courtesy of MSU.

Like humans and other primates, hyenas have relatively large brains, said Kay Holekamp, MSU zoologist and co-author of the paper.

“A likely benefit of large brains is the ability to think flexibly about new situations and come up with solutions to novel problems,” said Holekamp, co-principal investigator at the BEACON Center for the Study of Evolution in Action.

The research was funded in part by the National Science Foundation.