First Data from Daya Bay: Closing in on a Neutrino Mystery

Some of the most intriguing questions in basic physics focus on neutrinos. How much do the different kinds weigh and which is the heaviest? The answers lie in how the three “flavors” of neutrinos – electron, muon, and tau neutrinos – oscillate or mix, changing from one to another as they race virtually without interruption through unbounded reaches of matter and space.

The last elusive mixing angle is dubbed θ13 (theta one-three) and holds clues to how electrons and their cousins, muons and tau particles, were born in the moments after the big bang. Knowing θ13 could explain why there is more matter than antimatter in the universe – and indeed why there is any matter at all. 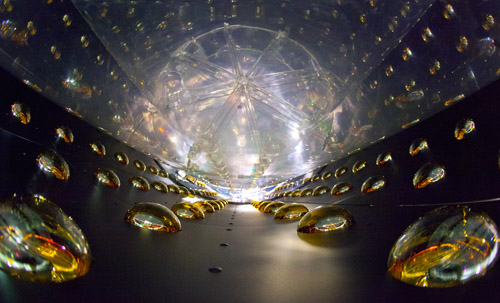 “The first data from Daya Bay set us on a path to precision that’s an order of magnitude better than present measurements and much more precise than other experiments now in progress,” says Daya Bay co-spokesperson Kam-Biu Luk of Berkeley Lab’s Physics Division, a professor of physics at the University of California at Berkeley. “We’ll measure the amplitude of the oscillation due to the least-known mixing angle to within one percent. The results will be a major contribution to understanding the role of neutrinos in the evolution of basic kinds of matter in the earliest moments after the big bang.”

Data for the Daya Bay Experiment will be collected by eight large detectors buried deep underground in the mountains adjacent to the six powerful nuclear reactors of the China Guangdong Nuclear Power Group in southern China, not far from Hong Kong. Nuclear reactors produce enormous quantities of antineutrinos (which in most vital respects are identical to neutrinos), and the reactors at Daya Bay yield millions of quadrillions of them every second.

Three experimental halls house the detectors, which will measure mixing angle θ13 by comparing the flux and energy distribution of interactions in the pairs of detectors in Halls 1 and 2, each about half a kilometer from the nearest reactors, with the four detectors in Hall 3, which is about two kilometers from the reactors. The very first data are now being recorded in Hall 1.

The detectors are filled with liquid scintillator, lined with photomultiplier tubes, and shielded from cosmic rays and other background noise. They pinpoint antineutrino interactions by their faint flashes of blue light inside the vessels. Such interactions are exceedingly rare. Somewhat over a thousand a day will be caught by the near detectors, and only a few hundred a day by the far detectors.

“To achieve our one-percent goal, the differences in sensitivity among all eight detectors must be almost imperceptible, to within four-tenths of a percent of one another,” says William Edwards of Berkeley Lab’s Physics Division, Daya Bay’s U.S. Project and Operations Manager. “Although all data will contribute to the measurement, initial data-taking will be aimed at understanding the systematics of the antineutrino detectors in Hall 1 – basically to find out how identical they are.”

Hall 2, the other near hall, is expected to begin taking data this fall. As more data flows in, the upper limit on the value of the θ13 measurement will continue to trend lower.

“When the Far Hall comes on line next summer,” says Edwards, “the limit will drop like a rock. We’ll achieve a sensitivity on the measurement that is not possible with any other detector now planned or under construction.”

From two to three years of data collection with all eight detectors will be needed to meet the goal of measuring the oscillation amplitude of θ13 to within one percent. It’s a sensitivity not expected to be surpassed for a long time to come.